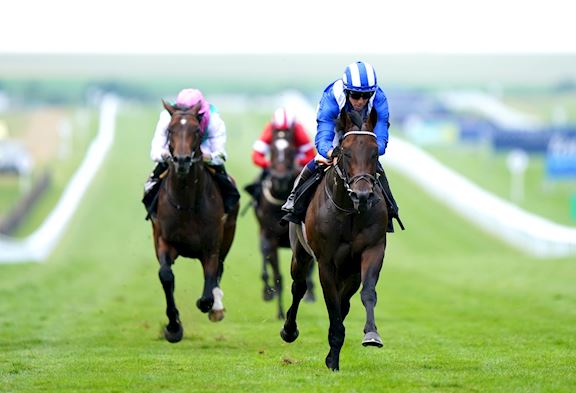 Newmarket trainer William Haggas gained some compensation for the defeat of 1-2 favourite Al Aasy in the Group Two Princess of Wales’s Tattersalls Stakes when Baaeed made it three wins from as many starts in the Listed Edmondson Hall Solicitors Sir Henry Stakes.

Shadwell’s homebred three year old Sea The Stars colt has previously been successful in mile contests at Leicester and Newmarket and had little difficulty following up his July Course victory last month as he took today’s contest by four length, justifying 10-11 favouritism.

Haggas said: “He is looking talented. He has got speed but his brother (Hukum) is a mile and a half horse. He is an exciting horse I think.

“His pedigree suggests that a mile and a quarter is what he wants but the style of his racing doesn’t say that. We will see. I don’t think there is any hurry to step him up in trip at the moment

“I thought it was a really good Listed contest. For him to do that, come from the back and show a smart turn of foot is a good sign. He has had three quite quick races so I don’t know what we do next but I won’t miss a good entry.”

Referring to Al Aasy’s earlier defeat, he added of Baaeed’s victory: “That has cheered me up a bit.”

Jockey Jim Crowley added: “He has given me a very good feel. He has obviously progressed from his last run but that is the first time I’ve ridden the horse and I was very impressed with him.

“He put the race to bed very quickly and he did everything right. It was a nice performance.

“This lad has more speed than Hukum, who is a very good horse. I would imagine he will be kept at a mile for now while he is winning races like that but he will get further but there is no need to go up in trip at the moment.

“He is doing everything right. He is well bred and physically a nice horse so hopefully he can keep going.”

Path Of Thunder (9-4 favourite) gave Godolphin, trainer Charlie Appleby and jockey James Doyle a 7.1-1 double on the day when taking the concluding John Deere Handicap over a mile.

The four year old Night Of Thunder gelding clearly benefited from the application of first-time blinkers and pulled clear in the final furlong to score by three lengths from Tenbury Wells (8-1).

Appleby said: “He is a previous course winner and is a consistent little horse to be fair.

“We just changed the headgear this time and put a pair of blinkers on and he has travelled well. When James has gone to pick him up, he put the race to bed he has hit the line quite strong in the end.

“He has always been a Dubai type of horse so whether he has another run over here or we pack him up and send him to Dubai, we will review that next week.