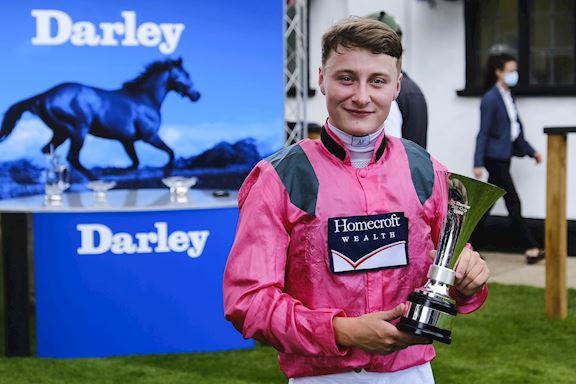 Cieren Fallon believes the line-up for this year’s Darley July Cup is “one of the best ever”, as he bids to become the first jockey since Lester Piggott 62 years ago to win back-to-back renewals of the Group One contest on the same horse.

The 23 year old partners Oxted on Saturday (July 10th) as they attempt to emulate Piggott and Right Boy’s 1959 feat of successfully defending the sprint crown at Newmarket’s July Course.

Victory in the race on Oxted 12 months ago was the first ever top level success of Fallon’s career and the Roger Teal-trained five year old will line up in the Moet & Chandon July Festival’s feature race in top form again this time around, having run out a decisive winner of the King’s Stand Stakes over five furlongs at last month’s Royal meeting.

However, while Fallon is confident of another big run on Saturday, he concedes that Oxted will have to produce a career best effort if he is to win the six furlong prize for a second year running.

He said: “I’m very excited. It’s another Group One and we’re going in there with a very good chance after a great win at Royal Ascot.

“He’s coming up against horses he’s not raced against previously as well as horses who have beaten him, so we’re going to need a career best out of him. But if he puts his best foot forward the other horses are going to have to do the same to challenge him.

“It’s going to be a tough ask, but hopefully Roger (Teal) and the team at home can get him there in peak condition and hopefully I get a lot of luck in running and can prevail again this year.”

Victory in the Darley July Cup last year might have been in front of empty stands, but it is still a day that Fallon will never forget.

He explained: “It’s going to be a really exciting race for neutrals and for racing and it will probably be one of the best ever renewals on paper that we’ve seen, so hopefully it can live up to that.

“The July Cup was my first ever Group One winner and it’s a race that I’ll always remember. If we win it again, nobody will need to ask me what’s my favourite race, favourite track and favourite horse!”