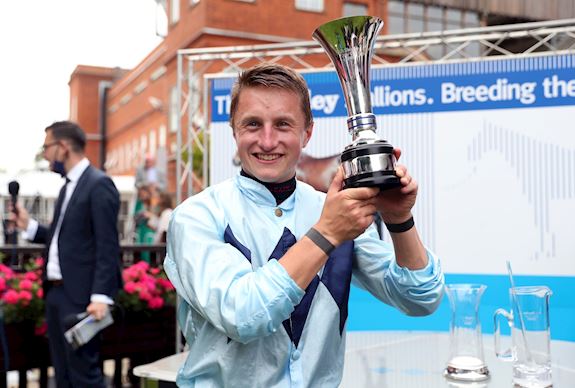 Day three of the Moet & Chandon July Festival is one of the great days of the Flat racing season – Darley July Cup day at Newmarket.

Staged over six furlongs the feature race was first run in 1876 and now forms part of the QIPCO British Champions Series as one of the leading Group One contests on the calendar.

This year Oxted was bidding to become the first horse to win consecutive July Cups since Right Boy in 1958 and 1959 in what looked to be one of the most exciting renewals for years.

It had been billed as the most competitive Darley July Cup in years and when the stalls opened it certainly didn’t disappoint.

The sprint division is currently packed with talented young speedsters and in the days leading up to the festival’s feature race it seemed no two pundits could agree on the outcome.

Step forward Starman, a four year old colt making only his sixth appearance on a racecourse. Despite remaining unraced as a two year old he notched up three victories from four runs last year and had already won at York in May this term.

Little wonder Tom Marquand – riding in the race for the first time - described him as “the closest thing you’ll get to a racecar” after landing the most prestigious prize of the week here.

The Dutch Art colt, owned and bred by David Ward, was delivered perfectly by his rider to hit the front heading into the final half-furlong and came home a length and a quarter to the good over 7-2 favourite Dragon Symbol with last year’s winner Oxted (11-2) a further short-head away in third.

Delighted trainer Walker said of his first ever Group One winner: “It is great. It has taken its time but better late than never as they say! It is a great feeling.

“I’ve believed so much in this horse and I’ve put a lot of pressure on myself and on him because the belief was there and it was great that it was vindicated.”

Defeat for Oisin Murphy, rider of runner-up Dragon Symbol, was harder to take than for most having turned down the chance to partner the eventual winner.

He said of Starmam: “He’s a very good horse and I’m thrilled for Ed Walker. I was given the choice and I picked the wrong one but I’m thrilled for their team and they’re having a fantastic season.”

Not since Mine in 2006 had a horse successfully defended the bet365 Bunbury Cup and Motakhayyel’s feat in doing so was all the more impressive with a top-weight of 9st 10lb on his back.

Returned at 11-2, the Shadwell-owned and Richard Hannon-trained Heeraat gelding raced prominently under Frankie Dettori and pulled away from his 17 rivals in the final furlong for a comfortable three and half-length success in the seven-furlong heritage handicap. Fundamental was second, with Lord Rapscallion another length and a quarter away in third.

Richard Hannon, saddling his fourth winner at this year’s festival, said: “He’s a gentleman of a horse and has been for years. He’s such a pleasure to have around and whoever rides him he does his thing, but he’s struggled and is sort of between a rock and a hard place with his handicap mark and running in Listed races.

“He ran a very good race here in the Criterion Stakes and I watched it on the same screen as I watched him last year.

“We’ll speak to Angus (Gold) and Richard (Hills) and see what they want to do next.”

Winning jockey Dettori added:  “It took me by surprise as I still had a double handful two out but in handicaps he’s very good. Richard called me and told me that Jim (Crowley) was going to York and I couldn’t do the weight on John (Gosden)’s horse (Fundamental).

“He said to me ‘look, get on this horse because he loves Newmarket’ and he was right. I didn’t expect him to be right! I got a nice run into the race from Hollie (Doyle, Lord Rapscallion) and I never saw a horse after that.”

NO HANGOVER FOR BUICK WHO RETURNS WITH A BANG

William Buick used his 11-day suspension as an opportunity to go on his stag do and celebrated with a double of a different kind here on day three.

The jockey showed no signs of a hangover as he returned to the saddle for the first time to win on two impressive Godolphin horses.

The second of them, Native Trail, is clearly a talented two year old and combined his considerable size with speed to land the Group Two bet365 Superlative Stakes at odds of 11-4.

Afterwards Buick said: “I was very impressed. He’s a very imposing horse and I loved him the first time I saw him. He’s a very raw horse but when he had something to race against he kept finding more. He’s the most gorgeous looking horse and very talented too.

“The guys at the yard would know a lot better than me but what I do know is that he’s very good with all his work and you can’t throw enough at him. He’s just a lovely horse.”

Asked if the talented two year old could be a QIPCO 2000 Guineas contender next year, Buick added: “That would be very unfair on the horse to look that far ahead. He’ll keep building on this and take one step at a time. Charlie and His Royal Highness will decide on the plan.”

Earlier, three year old Dubawi colt Royal Fleet had maintained his unbeaten record when taking the bet365 Mile Handicap. Previously successful at Kempton Park and Yarmouth he is still showing signs of inexperience and was noticeably keen in the early stages here, but powered home by half a length from Latest Generation.

Buick said: “He’s got a lot of ability and he just makes life hard for himself. We were going slow and he wanted to go left which is a bit of a habit. I didn’t have much of a choice but at least we had the rail.

“He’s done well to win. He’s possibly a horse who could get another couple of furlongs but he’s a nice horse.”

Referring to his recent 11 day ban following Royal Ascot, he added: “I had my stag do which I’ve had time to recover from but it’s great to be back.”

BERMUDA TRIANGLE SHAPING UP TO BE A FILLY GOING PLACES

We’ve seen plenty of horses who are going places this week and you can add the talented Spirit Of Bermuda to that list after victory in the Bedford Lodge Hotel & Spa Fillies’ Handicap over seven furlongs.

The Twilight Son filly was given a 6lb rise in her rating following an impressive success at Leicester last month but it proved no barrier here.

She was prominent throughout under Tom Marquand and was not for passing inside the final furlong as she saw off all comers to win by three quarters of a length at odds of 12-1 from Rising Star (33-1).

Winning trainer William Haggas said: “She loves fast ground and is a good galloping filly - she has won well today.

“I said to the owners that if she won today she would be worth having a shot at a Listed race next, so that’s what we will be doing.”

It was a Moët & Chandon July Festival to remember for trainer Richard Hannon who saddled four winners at the three-day meeting.

The third of them - Ardbraccan - won the day’s opening contest, the seven-furlong Rossdales British EBF Fillies’ Maiden in the hands of Sean Levey and looks to have a bright future.

The two year old daughter of Lawman was making her third racecourse appearance and built on the promise of her second over the course and distance last month, taking command in the final furlong to secure a half a length victory from 11-8 favourite Calm Skies.

Trainer Hannon said: “She’s a lovely filly and always has been very classy. She ran very well last time and got beaten. It looked like the Godolphin horse (Calm Skies) got to her very easily there and that we bumped into a good one.

“I’m very tempted to bring her back here for the Sweet Solera (Group Three contest over the course and distance on Saturday 7th August).  She has a lot of class. She doesn’t want too much this year as she will be a lovely filly next year. I’ve also got a share in her.

“Her first run was OK but apparently the form of the race hasn’t turned out to be very good and her next run back here was a very nice run and she was just touched off. I thought she would go very close today.”