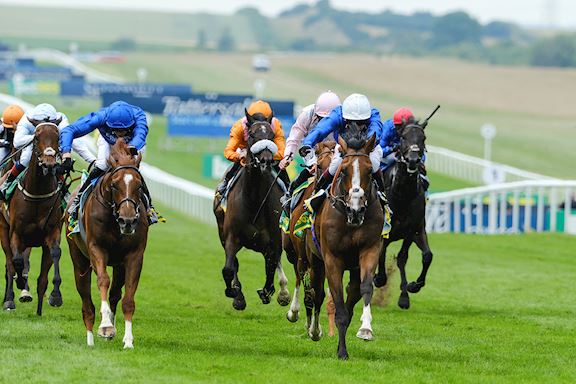 When it comes to a Summer’s day at the races, there is nowhere quite like Newmarket’s July Course.

This year’s Moet & Chandon July Festival burst into life on Thursday as fashion and entertainment complimented a fantastic seven races.

And day two of the three day spectacular was just as thrilling. Here Ben Cox picks out five things we learned on the day …

Stood in his kitchen last Saturday morning Richard Hannon recalled a race which took place eight years ago as if it were yesterday.

Speaking to our writer Graham Clark, it couldn’t be clearer that the trainer still smarts when he thinks about Sky Lantern’s defeat in the Tattersalls Falmouth Stakes at the Moet & Chandon July Festival of 2013.

The result was the subject of a stewards’ inquiry and, despite Sky Lantern having been struck by a rivals’ whip, officials upheld Elusive Kate’s victory by a neck.

Hannon could be forgiven, then, for describing his runner in this year’s race – Sky Lantern’s own daughter Snow Lantern – as having “a score to settle” when we caught up at his home in Marlborough, Wiltshire last weekend.

And when it came to the crunch the three year old did exactly that in a renewal of the Group One contest which will live long in the memory of anyone lucky enough to be among the 4,000 spectators on course.

Jockey Sean Levey delivered the galloping grey perfectly inside the final two furlongs to deny this season’s QIPCO 1000 Guineas winner Mother Earth by half a length.

Hannon, understandably, was overjoyed and couldn’t resist casting his mind back to 2013. He said: “It is very special because there was a score to settle in terms of Sky Lantern.

“The stud, Rockcliffe Stud, hadn’t bred a Group One winner until today. Normally the Falmouth there are two or three nice fillies but all the good fillies were there and she showed how good she was and what she was capable of.

“I’m very hopeful she will stay in training next year. I love her. These Group One races you need to be at your best and there are no weak ones at all. I I’m delighted to win one and not be unlucky for a change.”

Sandrine maintained her unbeaten recorded and registered her biggest success to date in the six furlong Group Two Duchess of Cambridge Stakes (sponsored by bet365).

The two year old Bobby’s Kitten filly, who was homebred by Kirsten Rausing, took command inside the final furlong and was the comfortable length and three quarter winner from Desert Dreamer (11-2).

Returned at odds of 11-5 today, Sandrine had previously scored on debut in a Polytrack novice contest at Kempton Park in May, before triumphing in the Group Three Albany Stakes at Royal Ascot last month.

Successful trainer Andrew Balding said: “It was very good. She got a little bit lonely in front I think but she’s got a lot of ability, which is exciting. She’s so relaxed as well which I hope bodes well for her chances of staying a mile next year.

“I think she’ll stay fine and she’s just got a lot of class and physical scope as well. She’s not a compact two year old type - she’s got a lot of length and depth about her which gives her a chance of developing into a nice three year old as well.

“I don’t really want to travel her at this stage and our only Group One options at the moment are in France and Ireland, so I think we’ll just have to give her a little break and gear her up for the Cheveley Park Stakes.”

For winning jockey David Probert it was the latest in a line of recent successes, although he admitted afterwards that he is still dreaming of an elusive first victory at the very highest level.

He said: “I’ve got a lot of owners and trainers to thank for my season so far. I’ve had some great opportunities this year and although I’m yet to get to that Group One winner in this country we’ll keep trying and hopefully we might have seen her today.”

DOYLE AT THE DOUBLE TO LAND OPENING TWO CONTESTS

Nothing boosts the confidence of a jockey quite like winning the first two races of the day and that’s exactly how James Doyle began day two of the Moet & Chandon July Festival.

Doyle is taking advantage of Godolphin’s number one rider William Buick’s ongoing 11 day suspension to handpick all the best rides for the boys in blue.

That resulted in two winners on the opening day of this festival on Thursday and was quickly followed up with another brace today.

In the first race, the Weatherbys Bloodstock Pro British EBF Maiden Stakes for two year olds, Godolphin’s Noble Truth showed the benefit of having a run under his belt when fending off the impressive late charge of Ehraz.

And little more than half an hour later Doyle was at it again, this time sending Dubai Honour forward inside the final quarter of a mile to see off the determined Foxes Tales, a Royal Ascot winner last month.

Dubai Honour also ran at the royal meeting, finishing fourth in the Britannia Stakes, and trainer William Haggas was delighted. He said: “I’m thrilled with that. I thought it might be a bit quick just 22 days after Ascot with that being his first race of the year - he’s clearly not a bad horse and he’s improving all the time.

“I’d like to thank Laura Collett, who’s about to represent Great Britain in the Olympics. She took this horse on for about two months in the winter because we lost him mentally. We sent him up to there and she brought him back a different horse, so although I get all of the glory she did a lot of the work to get him back for us and I’d like to thank her publicly.”

There was more reason to celebrate for Godolphin when Live Your Dream led home a 1-2 for the royal blue silks in the bet365 Trophy Heritage Handicap over a miles and three-quarters.

The four year old Iffraaj gelding was well-supported into 7-2 favouritism and made a stunning run to come from last to first under Oisin Murphy, taking the lead a furlong out and settling the contest by a comfortable three-quarters of a length.

Trainer Saeed bin Suroor said: “He has improved, this horse, and he has been doing well.

“He was a bit weak in Dubai last year but this year he has improved physically and with the trip. If you look at his pedigree, Iffraaj was a sprinter but this one has just won over a mile and six. He is relaxed in the mornings and I’ve always liked him.

“There are going to be two races for him. We will maybe take him to Newbury for the Geoffrey Freer or maybe the Ebor at York. He is doing well all the time. He will be a nice horse for the future in all the staying races. Any ground he can handle.”

Bahrain’s new racing series was only launched 24 hours ago but we might well have found a serious contender for it in George Scott’s La Maquina, who flew home to win the Cash Out At bet365 Handicap Stakes.

Building on the success of the Bahrain International Trophy, a brand-new 10-race turf series will begin in Bahrain from this December with a total prize fund of £550,000 for horses rate between 85-100.

And Thursday’s announcement has certainly peaked the interest of trainer Scott, whose winner here had barely set foot in the winner’s enclosure when he was talking about the series as an option for the six year old.

He said: “We could go to Bahrain. He was bouncing off this quick ground so he could easily be one for over there, particularly this new 85-100 series.

“We’re delighted with him and he’s a horse who’s had a few little issues. He’s got a silly quarter crack on his hoof – which is like a split finger nail for us – it’s nothing but it’s really sore and it’s just really annoying.

“We’ve got a specialist farrier who looks after him all the time and we’ll probably go to Goodwood next and then possibly Bahrain. We’ve put a few of our eggs into the basket over there and I’m excited by it.”