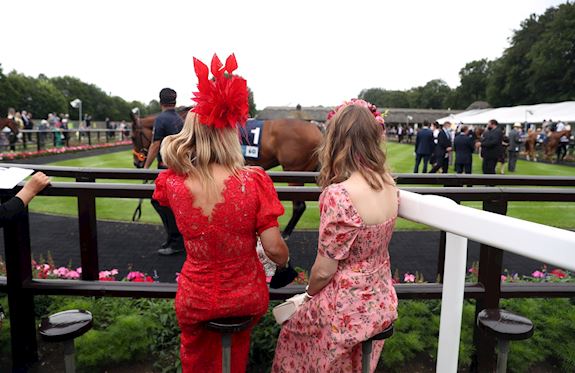 Football, in case you hadn’t heard, might well be ‘coming home’. Fitting, then, that just hours after England’s footballers reached their first major tournament final since 1966, Flat racing returned to its ‘home’ in Newmarket for the Moet & Chandon July Festival.

Day one of the three day spectacular is Ladies’ Day. And while ongoing restrictions continue to limit the number of spectators on course to 4,000, there was still an impressive mix of racing, fashion, food and entertainment.

Few horses will put in a more determined performance on the July Course this season than Sir Ron Priestley’s in the Princess of Wales’s Tattersalls Stakes.

After making every yard of the running in the mile and a half feature race of the day, jockey Franny Norton hailed the five year old as a “proper warrior”.

‘Sir Ron’ – as he’s known at trainer Mark Johnston’s yard - was successful over the same distance in the Group Two Betfair Exchange Jockey Club Stakes on the neighbouring Rowley Mile at the start of May.

And he had to be on his A-game to repeat the feat here, facing down a strong challenge from 1-2 favourite Al Aasy in the final furlong to keep finding more and hold on gamely to take the honours by a head.

Jockey Norton said: “To be honest, he slipped his back feet coming out and I was worried for a couple of strides. We knew nothing was going to go on and we were able to pick up his rhythm and get into his own pace.

“Sir Ron is a proper warrior. Al Aasy had a good go and I felt the last 100 yards or I was just emptying out a bit, but I thought that I’d done enough to kill it off.”

It’s one of the most high profile races at this three day festival and a contest the Hannons just love to win.

So it was no surprise when Lusail handed the family a remarkable ninth victory in the Group Two Tattersalls July Stakes, fending off his rivals to secure the six furlong contest for two year olds.

It was a third success in the race for trainer Richard Hannon following Ivawood (2014) and Mehmas (2016), the sire of Lusail, while Hannon’s father Richard Hannon Sr, saddled the winner on six occasions.

Returned at 15-2, the Mehmas colt needed a photo finish to confirm his victory by a head from Asymmetric (11-1) with the third, Sam Maximus (40-1), another head further back after a thrilling three-way tussle inside the final furlong.

Trainer Hannon said afterwards: “I thought Lusail deserved to win - he ran around a bit going to the line but it was a big shout going back to six furlongs and he’s done it very well.

“It’s a bit of a cliché but he’s come back in trip, he’s extremely relaxed and I think we’ll take him to Goodwood, that’s a certainty, but whether we’ll go over six or seven (furlongs) we’ll see.

“He wasn’t really high up in our pecking order at home to be honest. He’s worked OK and we took him to York and he went there and won. We can go further with him yet and just like his sire, Mehmas, he’s extremely honest and very chilled out but he will get further and I don’t think he’s just a two year old.”

For a while in May it looked like Yibir might be lining up in the world’s greatest Flat race, the Cazoo Derby at Epsom Downs.

Ultimately trainer Charlie Appleby decided he had better contenders for the Classic and pulled him out five days before the race – a decision which proved justified when stablemate Adayar went on to claim the prize under Adam Kirby.

However, Yibir proved just what a talented three year old he is here on day one of the July Festival, securing a comfortable two and a half-length victory in the Group Three Bahrain Trophy over 1m 5f.

Racing in the famous blue silks of Godolphin, the now-gelded son of Dubawi and partner James Doyle took up the running entering the final furlong and never looked in any serious danger.

Appleby praised Yibir’s work-rider after the victory and explained: “Shane Fetherstonhaugh I have to give a lot of credit to as he is the man that has tried to keep a lid on him every morning and he has done a great job.

“He was the first person I called to congratulate as it can sometimes be frustrating when you are sat on these good horses and they don’t deliver on an afternoon, but he has got the job done today and it is a great team effort to get him back on winning ways.

“We left him in The Derby until the five day stage but we felt he wasn’t going to come up to scratch in The Derby. He ran in the Cocked Hat and came a good second to a horse that ran well in the Irish Derby.

“He has opened himself up to plenty of options but we are very fortunate that the three year old middle distance camp is very strong. He is a horse that we will put back in the pack and then start to deal them out over the next three to four weeks of who is going where and doing what.”

Newmarket trainer William Haggas gained some compensation for the defeat of his odds on favourite Al Aasy in the Princess of Wales’s Tattersalls Stakes when Baaeed made it three wins from as many starts in the Listed Edmondson Hall Solicitors Sir Henry Stakes.

Shadwell’s home-bred three year old Sea The Stars colt has previously been successful in mile contests at Leicester and Newmarket and had little difficulty following up his July Course victory last month as he took today’s contest by four lengths, justifying 10-11 favouritism.

Haggas said: “He is looking talented. He has got speed but his brother (Hukum) is a mile and a half horse. He is an exciting horse I think.

“His pedigree suggests that a mile and a quarter is what he wants but the style of his racing doesn’t say that. We will see but I don’t think there is any hurry to step him up in trip at the moment.”

Jockey Jim Crowley added: “He has given me a very good feel. He has obviously progressed from his last run but that is the first time I’ve ridden the horse and I was very impressed with him. He put the race to bed very quickly and he did everything right. It was a nice performance.

“This lad has more speed than Hukum, who is a very good horse. He is doing everything right. He is well bred and physically a nice horse so hopefully he can keep going.”

FRANKELLA LIVES UP TO HER PEDIGREE AT THIRD TIME OF ASKING

Few horses in training can boast a pedigree as outstanding as Frankella, who was successful in the opening British Stallion Studs EBF Maiden Fillies’ Stakes over six furlongs.

The two year old filly is by the outstanding Frankel and out of Arabian Queen, who landed the Group One Juddmonte International in 2015.

Home-bred by owner Jeff Smith and trained by Andrew Balding, Frankella had finished out of the money on her first two starts at Salisbury but there was a lot to like about her success here as she battled on gamely to score at odds of 20-1 by half a length from Princess Shabnam.

Winning jockey Oisin Murphy said: “She’s got a really good pedigree and it’s a great result for the family. She improved going back to six furlongs on better ground and hopefully she’ll build on this.

“She’s not very big but her dam wasn’t very big and she was very talented. I’d be very hopeful that this filly progresses – she’s certainly stepped up on her first two runs.”