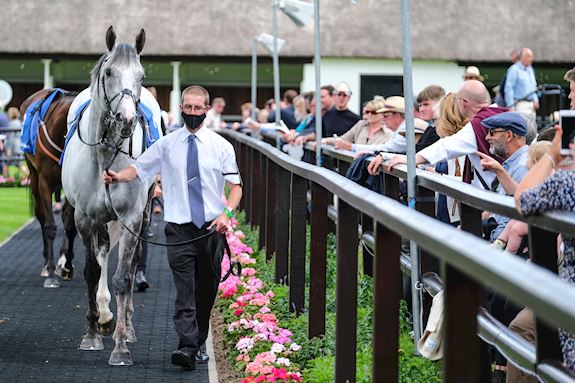 Connections of Free Wind are confident they have found the “right fit” for the hat-trick seeking filly, who takes a step up in class and trip in the Ric and Mary Hambro Aphrodite Stakes at Newmarket tomorrow (Saturday 17th July).

The John and Thady Gosden-trained daughter of the late Galileo will attempt to back up victories at Goodwood and Doncaster this season when testing her credentials against Listed opposition for the first time in her career.

With the step up to a mile and a half expected to suit Free Wind, connections are hopeful the George Strawbridge-owned three year old can continue her progression.

Thady Gosden said: “She has done well in her first two starts this year. She won well at Goodwood then backed it up under a penalty last time out at Doncaster.

“Both those starts were with a bit of cut (in the ground) and we are not going to get any rain so hopefully the ground won’t be too lively for her. She is stepping up in both class and trip.

“There is not a worry over the trip and the race looks the right fit for her. It is competitive enough but she seems to have come forward for her last run.”

Victory for Free Wind would be a first in the race for the Gosdens as a training partnership. However John Gosden has already claimed the prize on six occasions.

Arguably his most notable winner of the contest was multiple Group One scorer Dar Re Mei in 2008.

Gosden junior added: “Dad has won this with some nice horses in the past. Free Wind only had one run at two, which we were keen to do before she had another winter on her back.

“As it turns out it wasn’t a bad run as she finished behind the filly of ours Loving Dream that won the Ribblesdale.

“She is one of those that comes alive in the afternoon as she is not a flashy work horse. It is competitive enough but she seems to have come forward for her last run.”

Meanwhile Owen Burrows expects recent Salisbury scorer Talbeyah to have plenty in her favour on her first attempt over the trip.

It will be the second time this season that the Lope De Vega filly has raced at Listed level after she finished fourth on her penultimate start in the Height Of Fashion Stakes at Goodwood.

Burrows said: “She is a progressive filly that has won two novices so it would be nice to get a bit of black type with her.

“She was fourth in the Height Of Fashion at Goodwood so she just missed out on it there but the conditions that day were horrendous.

“She gets plenty of weight for age like the other three year olds but I’ve been pleased with her and a mile and a half on better ground is going to suit her.

“She won on fast ground at Salisbury last time out. There are a lot of positives so we will see what we can do.

Hugo Palmer hopes four year old Golden Pass can put her assured stamina to good use by successfully giving weight away to her younger rivals and going one better than at the same level on her most recent appearance at Pontefract.

He said: “I was thrilled with her performance at Pontefract and everything has gone well since. She has always been fragile and immature but she has never taken a race as well as the one at Pontefract. She ate up well and has moved like a treat.

“She is a very big filly who is taking a while to mature but she is getting stronger. She stays very well and if she runs a big race on Saturday I’d like to try her over further. She is in the Lillie Langtry at Goodwood, but that might be too soon.

“She has a good looking pedigree and already has her black type. I would be delighted if she can win one, though she has to give lumps of weight to the three year olds.”

Pam Sly expects Listed bumper winner Eileendover to bounce back to form after the four year old was found to be in season prior to finishing behind Golden Pass at Pontefract.

Sly said: “Hopefully she will run better than last time but she came into season when we got to Pontefract. Shane (Kelly) had come up and I had five people come to watch her so we let her run, but she was only beaten five lengths.

“We’ve gone the full three weeks now (of her being in season) so hopefully she should be better this time.

“I’m not too concerned about the ground as she appears to go on anything. If she could get into the first three and get some more black type that would be great.”

Elsewhere on the seven race card trainer Eve Johnson-Houghton is counting on the return to a sounder surface helping stable stalwart Accidental Agent score for the first time in more than three years in the Fine Watch Club Handicap.

The seven year old will bid to secure a first victory since landing the Group One Queen Anne Stakes at Royal Ascot in 2018, which he finished seventh in this year, after finding soft ground working against him at Sandown Park last time out.

Johnson-Houghton said: “Accidental Agent is in great form. He is starting to drop down the weights so hopefully he will be competitive while Georgia Dobie takes 5lbs off.

“It was soft, sticky ground at Sandown last time and he was carrying a big weight, but before that he had run well in the Queen Anne at Ascot. He has been a really old favourite of ours so hopefully we can get him back.”

The Gosdens hope a recent gelding operation will do the trick for Rifleman, who unseated Ryan Moore at Sandown Park on his return before finishing third on his most recent start at York following a late scare.

Thady Gosden said: “He has been gelded and though I don’t want to speak too soon, he does seem better behaved, so hopefully he can bring that to the track.

“He has got ability but he just needs to concentrate on how to use it. He should like the track and going back up to a mile will help.”