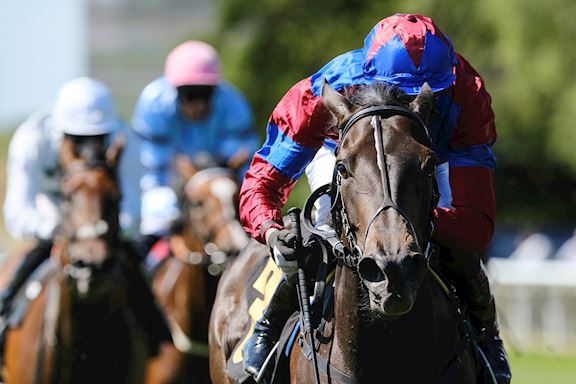 Golden Pass could well have earned herself a place at Glorious Goodwood at the end of the month with her pillar to post in the feature Listed Ric And Mary Hambro Aphrodite Fillies’ Stakes while veteran Accidental Agent, who enjoyed his finest hour in the Group One Queen Anne Stakes at Royal Ascot in 2018, handed connections an emotional victory.

We sent Graham Clark along to speak to the winners on the afternoon….

Golden Pass set up a tilt at tackling Group race opposition on her next start after securing the most significant victory of her career with a tenacious front-running success in the Ric And Mary Hambro Aphrodite Fillies’ Stakes.

Having filled the runner-up spot on her previous appearance at Listed level 27 days ago at Pontefract, the Hugo Palmer-trained daughter of 2015 Derby hero Golden Horn went one better in the same grade with a game display in the mile and a half feature.

Enjoying a trouble free run out in front under James Doyle the 2-1 favourite pulled out extra when pressed by eventual runner-up Free Wind, who was seeking a hat-trick following wins at Goodwood and Doncaster, before scoring by three quarters of a length.

Palmer said: “She was beautifully ridden. She has been an immature filly who has been very delicate.

“Every time we have run her she would fall in a heap and have to have 10 days in a field that is why it has endlessly been six weeks or six months between races.

“She goes on most ground and is unbelievably genuine as you can see. She wasn’t doing a tap in front and was almost willing for them to take her on through the last few furlongs.

“She just collared late home at Pontefract and she didn’t have the chance to fight back but she had all the time in the world today to fight back and she got back.”

Assessing future plans Palmer hinted that an outing in the Group Two Qatar Lillie Langtry Stakes at Glorious Goodwood on July 31st could be next on the agenda.
Palmer added: “The Lillie Langtry is two weeks away today which she is entered in. It is an obvious target and we have the next 12 days before we have to make a decision. We are going to have to see which way we go.

“I’m sure she will get the extra two furlongs there and who knows she could be a Cup horse next season. That is if she stays in training, as she is owned by an owner/breeder (Dr Ali Ridha) who is accumulating a beautiful broodmare band.”

ACCIDENTAL AGENT BACK IN FRONT

Eve Johnson Houghton admitted stable stalwart Accidental Agent “brought a tear to her eye” after securing his first success since the 2018 Queen Anne Stakes at Royal Ascot when finishing with a flourish to land the Fine Watch Handicap.

Having given Johnson Houghton the biggest winner of her career when claiming Group One glory at the Royal meeting three years ago the gelded son of Delegator ended a lengthy losing spell when obliging by half a length in the mile prize.

Johnson-Houghton, speaking from Newbury, said of the 12-1 winner: “It’s brought a tear to everybody’s eye in the whole of the yard. I’m made up for him.

“I didn’t think they were going fast enough but Georgia (Dobie) gave him a brilliant ride. I told her to ride him with a smile on her face and enjoy riding a horse like him and it has translated into the reins.

“I thought he would be competitive but I thought he might need another to come down a little bit more to be in the right place. It is just great to see him win again.”

Value Theory lifted the spirits of owner Dr Jim Walker and trainer Mark Johnston when moving a step closer to a Group race outing after making the most of her previous experience in the opening Lettergold British EBF Fillies’ Restricted Novice Stakes.

Just a week after it was announced stablemate, and this year’s Ascot Gold Cup winner Subjectivist, who is also owned by Walker would miss the rest of the season through injury, the Gleneagles filly provided connections with a welcome boost in the seven furlong event.

Racing front rank throughout in the hands of Joe Fanning the 2-1 favourite, who finished third first time out at Kempton Park, quickly put the race to bed when asked for effort to beat debutant Tinderbox by two and a half lengths.

“She was drawn one and missed the break and the whole field came on top of her so she lost her race at the start.

“She stayed on lovely and ran a debut full of promise. We were hopeful she would build on that and that is exactly what she has done.

“It has been a tough 10 days for the trainer, owner and jockey and that is a small token of compensation.

“The Sweet Solera, which is a Group Three over course and distance is an obvious target or we could be a bit more gradual and give her one more quiet run then look at the Prestige at Goodwood at the end of August.”

The Jedd O'Keeffe-trained grey changed gained a first win on turf when holding on by a head in the six furlong contest, run in honour of the British Horseracing Authority’s Chief Medical Advisor to highlight his efforts at keeping the sport going during the COVID-19 pandemic.

Chris Vallice, a member of the successful Titanium Racing Club syndicate, said: “I said to Callum (Shepherd) don’t go too early as when he hits the front he goes left. Megan Nicholls gets a great tune out of him and to be fair Callum gave him a great ride.

“I set off at 7.45am this morning from Darlington and will get back between 8.30pm and 9pm tonight. I will have a little bottle of champagne on the train to make that journey shorter.”

REGALLY-BRED SWEET ENOUGH OFF THE MARK

Sweet Enough has a long way to go to emulate the heights of some of her more illustrious relatives, however she enhanced her paddock value after coming home the decisive winner of the Avenue Bloodstock Maiden Stakes.

The John and Thady Gosden-trained three year old, who is related to multiple Group One winner Halfway To Heaven among others, proved a cut above her rivals in the seven furlong affair when striking gold by the three and three quarter lengths under Robert Havlin.

John Gosden said: “She is a lovely filly with a good pedigree. I like it when they win over seven furlongs on top of the ground as you need that kind of speed in them.

“She ran very well here last time when she was second so she set a good standard. You are always worried about the ones that have had one run and if they will improve forward but they didn’t.”

Equally delighted with the performance of the 7-4 market leader was owner Trevor Harris, who operates nearby Lordship Stud with his wife Libby.

He added: “It was very pleasing. She is from the family of Halfway To Heaven and the pedigree is something else. We purchased her to be a broodmare so she had to win a race and now she has done that."