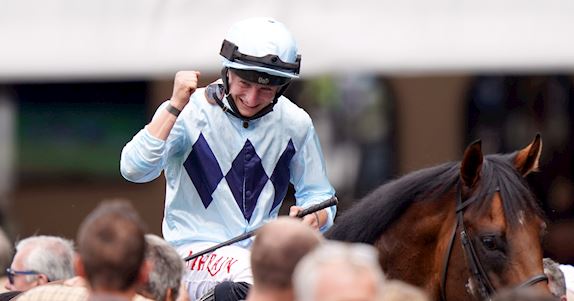 Jockey Tom Marquand enjoyed Darley July Cup success on his very first ride in the six furlong Group One sprint aboard Starman today and insisted the colt deserves to be “in the top tier of sprinting in Europe”.

Owned and bred by David Ward, the four year old son of Dutch Art was the 9-2 second favourite and prevailed by a length and a quarter from 7-2 favourite Dragon Symbol.

The 23 year old jockey said: “This lad is as close to a racecar as you can get.

“He was pretty exceptional and he has confirmed what Ed has been saying all week. I’m not going to lie even I was thinking ‘am I overrating him a little bit?’

“That confidence was justified today and you have to put him in the top tier of sprinting in Europe after that. It was an incredible performance. The last few days everyone has been coming in saying it is one of the best July Cups we have seen for a good while. For a horse that has had six runs I thought he showed relative signs of inexperience still.

“That turn of foot he showed up the hill was nothing short of top class. I was the one that finished second to him at York on Nahaarr and I actually thought I probably should have beaten him that day. He has always felt like he’s not done an awful lot in front so maybe he was just idling until I got there and it sort of flattered the winning distance a little bit.

“This is exceptional and he is a Group One winning sprinter with lots of potential to do a lot more. The nature of sprinting is things happen in split seconds and on the July Course you have those undulations and to be honest it felt like it caught him out a bit at the three pole.

“I was not on the back of the horse I wanted to be on but I was happy with the position as such in the race. Just as things started changing at the three he got a little bit unbalanced and done for a bit of toe but as soon as he levelled off and worked into top gear there was never a moment from a furlong and three quarters out that I didn’t think I was going to get there, which is a rare feeling in a top class race like that.

“Things have been going great and I keep saying that each week but it has nearly racked up to a couple of months now. I’m extremely fortunate and it is nice to get my Group One winner in England on the board this year.

“It is fantastic for Ed and the team at home. The lad Tristan who rides him at home every day without fail does a fantastic job. Ed has managed this horse so well. He has had six runs. He has come into this year and been patient with him. He didn’t run him at Ascot on ground he wouldn’t have liked and wasted a run. He saved him for the big day and it has paid off.”

Marquand was also keen to extend his congratulations and thanks to David and Sue Ward, the owner-breeders of Starman.

He continued: “David and Sue Ward are the most understanding people to ride for. I managed to get beat on Primo Bacio around Chelmsford in a very average race. They are fantastic on the good days but even better on the bad days as they understand and that is why they are such avid supporters of racing as they get it.

“They are not people that expect you to press the accelerator and away you go. They know there is more to it than that and they fully understand things can go wrong but he is as close as you can get to getting on and pressing an accelerator in a car.

“Ed’s comments a week ago were bold and there are no other words to describe it. It is fantastic that Starman has justified them today. You have to have seen something pretty exceptional at home to make you think like that.

“No doubt nerves were kicking in the last 24 hours and that is why Ed might have found a few negatives and he did get a bit warm and had other things on his mind. But he is a top class racehorse and it is brilliant he has fulfilled hype reputation until today as now it is his reputation.

“Any Group One is special as they are hard to win especially on a day like today. I’m very fortunate I ride for the William Haggas stable a lot now. There was a conversation of where I go today.

“Primarily William is my biggest supporter and he had horses all over the country and good horses at that. It makes life pretty tricky when it comes to things like that as loyalty is pretty hard to find in the game and I’ve got that from William.

“Today I think it just came to the fore what a great trainer and person he is in that he let me come here and ride Starman as he had some pretty important horses elsewhere. Days like this are hard to come by and it is fantastic he knew the significance of it.”