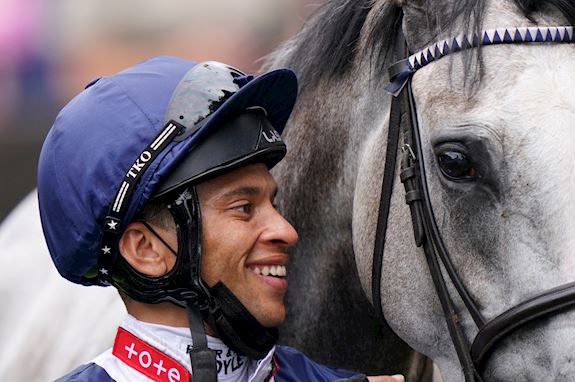 Trainer Richard Hannon hailed Snow Lantern’s victory in the Tattersalls Falmouth Stakes as “very special” and admitted he was relieved to have settled a score eight years after her mother’s defeat by a neck in the same race.

The three year old Frankel filly and jockey Sean Levey were the decisive winners of the Group One feature contest on day two of the Moët & Chandon July Festival, defeating QIPCO 1000 Guineas winner Mother Earth (5-1) and a high class field.

Afterwards Hannon admitted the result provided some compensation following the defeat of her dam, Sky Lantern, in 2013 when the winner Elusive Kate kept the race after a stewards’ enquiry.

Owned and bred by the Keswick family’s Rockclife Stud, Snow Lantern prevailed by half a length, with Alcohol Free, the 5-2 favourite, another neck away in third.

Hannon said: “It is very special because there was a score to settle in terms of Sky Lantern a few years ago. The stud, Rockcliffe Stud, hadn’t bred a Group One winner until today.

“We went to York to try and bag a Listed races but it didn’t work out. She has learned to settle since then and I always thought she was not just good, but extremely good - this filly has a pedigree.

“Sky Lantern is by Red Clubs and she was exceptional and I think this filly is exceptional. She has that pedigree being a Frankel out of a Classic-winning mare. She was a little bit unlucky in the Coronation, as you know, and she looked exceptional when she won her novice at Newbury.

“Normally in the Falmouth there are two or three nice fillies but all the good fillies were there today and she showed how good she is and what she is capable of.

“All you feel is relief more than anything. After she ran at York you are out on a limb and she needed to do something otherwise you look a bit of a plonker. I think she showed that at Royal Ascot on ground that probably didn’t suit her.

“She has been working absolutely awful, as she does, and I took her to Newbury and she worked moderately there. She is one of those fillies that is not moody or anything but she just doesn’t do a lot at home, but she is extremely good.

“I’m delighted for Rockcliffe Stud after everything that has gone on with the mare and she has always created a lot of interest and a big following. Of course you feel immense pleasure but it is more relief than anything.”

“Sean is riding great but a winner like this does an awful lot for him and for us. I think I shouted down there and I never shout because as soon as I shout they tend to stop.

“You look around and all the people were looking at you but they were shouting louder than me. She is a Frankel and he is having a phenomenal year, but her revs are a little bit high sometimes.

“She will get a mile and a quarter I think. She is in Nassau and the Sussex Stakes. I’d probably say she would go to the fillies’ race (the 10-furlong Nassau Stakes at Goodwood). She is also in the Juddmonte International. I’m very hopeful she will stay in training next year. I love her.

“These Group One races you need to be at your best and there are no weak ones at all.I I’m delighted to win one and not be unlucky for a change.”

Aidan O’Brien, trainer of runner-up Mother Earth, said: “She ran very well and we’re delighted with her run. I’m not too sure in terms of where next - there may be a fillies’ race in France for her but we’ll wait and see how she is.

“We’ll keep her to these fillies’ races. We could try her over further but she’s got plenty of speed.”

Oisin Murphy, the jockey of third home Alcohol Free, said: “She relaxed well in front and I just felt the race went to plan apart from at the three (furlong pole) when we got racing a little early. I tried to save horse but the last 50 yards told.”

Kieran Shoemark, who was aboard fourth home, Lady Bowthorpe, added: “It was a good run and I think the 10 furlongs of the Nassau Stakes (at Goodwood) will really suit her. She’ll get the extra two furlongs easy and she was unlucky here.

“She didn’t get the splits so I had to switch out and she’s run well. I have no doubts that she’s the best filly in the race.”