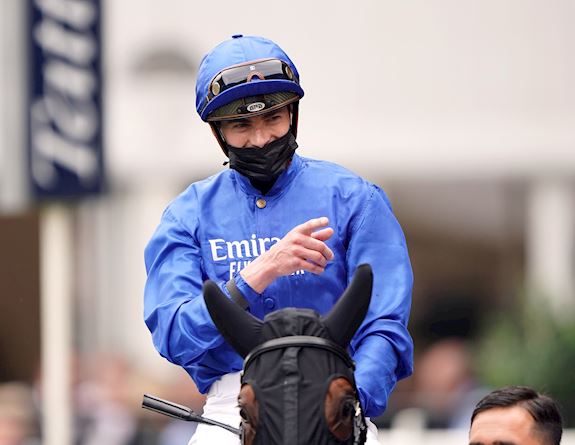 Jockey James Doyle rode two winners on day one of the Moët & Chandon July Festival and continued his fine form to land the first two Friday races for a 21.75-1 double.

The second of his brace - the 11-2 chance Dubai Honour – gave trainer William Haggas plenty to smile about by winning the 10-furlong bet365 Heritage Handicap.

The three year old Pride Of Dubai gelding prevailed after a sustained duel with Foxes Tales in the final furlong, scoring by a head. Afterwards Haggas was keen to pay tribute to Laura Collett, who will represent Team GB in eventing at the Tokyo Olympics later this month and who has worked with the colt.

Haggas said: “I’m thrilled with that. I thought it might be a bit quick just 22 days after Ascot with that being his first race of the year but he won the Britannia on his side (of the track), so he’s clearly not a bad horse and he’s improving all the time.

“I’d like to thank Laura Collett, who’s about to represent Great Britain in the Olympics. She took this horse on for about two months in the winter because we lost him mentally.

“We sent him up there and she brought him back a different horse, so although I get all of the glory she did a lot of the work to get him back for us and I’d like to thank her publicly.

“Goodwood looks the obvious option but we’ll see as the handicapper might put him up for that.”

Trainer Andrew Balding said of his 7-2 runner-up Foxes Tales: “I’m very pleased with him. He has proved he is versatile with ground conditions. It is always tough to give weight away in these competitive handicaps but he is certainly a horse with a bright future. I think he could get further than a mile and a quarter and Goodwood could be a possibility for him.”

Earlier Noble Truth had got the ball rolling for Doyle when clearly showing the benefit of having a run under his belt when taking the opening Weatherbys Bloodstock Pro British EBF Maiden Stakes.

The two year old colt had finished third on debut over today’s distance of seven furlongs on the July Course on June 19th. The winner that day, Lusail, franked the form in no uncertain terms yesterday by landing the Group Two Tattersalls Stakes in impressive fashion.

Here the Charlie Appleby-trained son of Kingman pulled clear from the field to take the honours by two lengths under Doyle. He was returned the 5-2 favourite today and his trainer believes there will be Group races on the colt’s agenda as the season progresses.

Appleby said: “Seeing that performance (from Lusail in yesterday’s Tattersalls July Stakes) gave us more confidence coming into today not that we needed too much as we had seen plenty at home.

“His first run was a bit free there whereas James (Doyle) got him covered up there today and he travelled very strong throughout the race today. He just had to give him a quick tap to get him back and onto his business. Once he hit the rising ground he finished out well and hit the line strong.”

Appleby will now wait before mapping out the rest of Noble Truth’s season and he added: “He is a horse that we haven’t got immediate plans for as he has been headstrong at home. We are just taking it race by race to see which way he is going to go.

“He has the hood on at home and it is vital to him at the moment as he is still far too keen at home. Today I loved the way he walked around the paddock he was nice and professional and relaxed.

“I think we will see him over a mile before the end of the season and he could be a Vertem Futurity Trophy type horse but we will see. He is a nice scopey horse that has hopefully got a nice future as a three year old.”