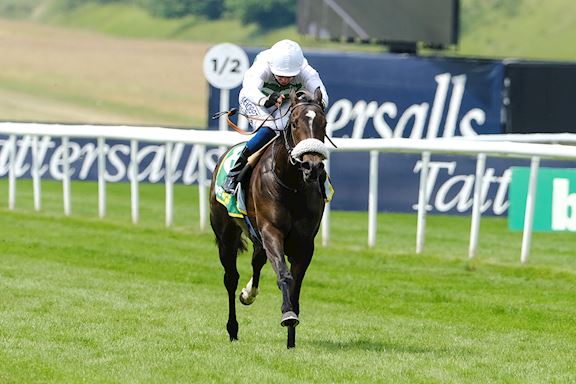 Sandrine maintained her unbeaten recorded and registered her biggest success to date in the six furlong Group Two Duchess of Cambridge Stakes (sponsored by bet365).

The two year old Bobby’s Kitten filly, who was homebred by Kirsten Rausing, took command inside the final furlong and was the comfortable length and three quarter winner from Desert Dreamer (11-2).

Returned at 11-5 today, Sandrine had previously scored on debut in a Polytrack novice contest at Kempton Park in May, before triumphing in the Group Three Albany Stakes at Royal Ascot last month.

Successful trainer Andrew Balding said: “It was very good. She got a little bit lonely in front I think but she’s got a lot of ability, which is exciting. She’s so relaxed as well which I hope bodes well for her chances of staying a mile next year.

“I think she’ll stay fine and she’s just got a lot of class and physical scope as well. She’s not a compact two year old type - she’s got a lot of length and depth about her which gives her a chance of developing into a nice three year old as well.

“I don’t really want to travel her at this stage and our only Group One options at the moment are in France and Ireland, so I think we’ll just have to give her a little break and gear her up for the Cheveley Park Stakes.

“It’s good to prove Ascot wasn’t a fluke and there were a few nerves going into this because she looked so good there. It’s just nice to see that confirmed on different going today.”

Winning jockey David Probert said: “She had to prove herself on that quick ground today and she’s travelled great. She’s got a great temperament and got into a great rhythm throughout the race.

“When we split the pack I was lucky to be able to follow the Ralph Beckett filly through into the race and when the pace lifted just before the two furlong pole, she’s done it with such ease and when I asked her she’s just found many lengths and hit the rising ground really well.”

Asked about potential future targets, Probert added: “It’s not out of the question she’d stay further and she’s very exciting. It’s great for Kirsten Rausing and it’s a massive opportunity for me to keep the ride.

Probert is a jockey enjoying plenty of success but he admitted he is still dreaming of a first Group One victory. He added: “I’ve got a lot of owners and trainers to thank for my season so far.

“I’ve had some great opportunities this year and although I’m yet to get to that Group One winner in this country we’ll keep trying and hopefully we might have seen her today.

“Building up through the ranks at Park House is massive as there’s so many opportunities there and there’s so many great people to learn from. Ian Balding was a great mentor at a young age and Andrew has built through the ranks to take over. He’s always been great to ride for and the calibre of horses seem to have got a lot better over the last few years, so it’s great to be a part of the team there.

“It’s nice to go out there knowing you’ve got a chance and everything I ride I try and give 100% towards them and I’m just grateful that it seems to be paying off.”

Trainer Stuart Williams said of runner-up Desert Dreamer: “I’m very pleased with her. It was slightly unfortunate that the winner was on the other side of the track. If we could have followed the winner through we might have given it a better race but the winner is a high class filly and we are improving. I’m delighted with the filly and with Oisin’s (Murphy, jockey) ride. We live to fight another day.

“She has got a good turn of foot and she is settling very well so I’m very pleased with her. At Royal Ascot we were on the wrong side and I don’t think it suited her the way the race was run.

“I will probably head to the Lowther now where the winner would have a penalty if she wanted to take us on again. I think that is probably the logical route. The Princess Margaret at Ascot will come a bit quick.

“She has had a couple of quick races as we only ran her 13 days ago in the Empress so we will probably wait until the Lowther. York should be fine for her as they will go quick and that will suit her."