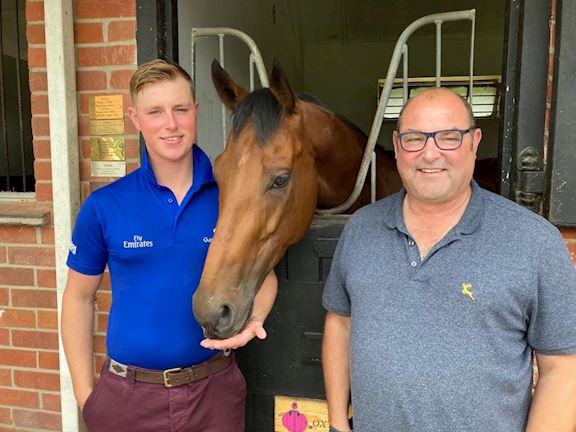 Roger Teal insists Oxted has “no room for error” if he is to become the first horse in 62 years to win back-to-back renewals of the Darley July Cup, but admits he is taking plenty of confidence into the highlight of next week’s Moët & Chandon July Festival at Newmarket (Saturday 10th July).

No horse since Right Boy back in 1958 and 1959 has managed to land successive renewals of the prestigious Group One sprint, however, although history suggests Oxted has it all to do the Lambourn handler is confident his stable star can change that statistic.

Having tasted defeat in his first three outings this year, Oxted ensured he will take plenty of confidence into defending his Darley July Cup crown by returning to winning ways on his first ever start over five furlongs with victory in the King’s Stand Stakes at Royal Ascot last month.

Teal said: “He came out of Ascot excellent and I’m very happy with him. We are delighted with him. We will go into the race with plenty of confidence I think.

“You always feel pressure as when you have a Group One horse expectations are always high.  It is human nature to worry especially when you are trying to bag those Group Ones.

“You have to be lucky with the draw and positioning on the track. I know it hasn't been done (winning back-to-back renewals) for a good while but it would be nice if he could do that and he is good enough if everything goes right for us.

“He was the first three-year old in 19 years to win the Portland Handicap so hopefully we can put another statistic on the board.

“This is a sprint and there is no room for error and I think on paper it is a tougher race than last year, but if this horse is on song it is going to take a good one to be in front of him.”

Reflecting on last year’s Darley July Cup victory Teal was confident his emerging star had what was required to succeed at the highest level judging by his last piece of work on the gallops.

He said: “We knew he was just a frame as a three year old but as the year progressed he progressed. It was such a good performance in the Portland he had to be a Group horse in the making. We picked the July Cup as his main target as it is a top sprint race that has been won by some great horses and thankfully it came good.

“Harry (Teal) had ridden him in work five days before and he had just worked amazingly well, and Harry said to me “Don’t worry dad we will win the July Cup”, and I was like keep your feet on the floor.

“After that piece of work you thought if there is something faster than this, God Bless them. It was one of those days where everything fell into place.

“Unlike at Ascot this year where he was given a good cheer there was unfortunately no crowd for last year’s July Cup to welcome him back but we made our own atmosphere.”

Although Oxted failed to get his head in front in any of his first three appearances this year ahead of his triumph at the Royal meeting Teal never lost any faith in his stable star coming good again at the top table.

He said: “I had several conversations with the press and said he hasn’t run a dismal race this year as he had run well in defeat so we knew it was still there.

“For his run at Newmarket, we hadn’t been back long from Saudi Arabia and we had been a little bit easy on him as he lost a fair bit of weight coming back from Saudi.

“It was earlier on in the year than last year and I think he is a horse that comes to himself this time of year. Ryan (Moore) rode him for the first time and he ran to free mid race and he did too much too soon that day.

“At York he ran a solid race but he was probably drawn on the wrong side and the ground wasn’t in his favour as it was on the easy side. He is by Mayson and he doesn’t mind the cut but his best form is there to be seen and on top of the ground.

“He is a gelding so he has no stud career and we want longevity out of him. There could be another five seasons if we keep him sound.”

Integral to the emergence of Oxted has been his blossoming relationship with jockey Cieren Fallon, who has partnered him in seven of his last nine races, four of which have resulted in victory.

He added: “I think Cieren is very important to him. Cieren got beat on him the first time he rode him. He got the start wrong and we ended up badly positioned. He rode him in the Portland after that and he proved what he can do. The pair of them have gelled really well.

“Cieren rides him with a smile and he is a cheeky chap. He goes out there to have fun and there is no pressure on the horse then.”

Family is very much at the heart of Teal’s operation, and while Fallon has played an important role on the track, it is both his son Harry and wife Sue who have put in the hard work behind the scenes to help Oxted fulfil his talent.

He said: “Harry is massively important and Sue is heavily involved with the amount of hours she puts in. They get a bit of stick off me every now and again but it just works.

“It means so much more when your family is involved. It is a proud moment when you see Harry running down the track to pick him up after those big wins.

“Harry has taken over the reins from his mum in riding him at home. He knows him inside out and he tells me when he is not happy. It was his decision to miss Ascot last year, and it paid off. You need that experience when you have got quality.”

Having given up on his dream of making it as a jockey last January, Harry Teal is only too grateful to be associated with a horse of Oxted’s calibre so early in his role as assistant trainer to his father.

Harry said: “I’m really confident and just looking forward to it really. Hopefully it will be all systems go and we keep it on the right track until we get there.

“It means quite a lot as I dreamt of getting to these days in my riding career but I didn’t quite make it. Now my passion is helping dad train the winners and being a part of that.

“Riding him every day makes me feel like I’m riding a winner with Cieren. As a team and family we all want to happen.”

Ahead of Oxted taking to the track on Saturday week Teal hopes Whenthedealinsdone will already have his tally up and running at the July Festival when bidding to back up his recent success at Windsor in the Each Way Extra At bet365 Handicap on Thursday 8th July.

He said: “We made the decision to have him gelded as he wasn’t focused on what he was doing. It was so pleasing to see his performance at Windsor on a flat five as he is a six furlong horse. We’ve always held him in high regard and I’m hoping one day he can build up into a Group horse. As long as the race doesn’t come too soon I think it is a good target to aim at.”