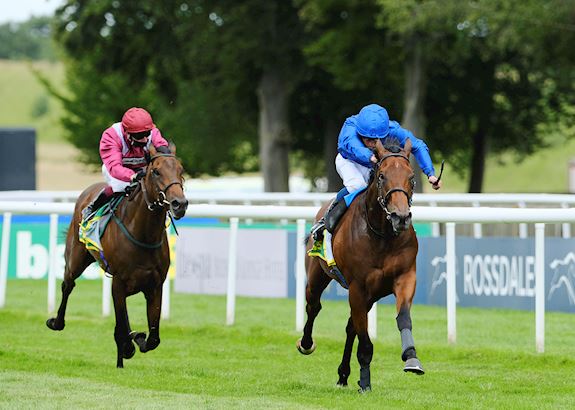 Godolphin’s Royal Fleet maintained his unbeaten record when taking the bet365 Mile Handicap in the hands of William Buick, who returned to the saddle today after an 11-day suspension incurred at Royal Ascot.

The three year old Dubawi colt was previously successful at Kempton Park and Yarmouth and despite still showing signs of inexperience by being very keen in the early stages today, powered home by half a length from Latest Generation.

Jockey Buick said afterwards: “He’s got a lot of ability and he just makes life hard for himself. We were going slow and he wanted to go left which is a bit of a habit. I didn’t have much of a choice but at least we had the rail.

“He’s done well to win. He’s possibly a horse who could get another couple of furlongs but he’s a nice horse.”

Referring to his recent 11 day ban following Royal Ascot he told ITV Racing: “I had my stag do which I’ve had time to recover from but it’s great to be back.”

Trainer Charlie Appleby is enjoying a season to remember with his three year olds, headed by Cazoo Derby winner Adayar and Hurricane Lane, winner of the Irish Derby.

Appleby said of this three year old: “He is a horse that has got a lot of raw talent there. As you saw that is what he does at home unfortunately (hang left). Some days he will jump away and he will pop into a nice rhythm and be straight as a gun barrel and other days he will lock onto that bridle and grab on to that left hand side of the bit and does what we have seen there today.

“William (Buick) was very impressed as the horse has done everything wrong and you still can’t pull him up. He is from a family we know, being out of Zibelina, and a half-brother to Royal Crusade. Royal Crusade is a strong individual as well.

“If we can put everything in the right format, he could be a good horse. You wouldn’t get away with what he has done today in a Group race. We toyed with running him in the Sir Henry Cecil Stakes (a Listed contest staged on Thursday) but the reason we came here is we felt he was off a mark which we should use, but he has also shown that tendency to do what he has shown that he wouldn’t get away with stepping up in class just yet.

“For sure we would like to look at Listed or Group race by the end of the season but it will be interesting to see what he is like at home. He will tell us as he is quite erratic at home. I don’t know why he goes left - it is just the nature of the beast as they say."

“He was lovely and settled today. He lost his way a bit earlier in the year and just wasn’t putting his head up and not going forward, but the last two races have been a massive improvement. Today even more so and he’s really getting the hang of things now.

“He’s turning into a nice horse and we’ll have a look at something similar over a mile for him next.”

Spirit Of Bermuda (12-1) looks to be a filly going places and a 6lb rise in her rating following an impressive success at Leicester last month was no barrier to victory in the Bedford Lodge Hotel & Spa Fillies’ Handicap over seven furlongs. The Twilight Son filly was prominent throughout under Tom Marquand and was not for passing inside the final furlong as she saw off all comers to win by three quarters of a length from Rising Star (33-1).

Winning trainer William Haggas said: “She loves fast ground and is a good galloping filly and she has won well today.

“I said to the owners that if she won today she would be worth having a shot at a Listed race next, so that’s what we will be doing.”

Trainer Marco Botti said of runner-up Rising Star: “She has run a really good race and the winner is probably a smart filly. It is the second time she has beaten one of ours into second as she beat Divine Magic at Leicester, but we were a bit closer this time.

“We thought our filly would be a nice three year old and at the back end of last year we took her out to Italy for a Group Two but the ground went against her as she does want top of the ground. She has only run three times on the turf. She came out of the stalls at Haydock and Andrea (Atzeni) just got a bump so she did really have a race, then she ran well at Lingfield on good ground on her next start on turf.

“I’d say we will look for something similar as at the moment she has got a decent mark. She was declared for the Sandringham at Royal Ascot then the ground went against her so she went to Pontefract a few days later and ran a solid race and has come on since. A stiff seven furlongs or a mile is fine for her.”

Meanwhile it has been a Moët & Chandon July Festival to remember for trainer Richard Hannon and he saddled his third winner of the three-day meeting when Ardbraccan (13-2) won Saturday’s opening contest, the seven-furlong Rossdales British EBF Fillies’ Maiden in the hands of Sean Levey

The two year old daughter of Lawman was making her third racecourse appearance and built on the promise of her second over the course and distance last month, taking command in the final furlong to take the honours by half a length from 11-8 favourite Calm Skies.

Trainer Hannon said: “She is a lovely filly and always has been very classy. She ran very well last time and got beaten. It looked like the Godolphin horse (Calm Skies) got to her very easily there and that we bumped into a good one.

“I’m very tempted to bring her back here for the Sweet Solera (Group Three contest over the course and distance on Saturday 7th August).  She is a lovely filly with a lot of class. She doesn’t want too much this year as she will be a lovely filly next year. I’ve also got a share in her.

“Her first run was OK but apparently the form of the race hasn’t turned out to be very good and her next run back here was a very nice run and she was just touched off. I thought she would go very close today.”