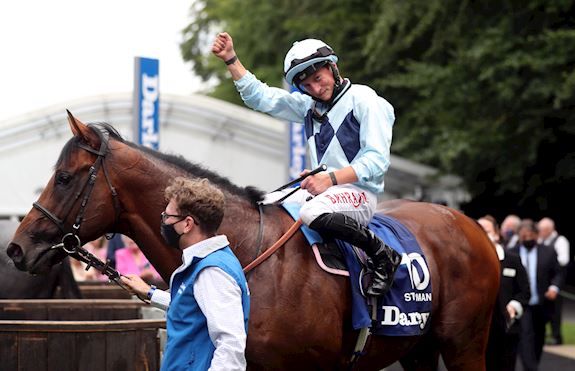 Tom Marquand celebrated his first Darley July Cup victory on Starman – then hailed the four year sprint star as “the closest thing to a racecar you can get”.

Starman was winning for the fifth time in just six career starts today and was a first Darley July Cup runner for his trainer. It was also a first ride in the prestigious six furlong contest for Marquand.

The Dutch Art colt, owned and bred by David Ward, was delivered perfectly by his rider to hit the front heading into the final half-furlong and came home a length and a quarter to the good over 7-2 favourite Dragon Symbol with last year’s winner Oxted (11-2) a further short-head away in third.

A delighted Walker said afterwards: “It is great. It has taken its time but better late than never as they say! It is a great feeling.

“I’ve believed so much in this horse and I’ve put a lot of pressure on myself and on him because the belief was there and it was great that it was vindicated.

“His only blip was on that bad ground at Ascot and we proved we made the right call there (to miss Royal Ascot). I was asked what my hopes were for him and I said I hope he wins a Group One. Hayley Moore asked ‘what are your hopes for him as a horse and where do you see him being?’ and I dreamed that he would be the sprinter of our generation, but of course you do when they are going through the grades as quickly as he was and you have to think ‘where is the ceiling?’

“Oisin (Murphy) got off him at York and said I’ve no idea how good this horse is.”

Despite the victory Walker admitted he had feared the worst at the half way point. He said: “Today he was beaten. He overcame a pretty tough trip. He wasn’t concentrating today. At York he was so professional. Today I was very negative. If you had caught me before the race I would have been very doom and gloom.

“He always looked good but you dare dream they are all champions until they prove themselves they are not. He has just never let us down.

“For the first time ever in watching him it wasn’t happening. I was feeling sorry for myself at the three (furlong) pole thinking ‘more bad luck in big races’.

“Tom was great on him. He was cool and as soon as he hit the flat and got to the bottom of the hill at the one and a half pole he just found and found. I watched down at the one pole and as they came past me I thought he has still got quite a bit of ground to make up here but he did it. I’ve not seen a replay yet so I don’t know how well he did it.”

Walker enjoyed success at Sandown Park in the Group Three five furlong Coral Charge with Came From The Dark last Saturday and admitted he will now have to keep the pair apart.

“Came From The Dark looks like a five furlong horse and this guy looks like six is the absolute minimum so I think they will avoid each other. The Sprint Cup and Maurice de Gheest are races we will look at. It is great to win a Group One here as I love Newmarket. It is great for the breeders as the Wards are legends.”

Oisin Murphy, rider of runner-up Dragon Symbol, said: “He’s a very good horse and I’m thrilled for Ed Walker. I was given the choice and I picked the wrong one but I’m thrilled for their team and they’re having a fantastic season.

“I hope Dragon Symbol will get his day. We could well look to France next potentially for the Prix Maurice de Gheest.”

Roger Teal, trainer of third-placed Oxted, commented: "He's run a cracking race. Starman missing Royal Ascot has probably been in his favour as we did that last year and he came here a fresher horse than us, but fair play to Ed Walker.

“I'm delighted with him, he's run another brave race and you can't be disappointed at all. We knew the better horses were all drawn low and it was a bit of a kick in the teeth when the draw came out on Thursday. But it has been encouraging that the winners have been coming from right across the track here this week so we have no excuses.

“I've got him in the Haydock Sprint Cup so that would be an option but we'll see how he comes out of this first. Beyond that there is the Prix L'Abbaye at Longchamp, which could suit him back at five.

Silvestre De Sousa, who partnered fourth-placed Art Power, said: “He’s run a great race. He’s a good horse and he will have his day.”

Hollie Doyle was sixth today aboard Glen Shiel and thought the ground did not play to the strengths of the seven year old.

She said: “He’s run a massive race and has not been beaten far at all. He went on the ground but he didn’t feel at home on it as well as he does on softer ground and we know he’s going to get his head back in front in a Group One towards the back end of the year, so it’s great.”