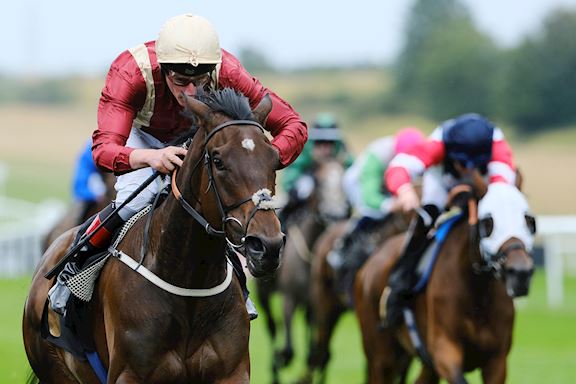 Five things we learned at Newmarket on Friday 27th August

It’s hard to believe it’s that time of the year already when racing finishes at Newmarket’s July Course and the baton is handed to our neighbouring track, the Rowley Mile.

Flat racing HQ’s summer home staged its penultimate fixture on Friday 27th August and the seven race card provided not only some highly competitive racing but also plenty of clues for the months ahead and even next season.

There are few things which excite a Flat racing fan more than seeing a two year old with an electric turn of foot destroy the opposition.

So those paying close attention to the opening race of the day will have been thrilled to see Silk Romance do just that.

Leading from the front the 4-6 favourite was never headed throughout the seven furlong contest and when jockey William Buick asked for a little more two furlongs from home he got a LOT back in return.

The performance was so impressive it prompted Ladbrokes to immediately slash her odds for next year’s QIPCO 1000 Guineas on Newmarket’s Rowley Mile to 25-1.

Speaking after the five and a half length victory, winning trainer Charlie Appleby said: “I was pleased with the performance there and she has naturally come forward for that first run at Kempton.

“Talking to William (Buick) he was very pleased with the performance and he felt she is ready to step up to black type company.”

Stellar Queen with Hollie Doyle on board outran her odds of 16-1 to finish second, while Oheka and Richard Kingscote made significant headway inside the final strides to snatch third place by a head from Thakrah in fourth.

If Silk Romance’s taking victory in the fillies’ novice contest was a warning to her two year old rivals then Razzle Dazzle did his very best to make the novice colts sit up and take notice too.

Richard Hannon’s charge had been impressive when finishing second here at the July Course three weeks ago and he had no trouble in going one better to secure victory by five and a half lengths.

Jockey Andrea Atzeni let the 10-11 favourite take up the race from the outset and, in similar style to Silk Romance, was never really troubled at the front end throughout the seven furlongs.

The winner holds Group Two entries in the Champagne Stakes and Royal Lodge, and a Group One entry in the Darley Dewhurst Stakes. Hannon, speaking away from the track, said: “He is a lovely big colt and I thought he would run well first time and he duly did and he would have improved for that.

“He shaped with lots of promise first time and he was still making up ground going to the line. I was even more pleased today as he jumped out and was not keen and he looked a very good horse out there in front.

“Let’s see how he comes out of the race but he is in all the big races as he has entries in the Champagne Stakes, Royal Lodge and Dewhurst Stakes, but we will talk to Sheikh Obaid and decide what to do.

“It is all about next year with him and it is not about getting it while you can as he is a long term project.”

Hugo Palmer’s Unilateralism finished second, with Peace Negotiation a 28-1 third for Charlie Hills and Richard Kingscote. The well-bred Tangled Words, who had been backed in to 10-3, was fourth.

FRANKEL FOAL IS JUST FAB FOR BECKETT AND RYAN

Fabilis picked the perfect moment to open his account for the season - before going under the hammer at next month’s Tattersalls Horses In Training Sale.

The Ralph Beckett-trained Frankel colt, who finished ninth in the Italian Derby at Capanelle back in May, demonstrated that stamina is his forte in the MansionBet Beaten By A Head Handicap.

Making the most of his three year old allowance, he and jockey Rossa Ryan enjoyed a length and three quarter victory in the 1m 4f feature race of the day.

Finding plenty when called on for his maximum effort, the 5-4 favourite stayed on in game fashion on the climb to the line, leaving top weight Global Heat and Tyson Fury back in second and third respectively.

Jockey Ryan said: “Ralph seemed pretty confident with him with the three year old allowance that he had today. I just had a slight scare two and a half out and I had to really shake him up before he got into gear.

“A mile and a half is fine but he would stay a mile six I’d say, as he settles and relaxes well. When he gets a good strong gallop he is really happy.

“He is in the sales next month and he will do well for whoever gets him as he is a good little horse.”

He might have started the day tweeting about being stuck in a Friday morning traffic jam, but Jim Crowley was all smiles after Tasfeeq produced the goods to score in the MansionBet Best Odds Guaranteed Handicap Stakes.

The rider posted a picture of a gridlocked M25 at 9.45am with the caption: “This is why jockeys don’t want to do two meetings a day any more!!!!” But fast forward little more than five hours and he was celebrating victory on Marcus Tregoning’s 4-1 chance.

Racing alone on the far side for most of the one mile contest, the pair joined the rest of the pack with two furlongs remaining and kicked on in determined fashion to win by a length and a half.

“Today Jim just put his hands on his shoulders and let him use his stride and it is a great place to do that here. It is nice to see him get his head back in front.”

The hat-trick-seeking Cosmos Raj was in second, a further length and a quarter clear of the 7-2 favourite Zagato in third.

VANITAS VICTORY IS WORTH THE WAIT FOR WATSON

There are few sports in which competitors ‘lose’ quite as often as they do in horseracing.

It doesn’t matter whether you’re Ryan Moore, Frankie Dettori or a young apprentice with only a handful of rides under your belt – the truth is you’ll ride more losers in your career than you will winners. Many, many more in fact.

Having been crown Champion Apprentice Jockey in 2018, Jason Watson – still only 21 years of age - is one of the sport’s brightest young talents. However, before this fixture his record of just one winner in his last 33 rides would have put off even the most optimistic of punters.

So it will have come as some relief to the Brighton-born rider when the David O’Meara-trained Vanitas produced one of the toughest and most determined performances of the day to land the MansionBet Bet £10 Get £20 Fillies’ Handicap.

Heptathlete and Daniel Muscutt put up a valiant fight, but it was 5-1 chance Vanitas who took over proceedings with just over a furlong of the contest remaining and after a relentless battle to the line secured victory by a neck.

Since leaving his role as stable jockey to Roger Charlton earlier in the season, Watson has enjoyed plenty of success with O’Meara, and the jockey said: “We are having a good time of it. It is part of the new chapter for me. He has been a great supporter of mine lately and long may it last.”

Of the 5-1 winner he added: “Her last couple of runs might be a bit disappointing but the pace has been a bit strong and she has not had the chance to properly race. Today they went a nice sensible gallop and she stuck at it well.”