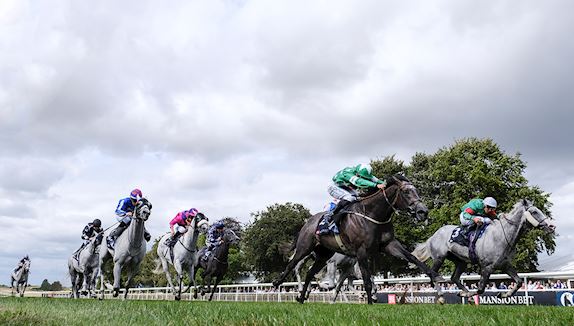 One of the most unique races in the calendar, the MansionBet Beaten By A Head Grey Horse Handicap, went to 5-2 favourite Mitrosonfire at Newmarket this afternoon (Saturday 14th August).

Staged over six furlongs, the contest is restricted to horses officially registered as grey and is the only race of its kind in Great Britain. All grey thoroughbred horses can trace their ancestry back to 18th century stallion Alcock’s Arabian and constitute around three per cent of the current racehorse population, making today’s sprint up the July Course a rare and remarkable sight.

Mitrosonfire was making a quick reappearance after winning at last Saturday’s Shergar Cup fixture at Ascot. Owned by John O’Mulloy and trained by William Muir and Chris Grassick, the three year old son of Lethal Force was always prominent and took the lead approaching the final furlong. Despite facing a strong challenge from Wentworth Falls close home, Mitrosonfire had enough reserves to hold on by a head under talented apprentice Stefano Cherchi.

Today was the fourth success of 2021 for Mitrosonfire, following his success at Ascot last week and at Ripon and Pontefract in June.

Cherchi said: “He is such a genuine horse and Mr Muir filled me up with plenty of confidence before the race. He travelled very strongly through the race and picked up nicely towards the end. He is such a game horse and has now won four races in a very short time. He only won last week at Ascot and you could have thought maybe he would be a bit flat but he wasn’t’ – he was spot on.

“I had one ride for the stable last year but this was my first for them this year. My plan is to make contacts and ride for as many different trainers as I can. I have plenty of support from some very nice people and my aim is to please them. I have a very good boss in Amy Murphy, who helps me so much and is very good to me.

“My aim is to keep riding winners this season and go into the winter and next season with my 3lbs claims. Hopefully, I will have another good year but you never with this game, it can be so up and down. I’ll just keep my head down, work hard and hope for a bit of luck.”

Referring to the uniqueness of today’s contest, Cherchi concluded: “When you get down to the start, it’s rare to see more one grey horse so today’s race catches your eye. People wait and target grey horses at this race so it’s nice to win it.”