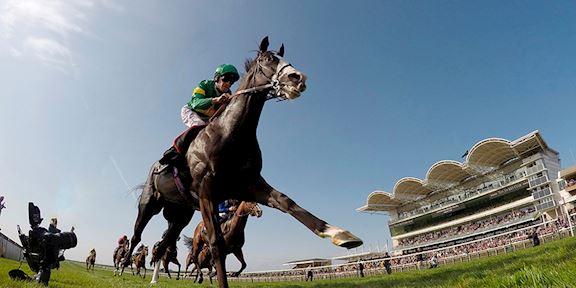 Joseph Parr is looking forward to running Yagood in the Close Brothers Cesarewitch Trial at Newmarket tomorrow (Saturday 18th September) and admits victory in the feature race would “without a shadow of a doubt” be the biggest winner of his career.

It has already been a memorable campaign for the Teofilo gelding, who has claimed victory in four of his nine previous starts for the second-season Newmarket trainer since joining him from the Roger Ingram yard in March.

Although Parr recognises that Yagood faces a tall order in the two and a quarter mile stamina test, he believes the five year old is more than capable of putting up a good show under Jimmy Quinn from the foot of the weights with conditions set to be in his favour.

Parr explained: “He is running from seven pounds out of the handicap so it is a massive task ahead of him. He has already won four times this year so his job is done.

“He will have his optimum conditions and he will stay all day. By the time the race starts the ground is likely to be no softer than good, which will be perfect for him.

“He has got no weight on his back and he might just run well. If he does run well then happy days but if he doesn’t we will go back to the drawing board and run him at his own grade where I’m sure he can win again.

“Without a shadow of a doubt this would be my biggest winner but I’m hopeful rather than confident.”

Bin Suroor said: “He has been doing good and he came back well from his last run. This year he has really improved. He worked well on Wednesday.

“He is in good form and we are looking forward to running him. This race wasn’t run to suit him last time but we go again as he is doing well.

“He has won over an extended two miles this year so the trip won’t be a problem. We have decided to put the cheekpieces on to change things up and see how he goes in them.

“We will see how he runs on Saturday before making a plan. I would say he is more likely to be a horse that goes back to Dubai to run in those staying races but we will see.”

Having saddled Stars Over The Sea to glory in the race in 2018 trainer Ian Williams believes Mancini will be “there or thereabouts” after filling the runner’s-up spot at Chester on his most recent outing.

Williams said: “Mancini has been running well in defeat and is in great form. He should enjoy the track and the trip.

“We haven’t got too much to play with off his current handicap mark. He will be there or thereabouts but he will probably find one to good at the weights.

“He ran well at Chester on a track that wouldn’t have suited him as he prefers a galloping track to a twisting turning one. He has had some very tough assignments this summer but he has done us proud and it would be nice if he could get his head in front.”

The Alvechurch handler will also be represented by dual purpose performer Ernesto, who will bid to stage a revival under five pound claimer Mollie Phillips, having failed to beat a rival on either of his two Flat starts this year.

He said: “He has had a good summer over hurdles but has not been so great on the Flat. He is falling down the weights and he is down another five pounds for his last start. He has another five pounds off his back with young Mollie Phillips on board.

“He will be running off a nice weight and if he shows half of the ability he has he could go well. Nothing has come to light why he has run like he has on the flat recently but he is making himself better handicapped.”

Meanwhile Ross Birkett hopes Balgair can be the “steering job” he was 12 months ago when the pair attempt to secure back-to-back victories in the Close Brothers Invoice Finance Amateur Jockeys’ Cambridgeshire Handicap.

Last season’s Amateur Gentleman Jockeys Flat Champion will take on 12 rivals as he attempts to replicate his six length victory aboard the Tom Clover-trained gelding in last year’s renewal of the nine furlong prize.

Balgair has failed to score in four subsequent outings but Birkett, who between 2014 and 2018 held the Guinness world record for running the fastest marathon dressed as a jockey, is confident the pair can strike gold together again.

He said: “It’s probably my fault that he hasn’t won since last year’s race as he won so easily. He then ran in the proper Cambridgeshire the next week but the ground went against him.

“He was a bit disappointing last time but Tom has freshened him up and is really happy with him. He is back down to 80 which is the same mark he won off last year and if he is in the same fettle as last year he should be a steering job.

“He does need the ground to dry out a bit but it should do. The more runners there are the better as he likes a good pace to chase at. This is the ideal race for him as this is his trip and he needs a straight course.”

Though the 32 year old will slip into his silks at the weekend, he will be dividing his time even further in the future after recently taking on the role of jockey's agent alongside his position as assistant trainer to his mum Julia Feilden.

He said: “I’ve become an agent really to help my cousin Sam Feilden get going as he has become an apprentice while I’ve also taken Emma Taff on who is a seven pound claimer based with Tony Carroll.

“The aim is just to get these two going as I’m still assistant to my mum, which is my first priority, but I like keeping busy and it will be good to help these two get rides and further their careers.”