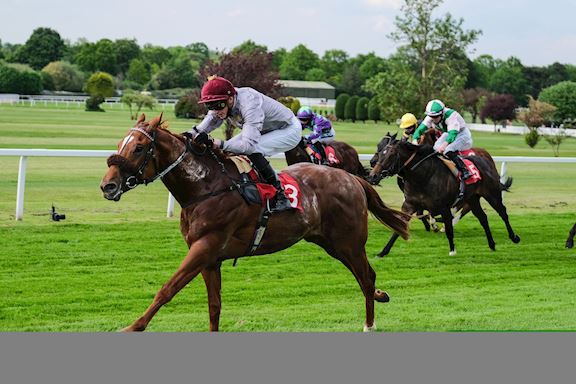 The Al Shaqab Racing-owned colt will bid to double his own Group One tally in the six furlong event at the Rowley Mile on Saturday 25th September - five years after his sire Galileo Gold provided Palmer with his first Classic success in the QIPCO 2000 Guineas.

After suffering Group Two defeats in the Coventry Stakes at Royal Ascot, the Tattersalls July Stakes at Newmarket and the Richmond Stakes at Goodwood, Ebro River took his form to new levels when making a winning Group One debut in the Phoenix Stakes last time out at the Curragh on August 8th.

Though Ebro River holds a multitude of Group race entries, Newmarket trainer Palmer has his sights set on making his latest stable star’s next target the Juddmonte Middle Park Stakes on the final day of the Cambridgeshire Meeting.

“He is very unlikely to go to the National Stakes and the Jean Luc Lagardere is a possibility, but I think six furlongs is his trip.

“The Middle Park is the main aim and that is where we want to go but we have kept the other options just in case.”

Palmer believes the main reason Ebro River scored for the first time since tasting Listed glory in the National Stakes at Sandown Park back in May was the ride he received from Shane Foley.

He added: “It was great for the horse to get his head back in front. He was the most exposed from one point of view but he was also the most experienced from another. He had to find something extra and thank goodness he did.

“I think he benefited from a fabulous ride. The ride Shane gave him was the one he and I discussed going into the race and it went to plan.

“We had tried riding the horse from behind but that is not his game and he was a bit awkward in being beaten in those three Group Twos.

“He did really well to win and I hope that allowing him to stride on and race more prominently is difference and that we continue to see improvement.”

Galileo Gold excelled over a mile after following up his 2000 Guineas success later that year in the St James’s Palace Stakes at Royal Ascot, but Palmer feels that Ebro River is very much an out-and-out sprinter.

He said: “He is a big horse and he weighs more than his dad did at three. He is very much a three year old and no one wants to wish life away but I’m looking forward to campaigning him as a three year old next year.

“In my mind he is a sprinter but if he was to start getting beaten and it looks like he needed to go seven then he could be a Lennox, Minstrel and Foret horse.

“Everything on his page suggests he is a fast horse and the animal does as well.”