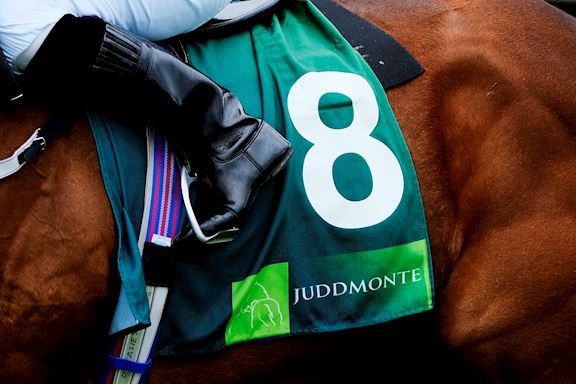 Ger Lyons believes the unbeaten Sacred Bridge has the “wow factor” ahead of this Saturday’s (September 25th) Group One Juddmonte Cheveley Park Stakes.

Lyons, who is based in County Meath, is no stranger to success in the six-furlong contest, having saddled Lightening Pearl – his first Group One winner - to glory a decade ago.

Homebred by Juddmonte, two year old Bated Breath filly Sacred Bridge began her career with success in a Naas maiden on June 23rd, following up with victory in the Listed Tipperary Stakes a week later. She then saw off 21 rivals to land the Ballyhane Stakes, a median auction race, back at Naas in early August which was followed by a first Pattern race triumph in the Group Three Round Tower Stakes at the Curragh on August 27th.

While all four of her successes have come over six furlongs, Lyons revealed today that it was not until her most recent victory that he thought Sacred Bridge was something out of the ordinary.

“Sacred Bridge has just rocked up at the races. I never went to the races with her cocky that I was going to win. She went to her maiden with the usual rules of we’ll see how she performs, hopefully she will improve for the experience and we’ll see where it goes. The only time I got a wow off her was the last day. She saw out the tough Ballyhane race well but was I thinking ‘is she is a Group One filly?’ No.

“She is honest but I was always expecting something to beat her, but the last day I got a wow off her and thought, ‘OK, you deserve your place at the top table and let’s see how that plays out’. In the Round Tower, I thought the way she did it in Group company was visually spectacular and it was also fast ground which I think is the key to her. We are asking a huge question of her on Saturday, but I don’t think she is going to be out of her depth.”

Lyons admits this Saturday’s race will be his star filly’s “sternest test” but insists that is based on it being a Group One contest rather than who her rivals may be.

He explained: “I see she is 2-1 favourite for the Cheveley Park. She has rocked up four times and won four times, so we can’t knock our filly. I wouldn’t change her for anything.

“I haven’t got a clue what else is running – I never do! What other trainers are doing is their business and my job is to get this filly there on Saturday in good health and if she rocks up and does what she has been doing all summer then happy days.

“This is her sternest test as she is stepping up into the big league at Group One level. I’m not being negative, but invariably you fail when you step up to this level. She hasn’t let me down yet though and we live in hope.”

Looking ahead to next year, Lyons believes Sacred Bridge has the option of stepping up to a mile or remaining at sprint distances.

He continued: “I trained her sister Viadera, who is now doing very well in America. Sacred Bridge is bred to get a mile and at home just goes through the motions and doesn’t show you ow precocious she is. I would like to think she will get a mile but when they are winning over this trip why change it? We will change it when we need to change it.

“We will learn more on Saturday and she will go into the winter with an entry in the Guineas and we will have also races like the Commonwealth Cup in mind. You can ride her how you want, so her attitude and temperament should help her get the trip. It’s a lovely high-class problem to have!”

Reflecting on Lightening Pearl’s success a decade ago, Lyons reflected: “It’s all a bit of a blur. I don’t like going racing too much as you are pulled from Billy to Jack and I get more done at home. I remember I missed all the photographs afterwards and there was a lot of nervous energy.

“In my head, I always thought I was going to be training Group One winners from the start and couldn’t understand why it was taking so long! When it happened, I wasn’t getting too excited as it had taken so long. These kind of races are why we do it. The Cheveley Park has been good to me and I’d like to win it again. As I’ve learned, Group One horses are few and far between so when you get them, you cherish them.

“I like to be competitive and while we don’t run many, our strike rate is good. It’s an expensive game when you travel so when I send horses over I want to be involved. It’s not that we are afraid to lose but as long as they are competitive and run their race then fantastic – I’ll take that every day of the week. I don’t want to come home scratching my head. The two horses I am sending to Newmarket on Saturday are in the right races and are going to be competitive. They are two nice horses to be going to war with.”

The trainer was also keen to pay tribute to Sacred Bridge’s owner-breeder Juddmonte, the hugely-successful operation founded by the late Prince Khalid Abdullah.

He commented: “It’s a dream come true (to train for Juddmonte). I can’t overstate the connection that an outfit like Juddmonte walking into an establishment like mine does for my business. It’s a huge pat on the back for Glenburnie Stables that they entrust us with their horses.

“The horses they send us literally could be anything. It’s like when you were young waking up on Christmas morning, wondering what was inside the parcel. Obviously they have their share of ordinary horses but when these horses turn up, you have a chance that what you are getting will enable you to compete at the top table.

“I take it as a huge personal compliment that they joined my outfit and it’s something I am very proud of.”

The other runner at Newmarket on Saturday for the Lyons team is the Peter Brandt-owned Dr Zempf. A son of Dark Angel, Dr Zempf won on debut at the Curragh in June before taking fourth in the Group Three Railway Stakes back at the same venue later the same month. His most recent outing saw him finish runner-up in the Group One Phoenix Stakes, again over six furlongs at the Curragh, behind Ebro River on August 8th.

Lyons said: “Dr Zempf goes for the Middle Park. He is a lovely colt and we liked him from day one. He’s definitely our Guineas horse for next year.

“I would much rather be going over seven furlongs with him but we are erring on the side of weakness at the moment. Colin (Keane, jockey) has always said ‘stick to six (furlongs) with him for the moment’. I think it is the six furlongs that has been getting him beat up to now. Colin said he would reverse the form of the Railway Stakes and he was right but then we bumped into one in the Phoenix.

“He is still in the Dewhurst and I would love to have gone the National/Dewhurst route with him but Colin has always felt he is still on the weak side so we’ll stay at six for the moment but I can’t wait to step him up in trip next year.

“Realistically, it was going to be the Middle Park or the Dewhurst for Dr Zempf but there is a little bit of time between the two races. We’ll get Saturday out of the way first before we put a line through the Dewhurst. Aidan (O’Brien) ran one in both recently and the horse will have all winter to get over it but we’ll see what happens on Saturday first.”

Another possible starter at the Cambridgeshire Meeting for Lyons is Juncture, who holds an entry in the seven-furlong Group Two Rockfel Stakes (Friday 24th September). Another Juddmonte home-bred, the two year old Dark Angel filly was last seen taking second place in the Group Three Silver Flash Stakes at Leopardstown in July.

Lyons said: “Juncture is also entered at Curragh on Sunday. We’ll look at both races and study the weather forecast and she’ll go where we think she can win.

“There is a chance she will go for the Rockfel, but my first preference would be to stay at home for the Group Three Charlie Weld Stakes on Sunday if everything fits right.”

Summarising his season so far, Lyons revealed that his two year olds have been the stars of his stable.

He summarised: “I have a wall where I put up pictures of our winners through the year from the first to the last winner. At the start of the year, it is blank which keeps me on my toes. I said to the owners, we are going to win our races but are going to be down on prize money and I don’t think we have any big horses unless the two year olds are exceptional.

“At that moment, we didn’t know but the two year old have been exceptional and are doing their job. Our number of winners is up there with the best we have ever had and we are on the borderline on breaking two million in prize money.

“We went into Champions Weekend neck and neck with Jessie Harrington for third place and she absolutely wiped the floor with us, so she put me back in my box.”