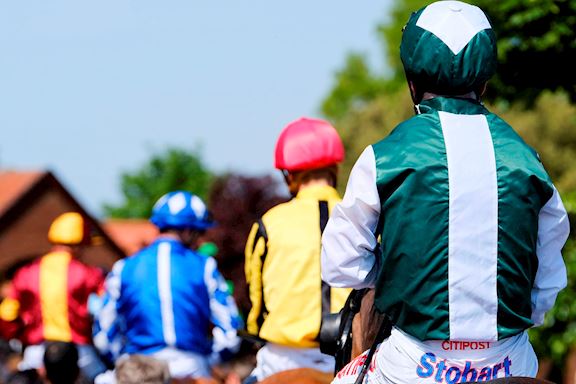 The three-day Cambridgeshire Meeting began on Thursday 23rd September on the Rowley Mile at Newmarket.

Modern Games carried the famous blue silks of Godolphin to success in the feature Group Three Tattersalls Stakes and could now possibly head Stateside for the Breeders’ Cup in early November. Nayef Road gained a deserved success in the Listed Jockey Club Rose Bowl Stakes while apprentice jockey Adam Farragher was over the moon with his first Rowley Mile victory.

Charlie Appleby heaped plenty of praise on jockey William Buick for the “great ride” he gave Modern Games, who took a step up to Group race company in his stride in the Tattersalls Stakes.

It was a case of as you were as the Group Three feature race remained in the clutches of Appleby and Buick for the second year running after the two year old son of Dubawi followed up stablemate La Barrosa’s victory in the race 12 months ago.

After making a swift exit from the stalls, Modern Games raced at the front of three pairs spread across the track where he was soon followed by eventual runner-up and Evens favourite, Trident, from the Andre Fabre yard.

As the pace began to quicken up front Modern Games soon had a number of his rivals playing catch-up inside the two furlong pole, including Trident.

Finding plenty out in front, the 3-1 chance went on again inside the final furlong before crossing the line two and a half lengths clear of Trident, with the four-timer-seeking Harrow a further length and a quarter adrift in third.

Appleby said: “Full credit to everyone at home. Lorna, one of the girls that rides him, said this morning that it will have to be a good one to beat him.

“He did a bit of work on Saturday and he worked particularly well. Going out there today it was a great ride by William. It was always our plan to make it and get them to come at us and it paid off.

“I wouldn’t pitch him in as a Dewhurst horse just on the back of having Native Trail there and if you put the two at home there wouldn’t be much of a competition really. He is going to be a nice, solid horse for next year.”

Regarding future plans Appleby hinted that Modern Games could join stablemate Albahr in in the Breeders’ Cup Juvenile Turf at Del Mar on November 5th, for which he was introduced at 6-1 for by Paddy Power.

The trainer added: “He is a neat little horse and something like the Breeders’ Cup we might look at. He has got plenty of experience under his belt now.

“If we go again this year something like the Breeders’ Cup he could just take a bit of race nous with him.

“We have got Albahr in there who is a slightly different profile to him but they are two hard-knocking sons of Dubawi and A, they won’t look out of place and B, we will run alright over there.”

Assistant trainer Charlie Johnston watched Nayef Road get back to winning ways with an emphatic victory in the Jockey Club Rose Bowl Stakes – then admitted it was the result of waiting patiently to avoid a clash with Stradivarius.

Making his first start outside of Group race company since July 2019, the five year old son of Galileo, who is owned by Mohamed Obaida, made the most of a drop in class to make every yard a winning one and give trainer Mark Johnston his first victory in the Listed contest.

Although Roberto Escobarr emerged from the chasing pack he could never get on terms with the 9-2 winner, who bounded on relentlessly to claim victory by six lengths and complete an 81.5-1 double on the card for winning jockey Andrea Atzeni, following the success of Subastar in the opening race.

Charlie Johnston, son and assistant trainer, said: “When we saw this race we thought it was a good opportunity to get his head in front in slightly calmer waters. He proved he has still got the ability that has seen him come second in two Group Ones.

“We didn’t go to York as when Stradivarius was going there we thought he wouldn’t go to Doncaster as well, but fair play to him he has kept turning up and dancing every dance this year. It was nice to find a race where he wasn’t there.

A return to Group Two level for the QIPCO British Champions Long Distance Cup, for which he has now been trimmed from 25-1 into 10-1 by Paddy Power, could be an immediate target for Nayef Road, while next year’s Dubai Gold Cup at Meydan may be a long term target.

Johnston added: “He is in at Ascot. We will speak to the owners to discuss what the plans are longer term for the winter and next year.

“Albeit he finished second in a Gold Cup on soft ground, I think he is better on top of the ground. It will depend a bit on conditions at Ascot.

“You are stuck between a rock and a hard place as if the ground is quick Stradivarius is an impenetrable wall and if it is soft you get Trueshan in his best conditions.

“He is a horse that can be competitive in these races. Dropped back to this level he is better than these.

“I wouldn’t rule Dubai out given his connections. Sometimes the Dubai Gold Cup is a race that can cut up. He was on the plane to go there two years ago when coronavirus first hit and the meeting was abandoned.”

Jockey Adam Farragher admitted it felt “pretty nice” to taste victory on the hallowed turf of the Rowley Mile for the first time aboard Gale Force Maya, who made it third time lucky in the British Stallion Studs EBF Premier Fillies’ Handicap.

The 5lb claimer continued his hot streak in the saddle after the Michael Dods-trained mare followed up her recent success at Pontefract to go two places better in the six-furlong prize than last year, having previously filled the runner-up spot in the 2019 renewal.

Although pressed hard late on by eventual runner-up Gellhorn, the line came in time for the daughter of Gale Force Ten and she prevailed by a neck at odds of 9-2.

Farragher, who celebrated a double at Goodwood on Wednesday, said: “I’m delighted with the way things are going. Mr Haggas has been very good to put me up on some nice horses and to be seen riding for him has got me lovely outside rides like this one today.

“I knew I had to commit a little bit early as she was keen and I didn’t want to disappoint her.

“Speaking to a couple of the senior jockeys if you can get your momentum going down the hill it will slingshot you up the hill the far side and it worked out today.

“I committed a bit early but she is very tough. I could hear the other horse coming to me but I could feel her underneath me and she was looking for the line more than they were.

“She has been a bit unlucky but things are falling right for her now. She is in a good place now and when they are in that you don’t know how far they will keep improving. To ride a winner here on hallowed ground is pretty nice.”

Trainer Roger Charlton will consider returning Boltaway to Newmarket in just over two weeks’ time for an outing in the bet365 Old Rowley Cup after the Dubawi colt returned to winning ways in the Discover Newmarket Handicap.

Having come unstuck in his bid for a four-timer in a tactical affair at Pontefract last time out, the homebred Juddmonte three year old regained the winning thread in the mile and prize when showing stamina is very much his forte.

Finishing to good effect close to the stands’ side rail, the 2-1 favourite was well in command come the finish line to pass the post two and three-quarter lengths clear of runner up Lexington Knight.

Charlton said: “He is back on song. He probably doesn’t want the ground any quicker but we can’t complain.

“The race at Pontefract was an odd race. The outsider got a soft lead and they ended up being strung out all over the countryside.

“We will now think about the Old Rowley Cup. I think he will make a very nice horse to buy in the horses in training sale as he is a very sound tough horse.

“The more racing he has had the better he has got.”

Ralph Beckett watched on with delight as his long term plan for Rhebus Road came together in the Newmarket Challenge Whip Handicap.

Purchased for 70,000 guineas at this year’s July Tattersalls Horses In Training sale, the Champs Elysees gelding won the mile prize he was brought for before embarking on a Jump racing career with Oliver Sherwood.

Sticking close to stands side rail the 8-1 chance demonstrated a tenacious attitude under Jane Elliot to defeat 5-2 favourite Babindi by half a length in the historic 10-furlong contest.

Beckett said: “He was brought to do this job at the July Sales and he has done what he was brought for and now goes to Oliver Sherwood jumping.

“Jane Elliott was apprentice to me ages ago and she had her first rides for us. It is great for her to ride a winner for us as it has been a while.

“I’ve won the race before for Peter Savill, and I’ve also won for David Oldrey with a horse called Vamp.

“The dinner for 12 we get as a prize at the Jockey Club Rooms will get well used.”