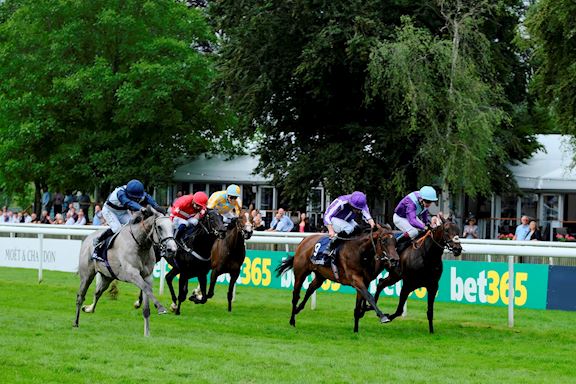 Trainer Richard Hannon believes Snow Lantern has a “golden opportunity” to follow in the hoofprints of her mother Sky Lantern and secure the second Group One of her career in the Kingdom of Bahrain Sun Chariot Stakes at Newmarket on Saturday (2nd October).

The three year old daughter of Frankel features among 17 remaining entries for the mile feature which her dam Sky Lantern, trained by Richard Hannon Senior, comfortably captured in 2013.

After making a winning return at Newbury in April, the Rockcliffe Stud’s homebred filly then suffered back-to-back defeats in a Listed contest at York and when finding only Alcohol Free too strong in the Group One Coronation Stakes at Royal Ascot.

Snow Lantern exacted revenge on Alcohol Free when opening her account at Group One level in the Tattersalls Falmouth Stakes at the Moët & Chandon July Festival at Newmarket ahead of finishing third behind her old adversary in the Group One Sussex Stakes at Glorious Goodwood.

Following her latest reversal when fourth behind Baaeed in the Group One Prix Du Moulin at Paris-Longchamp on 5th September, it was later discovered that Snow Lantern had produced a dirty scope. However Hannon reports his star filly to be back firing on all cylinders.

Hannon said: “Snow Lantern is in good nick. She didn’t scope very well after France but she has had the antibiotics since then and she has scoped fine.

“The count they take wasn’t right. Her neutrophils were way too high at 82 and now they are two so she is over whatever she had and ready to go again.

“She did a bit of work yesterday morning and will now be turning up in the Sun Chariot on Saturday. She will run a lot better than she did in France.

“She always works terrible so I’m not working her to look at how good she is I’m working her to get fit and get her going again. Sean (Levey, jockey) is happy with her.

“This is a golden opportunity against her own sex and hopefully she has an outstanding chance.”

Although Snow Lantern is yet to race on the Rowley Mile the Classic-winning trainer believes it will play to her strengths.

He added: “She has beaten a lot of them, if not all of them before. I think the straight track will suit her and we can ride her however we want.

“She hasn’t got to cope with a bend. If she takes a pull, Sean said he might just let her roll and use her a little bit.

“Hopefully she can come back and redeem herself her. After that we might think about the Champion Stakes or the Queen Elizabeth II Stakes on Champions Day.

Charlie Appleby’s chances of securing the mile prize for the first time in his career rest with Althiqa, who has secured back-to-back Grade One wins in America on her last two starts after following up her victory in the Just A Game Stakes at Belmont Park in the Diana Stakes at Saratoga.

This year’s QIPCO 1000 Guineas runner-up Saffron Beach remains on course for a return to the top table after the Jane Chapple-Hyam-trained filly bounced back to winning ways in the Group Three Atalanta Stakes at Sandown Park last time out.

Ivan Furtado has left in Just Beautiful, who claimed Group Three glory in the Sceptre Stakes at Doncaster, while the Amanda Perrett-trained Lavender’s Blue, owned and bred by Benny Andersson of ABBA fame, could bid to follow up her Group Two success in the Celebration Mile at Goodwood.

The remaining three Irish entries are Champers Elysees from the yard of Johnny Murtagh, last year’s Group One Moyglare Stud Stakes heroine Shale, who is the representative of Donnacha O’Brien and the Willie McCreery-trained Epona Plays.

The Kingdom of Bahrain Sun Chariot Stakes – Facts & Figures (Since 2000)

The Sun Chariot Stakes was established in 1966 and commemorates the outstanding filly Sun Chariot. Bred by The National Stud and owned by King George VI, Sun Chariot won the Fillies’ Triple Crown (1000 Guineas, Oaks and St Leger) in 1942. Due to World War II, all of her Classic victories came on the July Course at Newmarket. She was trained by Fred Darling and partnered by Sir Gordon Richards for all her Classic triumphs.

Initially the Sun Chariot Stakes was a Group Two race staged over 10 furlongs and restricted to three year old fillies. It was opened up to older fillies and mares in 1974 and was reduced in distance to a mile in 2000. In 2004 it was upgraded to Group One status and currently forms part of the QIPCO British Champions Series.