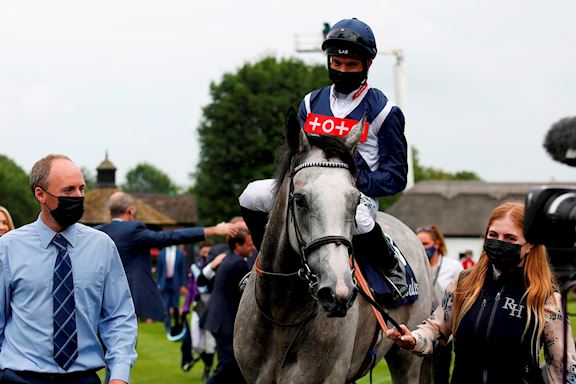 The Group One Kingdom of Bahrain Sun Chariot Stakes takes centre stage at Newmarket on Saturday (October 2nd) and a total of 13 declarations were received today for the mile contest for fillies and mares, which forms part of the QIPCO British Champions Series.

One of the 13 runners is Snow Lantern. The three year old Frankel filly, trained by Richard Hannon and partnered by Sean Levey, has already tasted Group One glory at Newmarket in 2021 having taken the Group One Tattersalls Falmouth Stakes at the Moët & Chandon July Festival.

Snow Lantern will be bidding to emulate her dam Sky Lantern, who recorded a length success over Integral in the 2013 renewal of the Kingdom of Bahrain Sun Chariot Stakes.

Sophie Woolf, manager of Rockcliffe Stud, the owner-breeder of Snow Lantern, said: “It’s just amazing – breeding a Group One winner from a Group One winner who brought us so much joy, gave us so many memories and so many amazing days. To be able to carry on the family and be part of it is priceless.

“Sky Lantern was a brilliant racemare. She was very tough and won some fantastic races. She won a Group One at two with the Moyglare and as a three year old she obviously won the 1000 Guineas, Coronation Stakes and Sun Chariot Stakes. She was also second in the Falmouth Stakes, slightly controversially, but we have set the record straight with Snow Lantern.

“As a broodmare, Sky Lantern is relatively straightforward. She has her moments but I think she was a bit like that in training. She is good to handle and is a very good mother who deals with her foals very nicely. She is very easy to foal and is a really nice individual to have around.”

Looking back to the birth of Snow Lantern on March 1st 2018 Woolf commented: “It was minus 10 in the barn the night that she foaled. When we woke up the next day everything was white with about two inches of snow courtesy of ‘The Beast From The East’ and that is how her name came about.

“Snow Lantern is her (Sky Lantern’s) first filly and obviously is in a different league to her two colts. She just had something about her and took life on from day one. She was always ready for what you asked her to do next and was always athletic. I can’t tell you how much like her mother she is – her mannerisms are so alike.”

Reflecting on Snow’s Lantern’s Falmouth Stakes victory earlier this year, Woolf said: “I was in tears for most of it, having seen her struggle to her feet 15 or 20 minutes after she was born. It is why we do what we do and doesn’t come along very often. She has brought a lot of people a lot of happiness.

“I’m really looking forward to seeing her next season and then having her back here with us. To be there, when hopefully her babies are born, will be the icing on the cake.”

Snow Lantern currently heads the market for the Kingdom of Sun Chariot Stakes. Her closest rival in the betting is the Aidan O’Brien-trained Mother Earth, who be attempting to hand the master of Ballydoyle a fourth victory in the contest and follow up on her QIPCO 1000 Guineas success over the course and distance back in May when he re-opposing Saffron Beach was runner-up.

The Kingdom of Bahrain Sun Chariot Stakes – Facts & Figures (Since 2000)

History
The Sun Chariot Stakes was established in 1966 and commemorates the outstanding filly Sun Chariot. Bred by The National Stud and owned by King George VI, Sun Chariot won the Fillies’ Triple Crown (1000 Guineas, Oaks and St Leger) in 1942. Due to World War II, all of her Classic victories came on the July Course at Newmarket. She was trained by Fred Darling and partnered by Sir Gordon Richards for all her Classic triumphs.

Initially the Sun Chariot Stakes was a Group Two race staged over 10 furlongs and restricted to three year old fillies. It was opened up to older fillies and mares in 1974 and was reduced in distance to a mile in 2000. In 2004 it was upgraded to Group One status and currently forms part of the QIPCO British Champions Series.