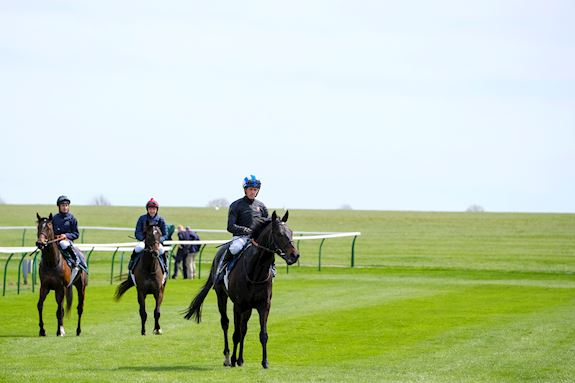 Trainer Charlie Appleby hopes With The Moonlight and Zakouski can end what has been a year to remember at Newmarket by securing him a Listed race double on tomorrow’s season finale (Saturday 30th October).

The Classic-winning handler has enjoyed plenty of big-race success on the Rowley Mile during the 2021 season, along with celebrating his 100th winner at the course following Siskany’s victory in last month’s bet365 Old Rowley Cup.

Although the domestic turf campaign may be coming to a close, the Newmarket handler is once again looking forward to supporting his local track in two of the three Listed prizes up for grabs on the eight-race card.

Appleby said: “Achieving our 100th Rowley Mile winner was great with Siskany but both there and the July Course we enjoy supporting.

“We enjoy racing there first and foremost and it supports our programme. To achieve what we have at both tracks was great for everybody involved.

“It is great racing there and to have the winners we have had, but more importantly the calibre of winners we’ve had at the Rowley Mile, has been great.”

Out to claim Listed honours first for Appleby tomorrow will be the hat-trick seeking With The Moonlight, who will bid to follow up wins at Chelmsford City and Wolverhampton in the British Stallion Studs EBF Montrose Fillies’ Stakes over a mile.

He said: “She had her first start at the July Course and then went on to win around Chelmsford. She then progressed again to go and win comfortably at Wolverhampton on her last start.

“It is a step up into Listed company but she gets the trip well and I feel she is ready to have a crack at this.

“You can see she is sharpening up with each run and we contemplated what to do with her after her last run.

“She has showed her wellness of late and with the ground being pretty sensible we felt she deserved a crack at it. Had it been soft ground, we would have probably given it a swerve.”

Zakouski has not been sighted since landing a Group Two at Meydan back in February, however Appleby believes the five year old can repeat his success of 12 months’ ago in the 888 Sport What’s Your Thinking Ben Marshall Stakes over a mile.

The Moulton Paddocks handler continued: “Zakouski is in great order but obviously this is his first run in Britain this year. However, we are pleased with his level of fitness.

“Hopefully if he can go and run well or win that might give him an opportunity to head to the Bahrain International Trophy next month. He won this race last year on bottomless ground.

“Our target over the last couple of years with him has been Dubai. We gave him one run last year before he went out to Dubai and did what he did.

“He goes under that carnival banner at Meydan and he deserves to have his summer off. We were originally going to take him straight to Dubai but he had shown his wellness, so we decided to have a go here.

“He has told us we should be doing more. We were giving him his holiday but he said I have had enough of it.”

Multiple Group One scorer Barney Roy had been entered in the 888 Sport What’s Your Thinking James Seymour Stakes, but Appleby has elected to swerve the mile and a quarter prize in favour of sending the seven year old straight to the Bahrain International Trophy on November 19th.

He said: “We had him in the James Seymour and I was delighted with his run in the Darley Stakes on a track that doesn’t really suit him with the undulations.

“We popped him in the race to have a look at it and this week. We then thought we have our invitation to Bahrain and that has been our main target and I thought I don’t want to go one race too many.

“I thought he didn’t need to have a hard race before Bahrain just for the sake of it.”

Looking back on his victories achieved at the Rowley Mile this year Appleby has selected four that stand out in particular.

He said: “We kicked that off at the Craven Meeting by winning the Craven with Master Of The Seas, who then went and ran so well in the 2000 Guineas.

“The Craven Meeting was also the starting of Creative Force and we all know what he achieved at Ascot on Champions Day.

“In the autumn winning the Dewhurst with Native Trail was very exciting and is a good pointer towards next year.

“He is an exciting horse to have through the winter as a worthy favourite for the 2000 Guineas.

“We all know the Dewhurst is the best trial for the Guineas, which is a race I’m yet to win but I’m getting closer to it and it is very much on the bucket list as they say.

“We then saw the emergence of Coroebus. In some ways, it was probably a good thing he got beat in the Royal Lodge.

“That gave us the chance to come back without a penalty in the Autumn Stakes, which is a great race to springboard on to a three year old career.”

Native Trail winning the Darley Dewhurst Stakes may have been the highest-profile success Appleby has tasted on the Rowley Mile this year, but equally as satisfying as that victory was the emergence of Creative Force.

He added: “Creative Force ended up being a Group One winner but what he did at the Craven Meeting on to the Guineas Meeting - I was pleased to see him do that.

“He is a little horse by Dubawi and he could have quite easily slipped the net.

“He had pleased us during the winter and the spring. To see a horse like him set off where he did and work his way up through handicap company to the next level and end up being a Group One winner was particularly satisfying.”

Though it is yet to be made official Appleby has all but secured his first ever Flat Trainers’ Championship crown, something he believes is very much a team effort opposed to an individual success.

Appleby added: “Without doubt it will be great to get on the CV and hopefully we can get it across the line.

“More importantly it is fantastic for the team and something I will always be in debt to His Highness Sheikh Mohammed for giving us the opportunity and giving me the support to achieve it.

“Once it is in our hands it will be great and hopefully everyone who has been involved in it can take huge satisfaction and be proud of what they have achieved as it has been a big team effort.”