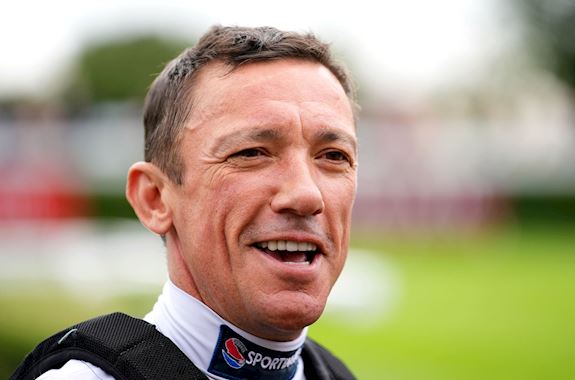 Frankie Dettori hopes to make the same sort of memories his first victory in the bet365 Fillies’ Mile evoked 31 years ago when bidding for a record-extending seventh victory in the Group One at Newmarket on Friday aboard the unbeaten Inspiral.

The John and Thady Gosden-trained daughter of Frankel, who is out of 2012 QIPCO 1000 Guineas runner-up Starscope, will take on eight rivals in the Group One feature race where she will bid to make it four wins from as many starts.

It might be 31 years since Dettori celebrated his first win in the race, which was then held at Ascot, aboard the Luca Cumani-trained Shamshir in 1990 but the popular Italian rider still has a vivid recollection of that memorable afternoon.

Dettori recalled: “Thirty one years ago I won my first Group One on Markofdistinction in the Queen Elizabeth II Stakes and just over half an hour later I won the Fillies’ Mile on Shamshir, who was one of Sheikh Mohammed’s.

“That was my second Group One ever so I remember the race extremely well.

“I flew to Canada that night and I drove the poor guy who was sitting next to me on the plane mad telling him how good I was!”

After making a winning debut over seven furlongs at Newmarket’s July Course in June, Inspiral followed up that success with a commanding victory over the same distance in the Listed Star Stakes at Sandown Park.

The Cheveley Park Stud-owned filly then took another step up in class and trip in her stride with a clear cut win in the Group Two May Hill Stakes at Doncaster last month.

However, Dettori believes she is still far from the “finished article”. He explained: “She has won her maiden, won a Listed race and won her Group Two last time out and now we will try to win that Group One with her.

“She has done nothing wrong so far and she is taking the usual progression after winning a Group Two to have a go at a Group One.

“I was really taken by her at Sandown. She won really well and I later rode the horse that finished second in that race, Wild Beauty, to win next time out in Canada so that is good form. We then went to Doncaster and she won again.

“She has got a great physique and lots of scope and she is not the finished article by any means. She is kind and talented and we expect her to progress over the winter. It is all positive stuff.”

The Classic-winning rider’s other victories in the race came aboard Glorosia (1997), Teggiano (1999), Crystal Music (2000), White Moonstone (2010) and Lyric Of Light (2011). And although Insipral is yet to race on the Rowley Mile, Dettori’s experience tells him she should have no problems in handling the track.

He added: “She has got the same profile as most of the horses I’ve won the race with. She has won the May Hill, which is the obvious mile race for fillies before this, and the usual progress is to try a Group One at the same distance.

“We don’t know if she will handle the track until we try it but I don’t see her having any problem.

“She is well bred, has got lots of scope and this was always the target to go for this race afterwards. Everything we have asked of her so far she has done and hopefully that will continue here.”

Inspiral is one of two runners in the race for the Gosden team alongside stablemate Bouquet, who arrives on the back of a victory on her most start at Ascot.

Meanwhile Jessica Harrington brings Magical Lagoon over from Ireland for Friday’s Group One contest and the trainer admits being “excited” at the prospect of running her on the Rowley Mile.

The Galileo filly has run only twice so far, finishing fourth of 14 over a mile on debut at Naas in August before winning a Group Three later the same month at the Curragh.

“I probably would have been more worried if the ground had been Good to Firm. I think she’ll go on the ground. She won at the Curragh and I think the ground that day was yielding. I think that suited her better than when she ran at Naas when I think it was a bit tighter that day and she won a barrier trial on the all-weather, so I think as long it wasn’t heavy I think she’ll be fine…

“They’ve all got to run down that hill and keep themselves balanced but she’s a very well balanced filly, she did run at Naas which has a fair few ridges down the back and she seemed to cope with that well.”

Asked about plans for a three year old campaign, Harrington added: “She’s a big filly and it’s just taken a bit of time to get her into shape and her fitness up to the right level.

“I suppose we might start off in the (1000) Guineas, but ultimately I think she’ll probably end up being a mile and a half filly.”

The James Ferguson-trained Mise En Scene is defending an unbeaten record after following up her Haydock Park maiden success with a Group Three victory in the Prestige Stakes at Goodwood last time out.

Concert Hall will attempt to give trainer Aidan O’Brien his sixth success in the race, and first since Rhododendron landed the 2016 renewal.

The field is completed by the Ralph Beckett-trained Prosperous Voyage, who finished one place behind Inspiral at Doncaster, last month’s Rockfel Stakes runner-up Cachet from the George Boughey yard and Wild Beauty and Majestic Glory, who will fly the flag for Charlie Appleby and Andrew Balding respectively.