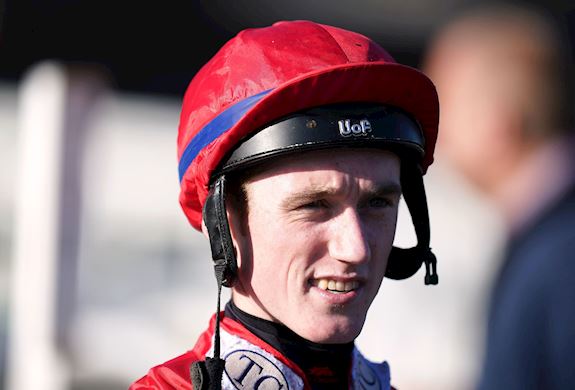 David Egan expects Bayside Boy to give a “good account” of himself on his Group One debut in the Darley Dewhurst Stakes at Newmarket tomorrow (Saturday) in a race the jockey believes is a proper end of season trial for next year’s QIPCO 2000 Guineas.

The New Bay colt will bid follow up his last time Group Two success in the Champagne Stakes at Doncaster and hand trainer Roger Varian a second win in the seven furlong feature race, having claimed the 2014 renewal with Belardo.

After making a winning debut at Newbury, Bayside Boy then filled the runner’s up spot behind Masekela in a Listed race back at the Berkshire track before defeating Her Majesty the Queen’s odds-on favourite Reach For The Moon on Town Moor.

Although Egan acknowledges Bayside Boy will have to improve again to inflict a first defeat on the Charlie Appleby-trained and Godolphin-owned odds on favourite Native Trial, he believes his mount fully deserves to take his place in the race.

Egan said: “It looks a very competitive field as it is every year. The Dewhurst is pretty much a two year old prep for the 2000 Guineas next year, getting them used to the dip.

“It looks like a competitive race and an open field. You could pick five or six horses out of the hat to go and win the race which is very exciting for sure.

“Godolphin’s horses are running out of their skin and hopefully our lad will as well. It is going to be a hard race to win but he is a horse to watch out for and he deserves to take his chance in a top class field.

“Hopefully he can give a good account of himself stepping up to Group One level.”

Reflecting on Bayside Boy’s last time out success Egan believes it was a win that showed he was not there just to make up the numbers.

Egan said: “It was a taking performance at Doncaster bringing The Queen’s horse down a few pegs.

“There was a lot of talk about it beforehand and the way it was doing things in its previous races but to beat Reach For The Moon in a close finish and get up on the line was a big performance from Bayside Boy.

“I was really happy with that and he has come forward for that.”

Having inflicted defeat upon an odds on rival last time out Egan is only too pleased to have Bayside Boy on his side after being on the receiving end of a similar result on his debut victory at Newbury.

Egan added: “He surprised me first time out. In that race I was on board Find who was 1-3 and there is Bayside Boy coming by me and passing me by three or four lengths. That performance first time out opened a lot of eyes.

“Luckily I got back on him second time out where he was out-battled by Masekela at Newbury.

“He hit the front 50 yards towards the line and Masekela’s experience probably just out-battled him but he learnt a lot from that and used it to good effect at Doncaster.”