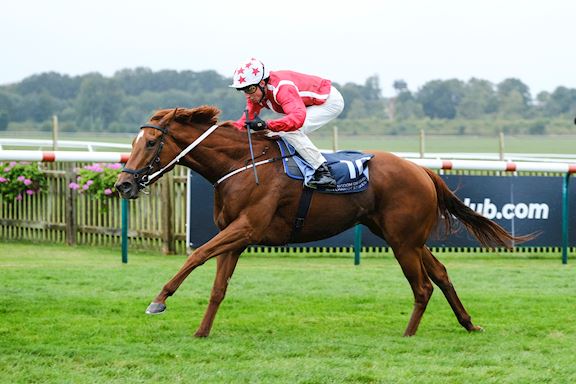 The arrival of October brings with it three certainties – the nights are drawing in, you’ll need to pack an umbrella everywhere you go and thrilling racing on Newmarket’s Rowley Mile is guaranteed.

The action at the home of horseracing finishes for 2021 next weekend with the two-day Dubai Future Champions Festival. But there was nothing end-of-season about the competitive sport served up to those who braved the wind and rain here at HQ.

Jane Chapple-Hyam admitted it was “extra special” to win her first Group One at Newmarket after Saffron Beach exacted revenge on her QIPCO 1000 Guineas conqueror Mother Earth in the Kingdom Of Bahrain Sun Chariot Stakes.

After several near misses in Group One races in the past the Newmarket trainer finally added a top level victory to her CV as her faith in the daughter of New Bay paid off with a game success in the mile feature.

Winning both her starts at the Rowley Mile as a two year old, Saffron Beach had to settle for second best in both the Nell Gwyn Stakes at the course on her return to action before finding only Mother Earth too strong in the QIPCO 1000 Guineas in May.

But she had hinted she was back to her best after putting defeats in the Cazoo Oaks at Epsom Downs and the Falmouth Stakes at the July Course behind her with victory in the Group Three Atalanta Stakes at Sandown Park last time out.

And, racing with the far side group here, the 5-1 chance was sent straight into the lead by William Buick, a position she would go on and hold all the way to the line.

Chapple-Hyam said: “I will just enjoy today and worry about the rest of the year on Monday. It is definitely extra special to win my first Group One in Newmarket as I’ve been here since I left school at 17. It has been a long time. I was a student that started at the National Stud and have worked my way through to where I am today.

“The race seemed to go like two miles not one mile. It was a hard slog that last furlong but I’m proud of her. It is good to get the Group One next to her name.

“She has knocked on the door in the Guineas and now she has gone and done it today. I’m really pleased for the connections. We knew there was a Group One for her and today was the day. You don’t mind waiting if they do it.”

Neil Callan has not had too many reasons to celebrate on the racecourse since ending an 11 year stint riding in Hong Kong to return to the UK.

But he was understandably delighted to partner Tatsumaki in the £150,000 Tattersalls October Auction Stakes to maintain the Marco Botti-trained colt’s unbeaten record and make it three from three in the six furlong prize.

Bursting through to head the field deep inside the final quarter of a mile the 3-1 chance quickly put distance between himself and the rest of the field before passing the post an eased down five lengths clear of runner-up and favourite Fearby.

Callan said: “He is the only decent horse I’ve ridden since I’ve come back from Hong Kong. He is such a straightforward horse, super chilled and he has got an amazing temperament of a character.

“I didn’t expect him to win first time out but the manner he won I thought he has got to be something and he has improved every time. As he has relaxed he has got faster but personally I think he will be a miler as a three year old so he has got any amount of improvement in him.

“I’ve been moaning a lot saying ‘come on give me some good horses’, but Marco has kindly given me quite a bit of support. The first horse I get on is the best one I’ve ridden so far so hopefully it is onwards and upwards.

“It is hard to say when you go to Group class how good they are but if you put Fearby as a guide off ratings he has just annihilated him.”

TUITE SUCCESS AS VIA SISTINA LEAVES FRENCH FORM BEHIND

Trainer Joseph Tuite believes bigger and better days lie in wait for Via Sistina, who passed all of her rivals to run out an impressive winner of the British EBF Premier Fillies’ Handicap.

After failing to beat a single horse in a Group Two at Paris-Longchamp last time out the daughter of Fastnet Rock made the most of a drop in class when taking the mile and a quarter prize by four lengths to complete a double for jockey Jamie Spencer.

Tuite was not there to see it in person but watched on TV and said: “It just didn’t quite happen on her French trip. She came back a little bit low and we just sat and bided our time and give her a break.

“When the ground comes right she is a very good filly. I’m sure she is a black type filly. She handles that ground very well. Hopefully she doesn’t get sold like a lot of my good ones do. She is as big as a house and she will only improve with time.

“She was too keen in France and the plan was to miss the kick and drop her in and there is no better man in the country than Jamie Spencer if you are going to do that.

“We stepped her up to a mile and a half in France and I think she will get that in time if you ride her conservatively. But I think at this moment in time we will keep her at this trip.

“I’ve no particular plan for her but there are plenty of options in black type races for her.”

CASH PAYS DIVIDENDS AND EARNS QUOTES FOR THE CLASSICS

If you’re the type who spends October looking for clues for next year’s Classics then you could do worse than write Cash in your notebook.

Now we can’t promise you a financial return in used notes, but the horse by the same name was so impressive in landing the MansionBet Best Odds Guaranteed EBF Maiden Stakes on debut that bookmakers immediately made him 33-1 for both the QIPCO 2000 Guineas and the Cazoo Derby at Epsom Downs next season.

The son of Shamardal came from last to first to defeat favourite Al Nafir, who is a full brother to four-time Group One winner Ghaiyyath by a length and a half to get the ball rolling for Spencer.

And trainer David Simcock said of his 8-1 winner: “He is a big horse but he did everything right today. He is a nice prospect for next year.

“The mare stayed well and won over a mile and a half and stayed a mile six. We don’t get that many of that make of car so it is nice to find one!

“If he got there today great, but if he didn’t there then there was always going to be another day. It can make life harder when they win first time out. I don’t think he will be doing anything else this season.”

MURPHY GETS THE JOB DONE QUICKLY FOR TRAINER COAKLEY

Trainer Denis Coakley reckons Nell Quickly is just “starting to get going” after setting up a potential tilt against Listed race opposition with victory in the British EBF Premier Fillies’ Middle Distance Handicap.

Having either won or finished runner-up in her five previous starts this term, The Gurkha filly continued to prove a model of consistency in the mile and a half contest when staying on powerfully under champion jockey Oisin Murphy.

Picking up well during the closing stages the 100-30 chance showed resilience when it mattered most to defeat last time out Sandown Park scorer Crema Inglesa by two lengths and claim her fourth victory of the year.

Coakley said: “She didn’t mind the ground and stays well. She travelled well all the way and Oisin (Murphy) was confident about her so hopefully she will keep improving.

“She has just taken time to mature. She had one run at two, then she was unlucky first time she ran on the all-weather back this season at Wolverhampton as she was too far out of it and it was a short race over a mile.

“Once we stepped her up to a mile and a quarter and then a mile and a half she then showed what she can do. Hopefully she is just starting to get going.

“We will look forward to a good year next year. There is a mile five Listed race we might try at Lingfield on the November 1st but that would be it.”