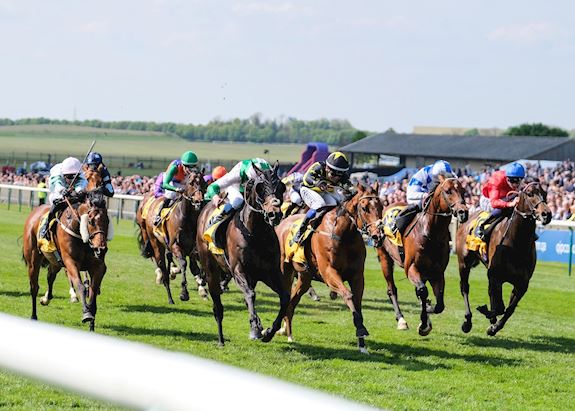 The Charlie Hills-trained Khaadem (7-1) made every yard a winning one in the Group Three Betfair Palace House Stakes (5f) on his third start for current owners Jim and Fitri Hay.

The six year kept on gamely in the final furlong to see off the challenge of Existent (25-1) and score by a neck.

This was only Khaadem’s second success since the 2019 Stewards’ Cup at Glorious Goodwood, which he won in the colours of the late Hamdan Al Maktoum.

Winning jockey William Buick said: “He’s got plenty of class and on those quick five furlong tracks like here he’s good. He’s got some amazing mid-race pace and especially here you’re able to nurse him into the dip and come out the other end. He’s a very talented horse.”
Alex Cole, Racing Manager to owners Jim and Fitri Hay, added: “The boss is in Dubai, but she’s very happy.

“We only bought the horse at the end of last year off Shadwell and he ran well on his first run in Dubai and then got drawn badly.

“We came back here on a retrieval mission so we’re over the moon as it’s hard to win these races. He loves the fast ground and seems to get on with the jockey well. Jim and Fitri live in Dubai so we always try to have runners there and he’s a proven horse, we bought Equilateral as well from Charlie. I’d think he’d have to go to Ascot now and stay over five furlongs, seeing as he’s won a Group Three here.”

Stuart Williams, trainer of runner-up Existent, said: “He has only really been a sprinter since he has been with us. I think we still need to train him to be a sprinter and this is all part of the process. We still hope there is some improvement in that sphere.

“He is a nice straightforward horse to deal with and hopefully he will now go on to the King’s Stand Stakes. Tom (Morley, owner), and his mum, have won the race twice before and we entered him for it last week. It is a bit of an ask, being rated 101, but we think he definitely warranted an entry and I think it should suit him. I think five is his best trip for us.”

Roger Varian, trainer of Saint Lawrence (11-1) who was another three-quarters of a length away in third, said: “We are delighted with him. Of course we would have preferred to have won, but it was a good comeback run and one we can build his season off. I’m really delighted.

“It was probably trainer error as a two year old thinking as he is by Al Kazeem he would be fine over seven furlongs.

“In his races, especially early on last year, he looked strong. He ran over seven at Newbury and then came back to six in the Pavilion at Ascot. He travelled strong but didn’t quite finish it off. We thought the way he travelled maybe a fast run stiff five is his ticket and it didn’t look far off it.

“He is entered in the King’s Stand. James (Doyle, jockey) said he can go five or six and we might look at the Leisure Stakes at Windsor which is an easy six in about two weeks’ time."