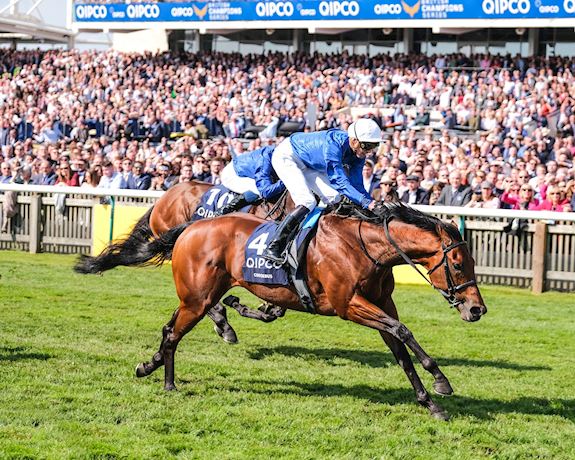 Coroebus (5-1) prevailed from his better-fancied stable companion Native Trail (5-4 Favourite) in the first Classic of the season, the QIPCO 2000 Guineas (1m) at Newmarket today.

It was a fourth Classic winner for trainer Charlie Appleby following his triumphs in the Derby (2018 Masar, 2021 Adayar) and St Leger (2021 Hurricane Lane) and a first for jockey James Doyle. Doyle had come close to QIPCO 2000 Guineas success in the past, finishing runner-up aboard both Kingman (2014) and Barney Roy (2017).

Travelling supremely well throughout Coroebus hit the front entering the final furlong and went on to win by three-quarters of a length from Native Trail, partnered by William Buick, with Irish raider Luxembourg another length and a half back in third.

Winning trainer Charlie Appleby told ITV Racing: “I’m delighted for the whole team but also he’s a home-bred. He’s a Dubawi - I’m not saying we’re spoilt but I’d like to think I know the Dubawis by now. We’ve had enough of them through our hands and he’s shown us all the right signs.

“That was always going to be a hard call for William (Buick) to get off Native Trail to get on him. But I’m also delighted for James (Doyle) – he’s an integral part of the team and for him to have his first English Classic winner is fantastic and for us to provide it, it’s even more special.

“I don’t think William will have any excuses. He’s just been beaten by the better horse. I could see James was travelling for fun and that’s what this horse does – they can’t go quick enough for him. He’s a seven furlong horse who could potentially get a bit further than a mile in time, I think, but I’m just delighted for the whole team.

“You can’t take anything away from Native Trail. He’s gone down, as always, on his sword but one horse had been there and done it and one had the scope to potentially go there and do it.

“I think we’ll potentially try to keep them apart to be brutally honest. It would be a shame for them to keep butting heads with one another and on the evidence of what we’ve seen today they are the best two three year old colts around to date and after nice healthy discussions over the next few weeks we can probably say one will go to Ireland and one we can keep our powder dry and go straight to the St James’s Palace.”

Appleby went on to say subsequently: “Obviously it is a relief. I was third with Pinatubo, second with Master Of The Seas, so we had been getting closer and hopefully our time was going to come.

“With both of those horses, every target we have set for them they have met. Native Trail came up here and won the Craven and we galloped Coroebus that morning.

“William said ‘Charlie, if you didn’t have Native Trail I couldn’t be more excited about riding Coroebus’. He said what a second horse to have.

“William couldn’t get off Native Trail given what he has achieved and so like I say, coming into I felt we had two live contenders.

“The draw never worried me. I’m a big believer if you have a good horse and it is a straight line keep it simple and the best will come to the top at the end of the day and that is what they have achieved.

“James is an integral part of the team and for him to have his first British Classic for us is very special because he is such a great team player. He has to sit there and see William getting first choice all the time and I never ever see him quiver or get upset. Off he goes and rides the same race, day in day out. I take my hat off to him as he is a true sportsman.

“I’m in a privileged position that I have had so many of Dubawi’s through our hands. I’m feeling we are starting to know them.

“This horse has always shown like any good horse natural pace and when they have that natural pace in the physique he has you can’t do nothing apart from get excited about it.

“It is a nice discussion to have with the team but I would let this horse go straight to the St James’s Palace Stakes and let Native Trail go back to the Curragh where we have seen him be impressive before and take him over to the Irish 2000 Guineas.

“I see the pair sticking to the mile at the moment.”

Winning jockey James Doyle was close to tears as he told ITV Racing: “I’m super proud of Charlie (Appleby). For once I have to say I’m actually emotional to ride a big winner today. This race has always been something that’s always annoyed me, looking at replays over and over again of Kingman’s Guineas, Barney Roy’s Guineas, and then it goes so simple the way it has today.

“The main thing speaking to William was that he (Coroebus) has been very relaxed in his work but the furst run of the year you always have to watch that they don’’t want to do too much too early and from that draw my only worry was getting left without any cover but after going for half a furlong I was pretty happy.

“He still slightly travelled a little bit stronger than was ideal and I had to fetch him back a couple of times but he just warmed into the race so easily I could have afforded to sit for a bit longer but it must have been Ryan I think, something came a bit quick on my outside and I kind of had to go fior it then. If that didn’t come then he’d have been much more impressive but we were going a little bit on what we saw at the back end of last year at Newmarket. You’re banking on potential he showed that day but by God he’s got potential alright! I have to say the turn of foot he showed there was incredible.

“I remember after Adayar won The Derby I spoke to Charlie and I said ‘am I ever going to get one of these rides?’ and he said ‘don’t worry - we’re getting it right now and there’s every chance it’ll happen next year we’re just starting to get the hang of this game’ and he was dead right once again!

“He’s (Coroebus) got an incredible turn of foot. Whether he wants to go further is completely up to the team. We can just ride these horses – I’;m not a genius at race planning at all so we leave that job to Charlie and his team and they do so well.

“William just came up to me said ‘you deserved that one’. He could see how much it meant to me. I was emotional and we’re best of friends and it’s tough out there. You’re competing against each other day in, day out and we sit next to each other but it’s been that way for about 15 years so it’s just great.” 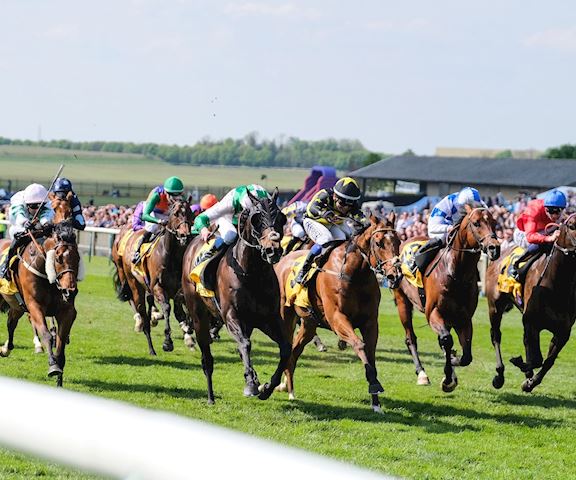