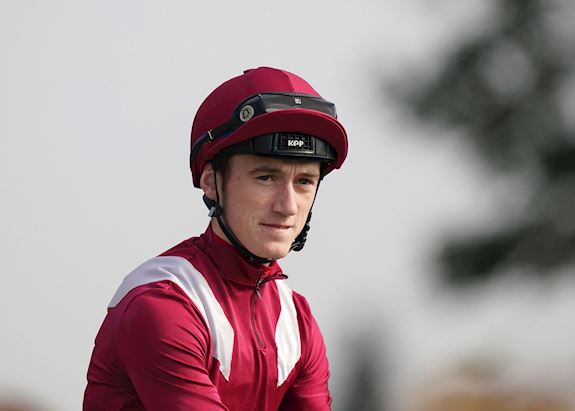 David Egan has hailed his jockey father John for being a “great help” and inspiration as they prepare to do battle at Newmarket tomorrow, but insists they both want to win the QIPCO 2000 Guineas as much as each other.

In 2019 the pair became the first father-son duo to ride against each other in a Classic since the 1880s when they both lined up in the QIPCO 1000 Guineas.

Three years on and 22 year old David is set to ride Eydon in the opening Classic of the season, with his 53 year old dad John partnering the Stan Moore-trained The Wizard Of Eye.

Despite competing against each other on a regular basis, it will be only the second time the pair have taken each other on in a Classic, after Egan junior finished third aboard Qabala for Newmarket handler Roger Varian in the 1000 Guineas of 2019, while his father finished further back in the field in 12th on Garrel Glen for now-retired trainer Mark Tompkins.

Although looking forward to renewing what he describes as a “very competitive” relationship with his father on the big stage, he insists that it would give him greater satisfaction if he could supply Group One-winning trainer Varian his first QIPCO 2000 Guineas winner.

Egan said: “Having my dad in the weighing room is normality for me, which might seem unreal to other people.

“Whether we are in the weighing room or out on the track he is just another jockey who wants to win as much as me so from that point of view it is very professional.

“Growing up, Dad was a great help to me and pushed me in the right direction and things like that.

“I’m sure he (Dad) would be one of the first to congratulate me but it would be fantastic to do it for my boss Roger Varian as he has been a big supporter of mine. I’ve not had a winner at the top level for him. It would be a big milestone for me to do that for him.”

Unlike his father’s mount Eydon has previous course experience after running out the ready winner of the Listed bet365 Feilden Stakes earlier this month.

While Eydon is now dropping back a furlong, Egan junior believes he assured stamina will come into play at the business end of the contest.

He added: “We went a slow pace (jn the Feilden) and he had to show a lot of speed to get into the race and he did everything with ease. I’m hoping that race would have sharpened him up.

“They are going to go a lot stronger pace than most of these horses have ever been. It will be a test of stamina that last furlong up the hill. I’m hoping that will be an asset we have against some of the opposition.

“He is not a horse that is short of speed but at the same time he is a big individual who I think will be getting further as well. “

Plenty of credit was attributed to Varian for rolling the dice with Eydon in the Feilden Stakes, but the Group One-winning rider believes much the praise for making that decision belongs to his passionate owner.

Egan said: “He had been working well and had developed nicely through the spring. It was Prince Faisal’s decision to run him in the race as you would have thought we would have aimed him at a maiden then taken slow progression.

“Prince Faisal knows the family well and he won the Feilden with Olden Times who was maiden going into the race as well. It is fantastic to have a horse that can take that step up in class with ease and hopefully he can do that again on Saturday.”

Although Eydon has genuine claims of running into a place, Egan junior believes that his father’s mount could easily out-run his odds of 200-1.

He added: “His horse The Wizard Of Eye has done a bit of travelling around the world. He went to Saudi and didn’t run a bad race.

“He was a good two year old who is a big type that has got a lot of experience unlike a few of the others in the race. He has got an outsider’s chance.”

Like most in the race Eydon will have to take another step forward to trouble unbeaten favourite Native Trail. However, Egan junior is confident that his mount will show he is not just there to make up the numbers.

He added: “It is a big step up to a Group One but I’m full of confidence in my horse’s ability and what will be will be. Stepping up in grade with a horse like this as a jockey you have to have confidence in your horse and I do.”