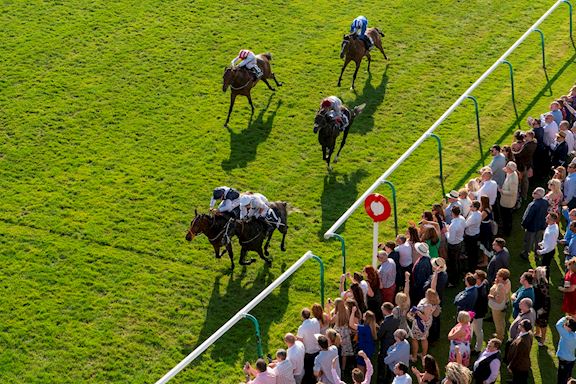 Karl Burke has the Group 1 Juddmonte Middle Park Stakes as the objective for both of this top class juvenile colts, Havana Grey and Unfortunately. The Juddmonte Middle Park is one of the highlights of the Cambridgeshire Meeting, from Thursday 28th September to Saturday 30th September. Other feature races unveiled today include the newly sponsored Group 1 Juddmonte Cheveley Park Stakes, the Group 2 Juddmonte Royal Lodge Stakes and the Group 2 Shadwell Rockfel Stakes.

Newmarket Racecourses is very much looking forward to hosting the inaugural “Juddmonte Day” on the Saturday of the three day meeting, highlighting the extension of the successful partnership already in place with Juddmonte Farms. The day will feature a seven–race card which will be televised live by ITV Racing and commence with the back-to-back running of three of Britain’s most prestigious juvenile events. The races will be worth a combined total of £500,000 in 2017, rising to £675,000 by 2018 - a near 50% increase in prize money from 2016.

Unfortunately was an impressive recent winner of the Group 1 Prix Robert Papin at Deauville whilst Havana Grey added to his Sandown Listed win with victory in the Group 3 Molecomb Stakes at Goodwood.

There are a total of 44 entries in the £200,000 Juddmonte Middle Park Stakes including 7 trained by Aidan O’Brien. These are headed by Sioux Nation, winner of the Group 2 Norfolk Stakes at Royal Ascot and the Group 1 Phoenix Stakes at the Curragh on Sunday. Another high class entry from Ballydoyle is Gustav Klimt who impressed many racegoers with his win in the Group 2 Superlative Stakes at Newmarket’s Adnams Course. That day he beat Charlie Hills’ Nebo who is also an entry in the Juddmonte Middle Park.

Another Cambridgeshire day highlight is the £200,000 Group 1 Juddmonte Cheveley Park Stakes. 48 entries include two from America in the form of the Wesley Ward pair of Happy Like A Fool and Fairyland. Happy Like A Fool was second in the Queen Mary Stakes and has stayed in England for an Autumn campaign whilst Fairyland, who ran in the Albany Stakes at Royal Ascot would be making a return journey.

Not surprisingly Aidan O’Brien, who won the race last year with Brave Anna, has a strong hold in this race with 7 entries. They are headed by Clemmie who won the Group 2 Duchess of Cambridge Stakes on Newmarket’s Adnams July Course beating Nyaleti who has franked the form at Ascot in the Princess Margaret Stakes and is also an entry in the Juddmonte Cheveley Park Stakes.

Clive Cox has entered Heartache, who beat Happy Like A Fool in the Queen Mary Stakes at Royal Ascot.

We’ll know a lot more about them after they both run in the Group 1 Prix Morny over 6 furlongs at Deauville on Sunday. Havana Grey will need to prove he stays 6 furlongs in Group 1 company. Unfortunately will need to continue his progressive form but we think he’ll be a force to be reckoned with. There is no doubt that the application of a visor has been behind his improvement in form. We hope that if Newmarket has some juice in the ground they will both have outstanding chances.