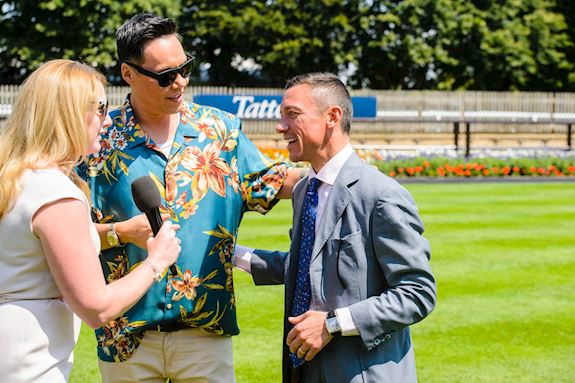 Betty F will make the giant leap from maiden company straight into a Group 1 when she is partnered by Frankie Dettori in the Juddmonte Cheveley Park Stakes on Saturday 30th September, during The Cambridgeshire Meeting, having made the acquaintance of her big race pilot in a gallop on Newmarket’s Rowley Mile Racecourse this morning (Thursday 21st September).

With Dettori aboard for the first time, Betty F pleased her onlooking trainer, Jeremy Noseda, and owner-breeder, Charles Fox, when she worked over five and a half furlongs, finishing upsides her lead horse without ever being asked for maximum effort.

A daughter of the unbeaten dual World Champion, Frankel – now a hugely successful young stallion based at Juddmonte’s Banstead Manor Stud - she was the comfortable winner of her only start to date, the Heath Court Hotel EBF Novice Stakes, at Newmarket’s Adnams July Course on 26th August.

She is one of 27 entries for the £200,000 Juddmonte Cheveley Park Stakes which is run over six furlongs of the Rowley Mile.

“I was delighted with Betty F this morning and she will now go for the Juddmonte Cheveley Park where Frankie [Dettori] will ride.”

“She is a filly with lots of talent, she has quality, and in my opinion is good enough to go for a Group 1. In an ideal scenario she would have another couple of weeks and we could fit in another prep run but I am very grateful to Michael Prosser [Jockey Club Racecourses East Region Head Of Racing] for letting us come here today.”

“We are on a tight schedule, she’s had a nice outing and my hope is that she’s learnt more today than she would have just training her at home. She didn’t need anything for fitness, it was just another experience for her in the build to where we want to go.”

“A similar thing happened to me once before, with a filly called Carry On Katie [back in 2003]. She won her maiden well and then I wanted to run her in the Lowther and gave her a racecourse gallop at the July Course.”

“She not only won the Lowther but went on to win the Cheveley Park [ridden by Dettori] and I am keeping my fingers crossed that we could be in the same sort of scenario with this filly.”