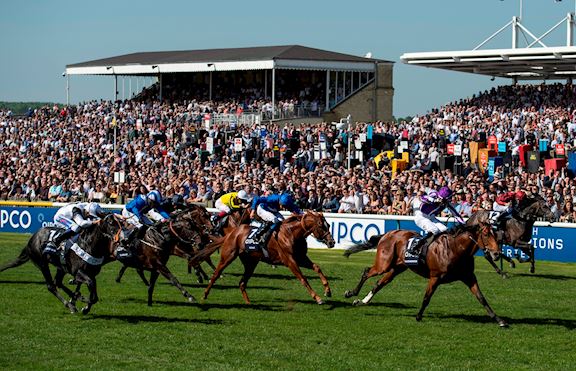 At 12.50pm, 11 ponies and riders will line up for this year’s renewal which will cover three furlongs of the Rowley Mile Racecourses and will feature a number of recognizable colours often worn by professional Jockeys, including the famous blue and white silks of His Highness Sheikh Hamdan Bin Rashid Al Maktoum.

Following a successful first year of sponsorship whereby the Shadwell sponsored pony, Briar Smokey Joe, won the 2016 renewal of the Shetland Pony Grand National at Olympia, two pony and jockey combinations will now sport the renowned blue and white silks. And, one of the Jockeys just happens to be the daughter of the retained Jockey to the Shadwell Team, Jim Crowley.

Alice Crowley will partner Ulverscroft Midnight Blue, the second pony to be sponsored by Shadwell who will line up against team mate’s Briar Smokey Joe and Zak Kent, also in the Shadwell colours, as well as Mahagadartin Bees Wax and Rocco Dettori, who will be wearing the same silver and maroon silks worn by his father, Frankie.

The Shetland Pony Grand National is an organization which takes 8 to 13 year old Jockeys across the UK on Shetland Ponies to race and entertain all in the name of a nominated charity, leading to an appearance of 11 jockeys and ponies competing at Olympia: The London International Horse Show in December each year. This year the team’s dedicated charity is the Bob Champion Cancer Trust whereby Mike Cattermole will represent the charity on Friday and also receive a cheque from the sponsors.

"The tie-up between Shadwell and the Shetland Pony Grand National was such a great success last year we had to be involved again in 2017 and in addition to Smokey Joe, we are also sponsoring Midnight Blue, who is the mount of Alice Crowley, daughter of Shadwell's retained rider Jim.

"Shadwell are proud to sponsor the card at Newmarket on Friday and the Shetland Pony Race is a must see, kicking proceedings off at 12.50pm. It really is a great spectacle seeing those ponies thunder down the Rowley Mile - it's a huge amount of fun and all for a great cause with a donation being made to the Bob Champion Cancer Trust on the day."

Along with the fantastic racing, the annual Beer Festival also returns to the Cambridgeshire Meeting with an array of real ales, ciders and perries for racegoers to try. The Oktoberfest themed Beer Festival Marquee will also host live music each day from different acts and will have a selection of old fashioned pub games on offer, including a skittle alley. On Saturday, entertainment in the Family Enclosure will include a giant inflatable obstacle course as well as face painting, offering something for all ages.