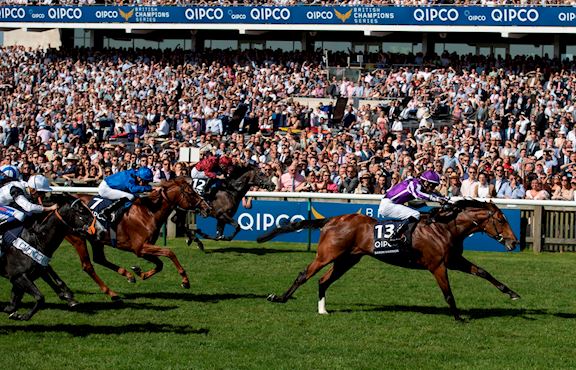 Headway and James Garfield on target for QIPCO 2000 Guineas

Headway and James Garfield are both ready for the Group 1 QIPCO 2000 Guineas at Newmarket’s Rowley Mile Racecourse on Saturday, 5th May having recently put the finishing touches to their preparations for the first Classic of the year.

The pair were among the 26 acceptors for the £500,000 one mile event – which heralds the start of the 2018 QIPCO British Champions Series – at yesterday’s (Tuesday’s) scratching stage.

Trained by William Haggas, Headway took part in a seven furlong gallop on the Rowley Mile this morning (Wednesday), ridden by James Doyle. Twice Group 2-placed last year, when second in the Coventry Stakes at Royal Ascot and third in the Gimcrack Stakes at York, Headway has raced once this term, when making up over five lengths in the final furlong to land the Listed Spring Cup at Lingfield on 3rd March.

James Garfield is trained by George Scott and is owned and was bred by Scott’s father-in-law and brother-in-law, Bill and Tim Gredley. He has already done his trainer great credit by landing two prestigious Newbury races - the Group 2 Mill Reef Stakes in September and the Group 3 Greenham Stakes last Saturday.

Scott is only 29 years of age and has held a training licence for little more than two years, in comparison with Aidan O’Brien, who has six candidates for a race that he has already won a record eight times, and Mark Johnston, who is responsible for leading fancy Elarqam, and has been training since 1987.

The top British challengers for a Classic that has been won by overseas raiders seven times in the last ten years are Masar, easy winner of last week’s major Newmarket trial, the Group 3 bet365 Craven Stakes, and the aforementioned Elarqam, unraced since posting a comfortable success in the Group 3 Tattersalls Stakes on the Rowley Mile last September.

“His gallop this morning was exactly how I hoped it would be. He’s in pretty good shape and just needed a nice blow out. I wanted him to work with two other decent horses to encourage him to relax.”

“He handled the dip well and he’s on top of his game. He needs fast ground so it suited us to bring him here for a gallop rather than race him on soft. We wouldn’t run him in the Guineas on soft ground.”

“On pedigree he should stay, he just needs to relax. We hope that he can improve and he has a turn of speed that gives him a chance in an open year.”

“I have been delighted with James Garfield since his win in Saturday’s Greenham Stakes. Weight-wise he is back to where he was before the race and he is bright and happy.”

“I had him ready to win a trial but when they have been off for a while you always hope that they will come on for the run. He was a bit keener than he has been in the past in the Greenham and I put that down to freshness – the race will have taken that out of him which should allow him to settle better.”

“He is pretty versatile as far as the ground is concerned - I think he is better on fast ground but his two best performances have come with plenty of cut.”

“There does, however, have to be a question mark about him staying the stiff mile of the Rowley Mile and simple logic states that soft ground would put more emphasis on stamina.”

“It looks an open QIPCO 2000 Guineas and he deserves his chance. It is unimaginably exciting to have a Classic runner in my third full season with a training licence.”

“The Guineas is just a proper race, it’s recognised around the world, and I feel incredibly lucky and privileged to be saddling a horse with an outside chance. To be doing it for my wife’s family, who are a Newmarket family and also bred the horse, makes it even more special.”