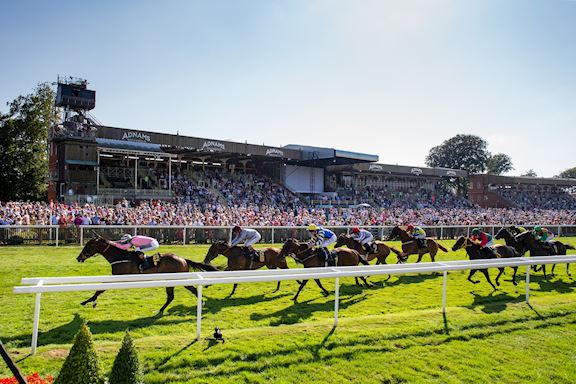 Redkirk Warrior was in action on the Newmarket gallops this morning, taking part in his first blow-out since he finished tenth in the Group 1 Diamond Jubilee Stakes at Royal Ascot on 23rd June.

Trained in Australia by David and Ben Hayes and Tom Dabernig, the Notnowcato gelding is a three-time Group 1 winner Down Under.

He is hoping to add to that tally in the £500,000 Darley July Cup, which is run over six furlongs of the Adnams July Course on Saturday, 14th July, and is the fourth of seven races in the Sprint category of the QIPCO British Champions Series.

“I rode Redkirk Warrior in a light piece of work on the Al Bahathri polytrack gallop this morning and he seemed extremely well in himself.”

“He seems to have held his weight reasonably well, we have tweaked his training slightly and it’s now just a case of keeping him ticking over until race day.”

“To be honest we still can’t quite put our finger on the reason for his performance at Ascot and are hopeful that we will see more of the horse we know come next weekend.”

“Regan Bayliss, his regular rider back home, is arriving on Saturday. He has never ridden in Europe before and is hoping to pick up some rides before the July Cup.”