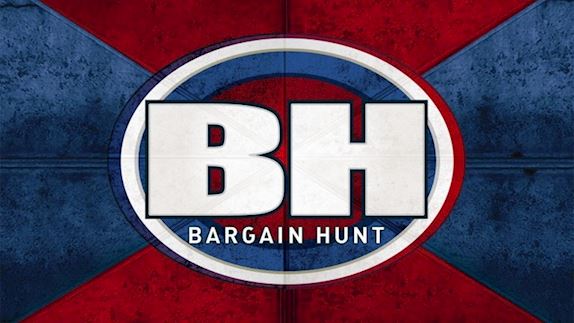 The BBC’s Bargain Hunt returns to Newmarket’s Rowley Mile course on Sunday 19 August for the second consecutive year, to film the popular lunchtime programme at the Antique & 20th Century Fair.

It will be time to hunt out a historic treasure as Bargain Hunt’s Red team take on the Blue team in a bid to find the jewels in the crown around the fair’s 200+ stands of antiques, art deco and collectables on offer. Both teams have £300 and one hour at the fair to find and buy antiques that they have to sell at auction, hopefully making money with their bargain.

The Bargain Hunt presenters in attendance on the day will be Anita Manning, John Cameron and Caroline Hawley.

Why not join in with the fun yourself and hunt for a treasure or two at the Antique & 20th Century Fair? Perhaps you’ll see history being made live on screen, or see yourself behind some of the contestants as they battle for the best bargain.

As well as hundreds of stalls inside and outside, there will also be antique valuations on site; free valuation and appraisals; a restoration workshop and a specialist collectors’ room for stamps, medals, cards, coins and ephemera. In addition, there will be free parking and a full catering service on site.

Tickets are available on the day; to find out more, please visit: newmarket.thejockeyclub.co.uk/public-events

The Red team takes on the Blue team in a bargain hunt. Both teams have £300 and one hour at a fair to buy antiques which they have to sell at auction, hopefully making money into the bargain.

That’s Bargain Hunt, presented by a team of antiques experts.

Once the teams have shopped for their antiques, the experts go shopping with any leftover money. Their purchases are ‘bonus buys’ and each team has to decide whether or not to take their expert’s item to the auction. But there’s a catch! Just because it has been bought by an expert doesn’t mean that it’s going to make money – it’s a gamble all round.

Before the sale, our presenter and the auctioneer discuss the chances of each item making or losing money for the teams. The teams get to keep the difference between what they spend on an item and the hammer price at the auction house, so it’s all to play for as the auction begins.