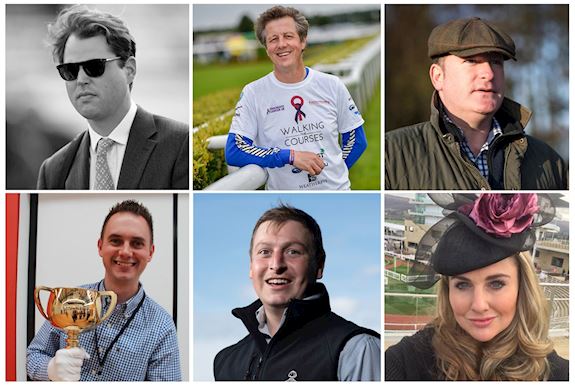 Over £5,000 raised to date for the 2018 Newmarket Open Weekend charities ahead of Saturday’s Commentary

Over £5,000 has already been raised on behalf of the 32Red Newmarket Open Weekend beneficiaries as donations have poured in for the six competitors taking part in the annual Commentary Competition at Newmarket’s Rowley Mile racecourse, this Saturday, 22nd September.

This year’s Commentary Competition features three of Newmarket’s best training talent in Charlie Fellowes – who is also Chairman of the 32Red Newmarket Open Weekend – Richard Spencer and Ed Vaughan, leading racing journalists Hayley Moore and Lee Mottershead; and Racing Welfare Trustee and prolific fundraiser Richard Farquhar. All six will take their position in the commentary box on the Rowley Mile as the Gold Season – six weeks of top-class autumn racing at racing’s headquarters – commences this Saturday with the Rewards4Racing Cesarewitch Trial Handicap Stakes headlining the card.

All those taking part in the commentary challenge are bidding for the title of top fundraiser, which will not only award them the coveted Julian Wilson Memorial Trophy, but also the prize of lunch for six people at the Rowley Mile’s Champions Gallery at the 2019 Craven Meeting. With over £5,000 raised in total so far through the combined efforts of all participants, there is all to play for with just days to go until the big event.

Don’t miss your chance to hear the Commentary Competition in person – tickets for Saturday’s Cesarewitch Trial Day at Newmarket Racecourses are still available. For more information and to book tickets, please visit www.newmarketracecourses.co.uk

“It is fantastic that through the combined efforts of all those taking part in the Commentary Competition that we have already raised in excess of £5,000 in support of the beneficiaries for the 32Red Open Weekend.

“We are all practicing very hard ahead of Saturday’s challenge so please do continue to lend your support by donating to these very worthy causes via our individual Just Giving pages. I am very grateful to all of this year’s participants for their time and commitment and may the best commentator win!”

You can donate to the competitors via their individual JustGiving pages below, which will be open until Sunday 30th September, a week after the competition has taken place.

About the contenders
Richard Farquhar

Richard is a lifelong racing fan, small-time owner and works for a technology business involved in racing, The Racing Manager. He became a familiar face on racecourses in the UK during 2015 and 2016 as a consequence of his charity project, Walking The Courses. He walked around England, Scotland and Wales, linking all 60 of Britain's racecourses, in a journey on foot of 2,910 miles. Over the course of the campaign, he raised more than £560,000 for Racing Welfare and Pancreatic Cancer UK. Following the completion of the project in April 2016, he became a Trustee of Racing Welfare.

He has a profound admiration for racing commentators and finds the prospect of the Commentary Competition decidedly daunting!

Charlie Fellowes has been training in Newmarket for five years and was the youngest licensed trainer in the country when setting up base at the historic St Gatien Cottage Stables in 2014. Charlie previously worked with some of the best trainers in racing, including James Fanshawe, Nicky Henderson and Lee Freedman in Australia.

By his own admission, Charlie became infatuated with racing from the age of six and is now translating his passion to training with success – not just in the UK where Barbary was a winner as his first ever runner in 2014 – but internationally too. Prince of Arran’s exploits in Dubai earned over £100,000 in prize money and Moonlit Show provided the yard with its first stakes win in the Blenheim Stakes at Fairyhouse. Charlie has this year been appointed Chairman of the 32Red Newmarket Open Weekend and hopes the event can inspire a new generation of racing fans.

Hayley Moore has grown up around horses all her life, and with her grandfather and father both leading lights in the training ranks, she was riding before she could walk!

Hayley is best known for her presenting work on At The Races but, like her brothers Ryan, Jamie and Josh, she is adept at race riding. She has ridden in races since the age of 16, both on the Flat and over jumps, and won the Ascot Ladies’ Diamond race twice. She also represented Great Britain in the Fegentri series where she rode all over the world, including Mauritius. When not presenting or riding out for her father Gary, she keeps fit, and recently completed her first ever marathon in Brighton. Hayley is hoping to seamlessly transfer her presenting skills into the world of commentating at Newmarket on 22nd September.

Lee Mottershead is in his 22nd year with the Racing Post. He is one of the organisation's senior writers and produces news stories, features, interviews and big-race reports, together with a weekly column. Aside from working in the UK, Lee has posted copy from Australia, America, France, Ireland, Germany and India. He is the author or editor of four books and is a regular contributor to TV and radio.

Richard Spencer has worked in racing for the last 10 years, with his first position at Peter Bowen’s in west Wales. He moved to Barry Hills in 2006 and continued as pupil assistant with Charlie Hills. At the end of 2012 Richard moved from Lambourn to Newmarket and spent two years as an assistant to Michael Bell at Fitzroy House. Richard joined Rebel Racing at Albert House Stables at the end of 2015 and took up the position of Trainer when his licence was awarded at the end of March 2016. He is now based at Sefton Lodge Stables and has already enjoyed Group 3 success this year with stable star Rumble Inthejungle.

Richard is not only a talented trainer, having already achieved a Royal Ascot winner, he is also an accomplished race rider, having ridden 25 winners in Point-to-Point races. He also rode under rules as an amateur, with notable wins in a Hunter Chase at Ascot in 2014 and the Royal Artillery Gold Cup at Sandown in 2012.

Ed Vaughan has been training in Newmarket since 2004. Born in County Cork, Ed is an experienced and intuitive horseman and learnt his trade at some of the very best racing yards to be found in the world. After successfully graduating from the Irish National Stud course, he spent four years working in training facilities in America, followed by a move to Godolphin for whom he ran a pre-training barn in Ireland. It was here that he broke in the legendary Dubai Millennium as a yearling. Two separate two-year spells followed as an assistant to both Charlie Mann and Noel Chance, before a switch to Alec Stewart.

Following Alec’s death in 2004, Ed initially took out a license on a temporary basis before going on to train in his own right. He has trained on both sides of Newmarket, training at Grand House Stables before switching back to the ‘Bury Side’ in 2011. Since training in his own right, Vaughan’s more high-profile horses have included Dance and Dance, Kotsi and Audemar.