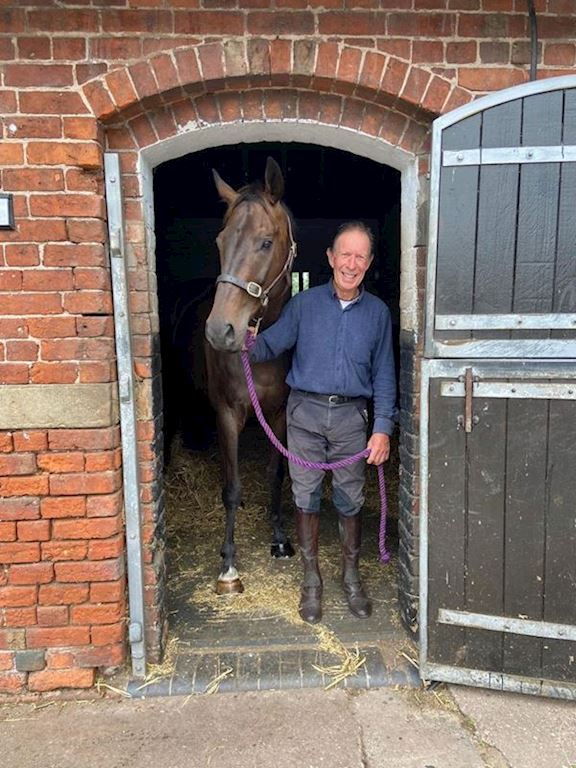 Frankie Dettori may be the master of the flying dismount but Colin Moore could produce post-race celebrations to match those of the charismatic Italian, admitting he would be “ecstatic” if he claimed glory in the 351st Newmarket Town Plate this Saturday (August 28th).

At the age of 79 Moore is by some way the oldest rider set to participate in this year’s renewal of the amateur contest. Staged over three miles and six furlongs the Newmarket Town Plate was inaugurated in 1666 by King Charles II, who remains the only monarch to win the race, having claimed it the same year.

Possessing the same level of enthusiasm as he did when taking his first ride as an aspiring jump jockey in 1960, the Walcot Lees-based amateur hopes he and his mount Ballyrath can better their fourth place finish in the 2019 Town Plate.

Although Moore, who rides out on a daily basis for trainer David Loughnane, tops the age charts in the Newmarket Town Plate he falls just short of Harry Beasley, the oldest jockey ever to ride in a race, who at 83 finished unplaced aboard Mollie in the Corinthian Plate at the now defunct Baldoyle racecourse in Ireland in 1935.

Moore said: “Although I was on the back foot from the word go on my last appearance in the Town Plate it was still a great experience to be involved in but, touch wood, it will be a different result this time.

“I got dropped on the road by Ballyrath not long ago and people asked what I was doing and I said I was practising my flying dismounts. I said Frankie Dettori is good at it but I do mine at about 20 miles per hour!

“Ballyrath has won the Grimthorpe Gold Cup over four miles and a furlong and the Crudwell Cup pointing. I would say he is the best stayer in the race but the one thing I’m praying for is a drop of rain which might be hard to get at the end of August.

“We have a good few coming down to watch on the day which is great. I'd be ecstatic if I could win it and raise a nice bit of money for the Injured Jockeys’ Fund I’ve had a few jockey friends injured in the past and they do a wonderful job.”

Like most who pursue a career working with horses, Moore was bitten by the racing bug at an early age following a trip to a local riding centre with friends in the school holidays before taking up his first post at a racing yard at the age of 15.

He said: “I lived about 400 yards from Chester Zoo in a cul-de-sac and at the bottom of a field there was a horse riding school. There were about three or four of us who decided to have a go at horse riding one day.

“That was the only lesson I had and I asked if I could help bring the horses in and if there was a spare one to ride she let me ride that out for nothing.

“I went to Bill Brookes when I was 15 and I was seven stone and stood at 5ft 2ins. I always say it was the horse manure that made me shoot up as the lightest I could do when I eventually started riding in races was 10st 1lbs.”

It will be 60 years in November since Moore celebrated his one and only winner during his time in the saddle, when steering 50-1 chance Son Of Tam to glory at Worcester in November 1961, but it remains a day he still remembers vividly.

He added: “I had my first ride in 1959 on a mare called Ocean Express at Hereford and she finished sixth in a handicap hurdle.

“My only winner was aboard a 50-1 chance called Son Of Tam which I remember well.

“He was a big horse but when he went near the tape he backed off and I was out the back so I didn’t get away well. I got round the first bend though and pulled him out wide. He got to the front and he was never headed.

“He beat a horse called Curry’s Kin, who they thought was the next Sir Ken (triple Champion Hurdle winner). All the lads backed him on the Tote where he paid out nearly 300-1.

“Later that afternoon I had my first race in a chase aboard a horse called Reprieved who after that race I was asked to ride in the Hennessy Gold Cup that year which Mandarin won.

After losing his battle with the scales Moore eventually called it a day in the saddle during the 1963/64 campaign before turning his hand to steel fixing, however his passion for working alongside horses has always remained close to his heart.

Moore said: “It was a tough decision to call it a day as a jockey. I had a few falls but I was lucky and the only thing that I broke was my heart when I had to pack up.

“I felt I had just started to make a bit of a name for myself but I felt weak at times and I was not doing the horses justice. There was not the dietary programmes they have in place now to help control your weight.

“They were building a power station at Ironbridge so I went labouring there and I watched the steel fixers working and they were on double the money so I thought I would have a go at that.

“I spent a few years learning the trade then set up a business with my brother-in-law, before setting up ABC Reinforcing Limited which is a firm I run with my sons Alex and Ben.

“I’ve often been involved with pointers and have ridden out at various yards during this time though. People ask me why I’m still riding out at my age but I just enjoy it and I don’t think I have ever got that out of my system.”

Having worked with Moore for the past 18 months Helshaw Grange trainer David Loughnane admits he would take both “pleasure and pride” if the veteran rider could pass the post in front in the Town Plate.

Loughnane said: “I’d love to still be riding at his age. It is a testament to him for keeping going and enjoying it so much.

“I think it is a massive proof of what racing is to people. He comes up here every morning in every lot with a smile on his face. It is brilliant to see and he is a good part of the team.

“There are plenty of winners that have come out of here from Colin riding them out every day and we would all take some pleasure and pride in seeing him win it.”