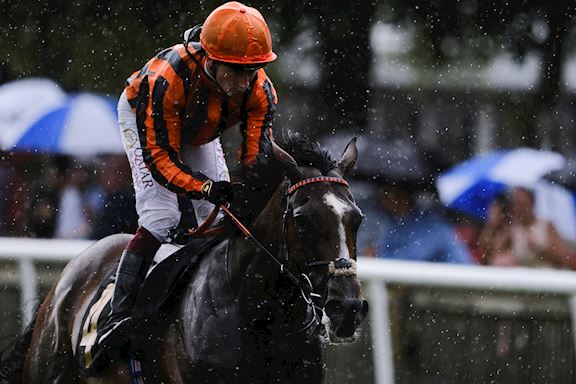 The Group Three Racingtv Profits Back To Racing Sweet Solera Stakes was the highlight of Newmarket’s seven-race programme on the July Course on Saturday 7th August and went to Majestic Glory, trained by Andrew Balding who is enjoying a fine season and currently leads the trainers’ championship.

Majestic Glory provided owner Gearoid Costelloe with a day to remember when taking her form to new heights after securing the biggest success of her career in the 100% Racingtv Profits Back To Racing Sweet Solera Stakes.

Having opened her account at the third time of asking on the July Course over six furlongs just eight days ago, the Andrew Balding-trained daughter of Frankel took both a step up in class and trip in her stride to claim the Group Three feature.

Although slightly boxed in between rivals the 5-1 chance soon made her presence felt once the gaps appeared to mount a serious challenge approaching the final quarter of a mile of the seven furlong prize.

Finding plenty when called on her for maximum effort Majestic Glory swept past long-time leader, and eventual third Value Theory, inside the two pole before proving a length too strength for the 5-2 favourite Wild Beauty.

Gearoid Costelloe, owner, said: “This is our first adventure and on the Flat. It doesn’t get much better racing up in this class.

“She did it well to come through the gap she had to go through as well. I’m very happy.

“Andrew (Balding) kept saying she keeps improving and he was very confident this morning, thankfully he was right.

“She was bred to go over further so to win over six furlongs last time was a bonus so hopefully she will go on from this, fingers crossed.

“We’ve not got a plan we will do whatever Andrew tells us. He is doing a very good job and we will just follow him. Thankfully it has all worked out today.

“It is fantastic to have a winner here. It was very important getting the Black Type and she is by Frankel who is one of the best sires around.”

It was a second pattern race victory at the track this year for winning jockey David Probert, who steered stablemate of the winner Sandrine to Group Two glory in last month’s Duchess Of Cambridge Stakes at the Moët & Chandon July Festival.

Although admitting it was hard to compare the two fillies he was quick to praise the attitude of Majestic Glory.

He said: “It was a quick turnaround but she handles this track very well and she has got a great attitude.

“She got slightly boxed on along the inside but she is small enough and nimble enough to find a way out of that trouble and she has hit the rising ground well.

“She is progressing quite nicely. I think she is much different to Sandrine as she will probably want a mile whereas Sandrine has got a little more speed in her.

“It is hard to compare the pair of them as Sandrine is pretty special.”

The Dabirsim filly clearly knew what was required on her racecourse bow after running out an easy winner of the seven furlong contest, which has been claimed in recent years by subsequent Group One scorers Wuheida (2016) and Winsili (2012).

Despite taking time to reach top gear the 7-4 favourite was comfortably on top of her rivals at the end of the race after passing the post a length and a half clear of runner-up Bellstreet Bridie.

Beckett, speaking away from the track, said: “She is a very straightforward filly edging towards being sleepy. She took a while to get going but she went through the line well.

“She is a big tall, leggy filly that first and foremost has only just come to hand. Hopefully she will develop through the autumn.

“We will see where we go from here as she might need a week or two afterwards to get over this but I’d hope she would be up to Group race level.

“She is still fairly unfurnished and she will be seen at her best next year.”

Equally as impressed with the performance was winning rider Rossa Ryan.

He said: “She is a big raw type and that was a lovely introduction. I thought I found myself a fair way back but I was always in control of the race.

“I think she is a lovely filly that will progress well and whatever she does this year will be a bonus to what she could be next year.”

Oisin Murphy believes he still has a “long battle” ahead of securing a third Flat Jockeys’ Championship despite landing a 35-1 treble at Newmarket today (Saturday 7th August) which was completed aboard Dancing Harry in the Federation Of Bloodstock Agents Handicap.

Victory on the Roger Charlton-trained four year old in the concluding mile and three quarter contest was a 15th success since Monday 2nd August for Murphy, who secured a five-timer at Kempton Park on Wednesday and a treble at Brighton on Thursday.

After ending a run of 12 defeats at Sandown Park last time out, the well-supported Evens favourite had little trouble in following up when dispatching his three rivals by five lengths under the dual champion jockey.

Murphy said: “I’ve been getting on lots of horses with chances and thanks to all the owners and trainers for putting me up but it is the staff that do the hard work getting them to the races.

“I don’t know if this is the most winners I’ve had in a week as I don’t keep track but Dancing Harry was in the right race today and the form from Sandown had worked out well and he stayed on well.

“They are all hungry and top class riders in behind me so it will be a long battle to the end.”

Saeed Bin Suroor will take aim at the bet365 Cambridgeshire with Storm Damage (5-4 Favourite), who formed the middle leg of Murphy’s three-timer when carrying top weight to glory by five and a half lengths in the Join RacingTV Now Handicap over a mile.

The Godolphin handler said: “He has improved and he is a solid horse. Sometimes in his races he can be keen but he settled today and looked well.

“We will maybe him take him to the Cambridgeshire and back to Dubai after that.

“We could look at Listed or Group race with him, but it is more likely we look at the Cambridgeshire.

“He was too keen at Royal Ascot (Jersey Stakes) but he has come back well and has now won two races. I’m happy with him.”

Fellow Flat jockeys’ championship contender William Buick maintained the pressure on Murphy with a 7.25-1 double of his own initiated by Quintillus in the Watch Every Race Live On Racing TV Handicap by half a length.

The Charlie Appleby-trained Dubawi gelding built on his third in the Britannia Stakes at Royal Ascot on his return to seven furlongs when prevailing by half a length.

Alex Merriam, assistant to winning trainer Charlie Appleby, said: “He was a bit keen early on and he didn’t help himself but he got his head in front and he got the job done.

“The Britannia was a 30-runner handicap and that probably helped him settle a bit but he definitely had the toe for seven today.

“I’ve not spoken to Charlie but I would have thought Dubai could possibly be on the radar.”

Buick completed his double when partnering Classical Wave (7-2) to victory in the Thank You To RacingTV Members Handicap.