It was a busy weekend, with racing at Aintree and Sandown Park on Saturday and Huntingdon on Sunday. Here are the five that caught our eye.

Altior in The Betfair Tingle Creek

The Tingle Creek is always a race that delivers a dramatic story and this year’s renewal was no exception. The reigning Champion Chaser was taking on a small field, but it was one deep in quality. Plus he prefers better ground, so the soft surface and battering rain all seemed to set up a classic renewal.

If his supporters were worried that he was not looking quite as effortless and that mudlark Un De Sceaux was looking menacingly brilliant at his fences, it was only for a moment. The two battled over the last three fences before Altior stamped his authority and skipped away.

Extraordinarily this is his owner, Patricia Pugh’s first racehorse.

Walk In The Mill in the Becher Chase

Connections of Walk In The Mill were desperately disappointed when he was ruled out of this year’s Randox Health Grand National on the morning of the race due to lameness, having only just got in as a reserve. Fast forward nearly eight months and owner Baroness Harding must be wondering what might have been, given his bold display and victory in the Becher Chase this weekend, at his first attempt over the big fences.

It’s now all go for the big one in April, although it is unlikely we will see much of him before then. Jockey James Best, speaking to Sporting Life, said: "I know this isn't the National - but what a thrill. He's just incredible - jumps from fence to fence. April can't come soon enough."

Kim Bailey has some exciting younger horses in his yard, but it was old favourite Charbel who made good on his promise this weekend in the temporarily renamed Peterborough Chase. Bailey would be the first to admit that the horse has often just come up against one too good for him, but he showed his class and ran the rest of the field ragged in the hands of the brilliant Noel Fehily.

“I’m delighted," Bailey said. "If any horse deserved to win a decent race he deserved it as he’s been knocking around for a while."

Bailey has discounted The Festival but that hasn’t stopped many bookmakers eyeing Charbel up for the Ryanair Chase. 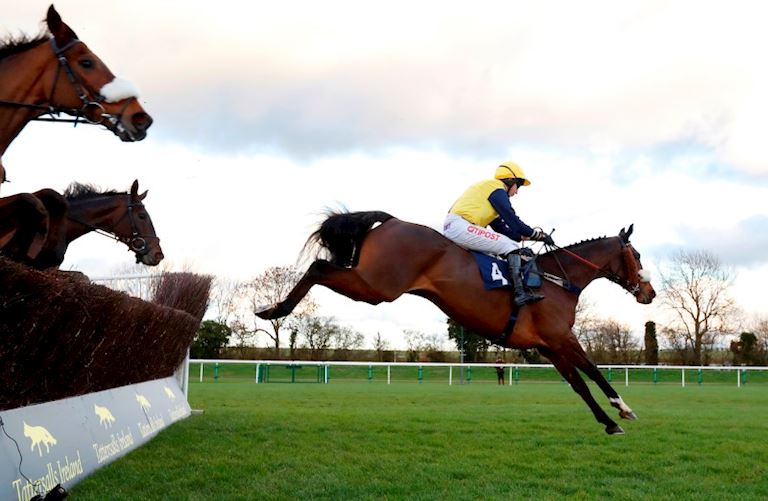 This race was meant to be all about Lalor and his route to the Racing Post Arkle, but you can never discount Paul Nicholls. It was his Dynamite Dollars who looked the most impressive in a race previously won by some very good chasers.

Prior to this Dynamite Dollars was last seen finishing second to Lalor at Cheltenham, but the rain-softened ground suited him much better and set up a cracking finish with Irish raider Ornua up the Sandown hill.

OK this wasn't at one of our courses, but there was much to note in the John Durkan. There were one or two gasps before two out as Jack Kennedy and Shattered Love shut the door on Min and Ruby Walsh, but the strong travelling favourite wasn’t to be inconvenienced.

In the famous Susannah Ricci silks, he skipped up the inside after two out and his superior turn of foot saw him take an unassailable lead, giving his trainer Willie Mullins a fifth win in the 2m 4f contest.

The Ryanair Chase looks the likely target come The Festival next year, having proved the trip is just fine for him. Asked which race he thought Mullins would aim Min for, jockey Walsh replied: “The target’s to avoid Altior! Wherever Altior goes we’ll go the other way!