Five things we learned on the first weekend of 2019

From French raiders to Venetia on fire, here is what we learnt as the new year got underway!

Ok, so there’s an argument we didn’t learn anything watching Laurina win by 48 lengths at Sandown Park on Saturday.

The plan was that we’d find out just how good this unbeaten six-year-old mare really is and whether she can pose a serious threat to reigning Unibet Champion Hurdle king Buveur D’Air at Cheltenham in March.

With two non-runners and only Sensulano to beat, Laurina was the most convincing of winners at the Surrey track. But, if the conversation jockey Ruby Walsh and trainer Willie Mullins had just minutes after crossing the line is any kind of yardstick, then we learned enough.

We learned that Mullins now believes Walsh will pick Laurina to ride in the Unibet Champion Hurdle over any of his yard’s other contenders for the big race come March 12th.

We learned that bookmakers saw enough in the performance to immediately cut her from 9-2 to 7-2.

And we learned that Mullins might now not even bother giving her another prep run before the Champion Hurdle, for which she would receive the mares’ 7lb allowance.

Read into that what you will. But, right now, the prospect of crowning King Buveur D’Air or Queen Laurina come March 12th is as real as it’s ever been.

IF IN DOUBT … BACK VENETIA

There’s a phrase in racing at the moment (well, if there isn’t then there should be): “If in doubt, pick the Venetia Williams runner.”

With an astonishing 10 winners from her last 27 runners the Herefordshire trainer boasts one of the most enviable records in the sport right now.

Saturday was no exception. First she saddled the winner of the Unibet Veterans’ Handicap Chase, Houblon Des Obeaux, at Sandown Park.

Then, just 15 minutes later, she watched on the big screen as Calipto took the spoils 110 miles away at Wincanton in the BetVictor Guaranteed Run For Your Money Handicap Chase.

With both races shown live on ITV Racing the Williams yard’s success was noted by more than just the keenest of Jumps fans.

With six runners at Chepstow on Monday – including two short priced favourites - you wouldn’t bet against her adding to the tally.

That’s French for, “He came. He saw. He conquered”, if you’re interested. Which is exactly what Master Dino did at Plumpton on Sunday.

A £60,000 bonus put up for any horse winning the race AND at The Festival ensured a quality field in a novice chases which probably won’t be rivalled for class anywhere in Britain before March, let alone at the East Sussex course.

And in the “leggy and athletic” (Mick Fitzgerald’s words, not ours) Master Dino, French trainer Guillaume Macaire could have his first ever Festival winner on his hands.

Now the 6-1 favourite for the JLT Novices’ Chase, he proved he can win outside his native France, jumps for fun and can run on soft as well as good ground.

Owners Simon Munir and Isaac Souede will have plenty of chances to find themselves in the winners’ enclosure at Jump racing HQ in two months’ time with their British-based horses.

Now, it seems, they might be bringing some Gallic flair to proceedings too.

Lizzie Kelly was the toast of punters across the land again at the weekend. 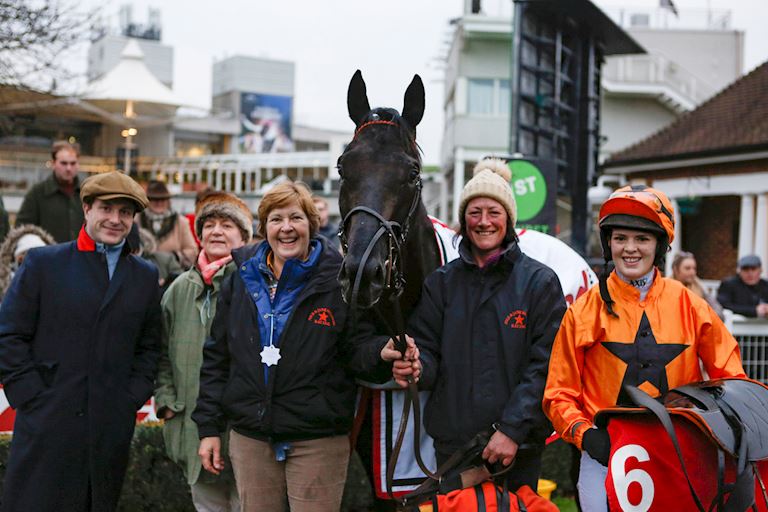 Not just for securing another Saturday winner live on ITV Racing with Monsieur Lecoq in the 32Red.com Handicap Hurdle, but for the way she dealt with some unwanted attention afterwards.

After easing her mount home – made all the more satisfying as it was trained by her mother Jane – Grade 1-winning jockey Lizzie was subjected to some harsh words on Twitter by one punter who claimed: “Lizzie Kelly wins another horse race. There’s hope for anyone….”

Lizzie’s riposte was as swift as it was popular with racing fans. “I’m as surprised as you are pal!” she said.

Ask a trainer how they prepare a horse for a tilt for the big fences of the Magners Cheltenham Gold Cup and the Randox Health Grand National and you won’t often hear the reply: “Send them hurdling.”

However, that’s exactly the plan for Bristol De Mai and Walk In The Mill, according to their handlers.

Nigel Twiston-Davies is eyeing up a run in the Grade 2 Rendlesham Hurdle at Haydock Park on 16 February for his stable star. Bristol De Mai has already won over the larger obstacles at his favourite course, winning the Betfair Chase at the end of last year.

But his disappointing effort in the 32Red King George VI on Boxing Day has prompted Twiston-Davies to re-plot the grey’s route to the March showpiece.

Meanwhile Walk In The Mill’s connections are looking to protect his handicap mark by sending him out over hurdles not just the once, but possibly twice, before the April steeplechase.

Trainer Robert Walford said of last year’s Becher Chase winner: “We don’t want to run over fences until the weights for the National come out because if he goes down in the handicap he might not get a run and if he goes up he’d have too much weight.”