Five things we learnt from this weekend's action

5 things that caught our eye this weekend.

NOTHING AMATEUR ABOUT O’CONNOR AND WALEY-COHEN

We were expecting plenty of Cheltenham clues over the weekend, but who would have guessed the clearest ones would come from two horses last seen in a four-runner race at Plumpton.

Ok Corral beat Impulsive Star with his ears pricked that day and both booked their tickets to the same race at The Festival, presented by Magners, with good wins in contrasting affairs at Warwick.

JP McManus telegraphed the signs clearly enough when he flew crack Irish amateur Derek O'Connor to Warwick for the first time, and Ok Corral was foot perfect in the Listed novices' chase, giving the jockey a first ever win for trainer Nicky Henderson. It was a performance that had the 4m National Hunt Chase written all over it, and he qualifies for a tasty £60,000 bonus there.

Fellow amateur Sam Waley-Cohen clearly meant business when he got down to his bare minimum weight in the Classic Chase. Despite a gruelling week in which he needed to get down from 10st 3lb to 9st 13lb (skipping breakfast on Saturday to finally get there), he performed wonders in getting Impulsive Star home in front in a fiercely contested affair. 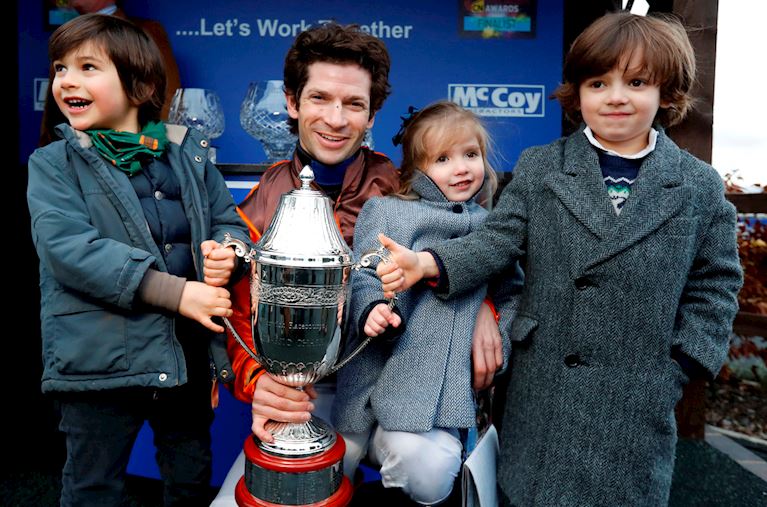 The National Hunt Chase, on the opening day of the Festival and once regarded as the amateur riders' Grand National, is the obvious target for him too.

Cheltenham will surely be on the agenda too for the principals in Kempton's 32Red Casino Chase, but it's doubtful they can beat horses like Min, Footpad and Waiting Patiently in the Ryanair Chase.

"Blackie" did Jockey Club Racecourses ambassador Bryony Frost proud, as always, in getting up late for second, but he was no threat to little Top Notch, a dual Festival runner-up who lived up to his name with a gutsy display.

His win will have certainly have cheered up owners Simon Munir and Isaac Souede, whose joy at seeing their French raider Master Dino win impressively in the UK last weekend was almost immediately ruined when it emerged he has an injury so serious he will miss the Festival and the rest of the season.

Top Notch is said to be the best loved of all of Nicky Henderson's stars by staff and riders. That's saying something when Altior, Buveur D'Air and Might Bite are also there to choose from. 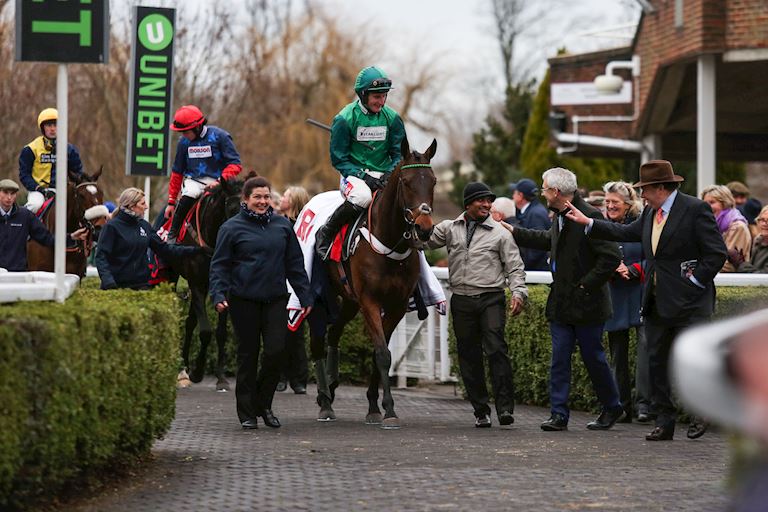 Young Jonjo O'Neill was burdened with expectation when he followed in the footsteps of his famous dad, but it's a case of so far so good.

He now stands only ten wins away from having his claim cut to 3lb after enjoying the biggest win if his career so far in the Unibet Lanzarote Handicap Hurdle, a race which way back in 1996 helped put a certain AP McCoy on the map when he won it on Warm Spell.

It turns out that this year's Lanzarote was probably not a race for Festival clues, but Big Time Dancer is an improver and he had his name on the trophy a long way out. Unlike the favourite.

Kloud Gate, trained like Warm Spell by Gary Moore, barely took off at the first hurdle. He was always on the back foot thereafter, and punters were left licking their wounds.

Another chip off the old block

Bryony Frost would have loved to have been at Warwick as well as at Kempton but it proved largely academic, since she did not miss a winner. It was a different story though for James Davies, son of Grand National winner Hywel.

Kinder logistics allowed Davies to complete an across the card double with his only rides of the day, winning at Warwick on Generous Day and at Kempton on Glen Rocco, whose owners include TV host Jeremy Kyle.

Glen Rocco bolted up and will make obvious appeal in the valuable 188bet Chase on trials day back at Kempton on 23 February.

Now there's a date for your diary.

The award for the weekend's cleverest bit of placing has to go to Warren Greatrex with Bailarico, who added the 3m novice hurdle at Kempton to last month's Leicester walkover to make it seven wins in eight months.

Cheltenham and Aintree may feature one day, but Greatrex is also eyeing a crack at the Goodwood Stakes, won last summer by Lil Rockerfeller

Not bad for a horse who was so lazy that Godolphin soon gave up on him and who cost just £20,000 after a point-to-point win last January.