CHELTENHAM THE PERFECT PLACE TO KICK OFF JUMPS SEASON PROPER

Ask a trainer or a jockey when the Jumps season starts and their answer will likely be simple – straight after the last one has finished.

With a summer Jumps programme keeping top riders in the saddle and yards busy for pretty much 12 months of the year, there is no entirely fallow period for those who prefer their horses jumping obstacles than bursting out of stalls.

However, few could argue that the Jumps season only really feels like it’s underway properly when the tape goes up at Cheltenham in October. The fact that two days of top class action at The Showcase takes place just days after the curtain has been drawn on the Flat season at British Champions Day is no accident.

And while the Friday at Cheltenham provides a great opportunity for us to enjoy a first look this term at some prospects for the weeks and months ahead, those at work will have to wait until Saturday for their jump racing fix on ITV.

Turn up at Cheltenham or tune in then for some old favourites, some new kids on the block and plenty of others trying their luck for the first time over fences or hurdles.

A seven race card – all of them Class 2s – might even sign-post some early contenders to return to the Cotswolds in March for the sport’s own ‘Olympics’, The Festival TM 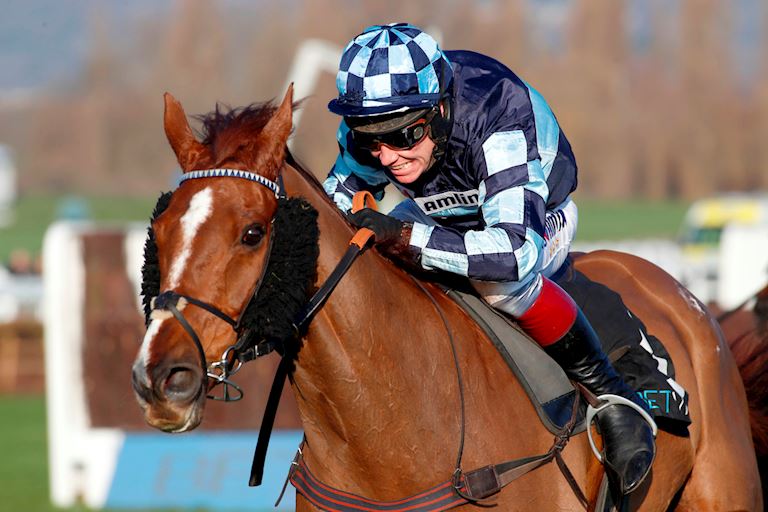 And we now know it will definitely showcase some of those who might fancy themselves for a shot at the world’s most famous steeplechase, the Randox Health Grand National in April.

Two of the 20 declared for the first race of the day – the Matchbook Betting Exchange Handicap Chase – ran in the Aintree showpiece earlier this year and many more will be familiar names if you love your jump racing.

Rock The Kasbah and Minella Rocco will have been in your sweepstake for the Grand National this year, while other stayers of note in this contest include The Young Master, Cogry, West Approach, Cobra De Mai, Rocky’s Treasure and Shantou Village.

Trainer Nicky Henderson’s decision to try his superstar Altior over a longer trip this season offers some of his rivals in the 2 mile Chase division the opportunity to win some silverware of their own this term.

The legend himself has never contested the Randox Health Chase at The Showcase, but this race might just give us some insight into a couple of horses whose trainers might fancy their chances over the shorter distance, even if most of the field will be competing in handicaps in 2019-20.

Saint Calvados led for some of the Betway Queen Mother Champion Chase at The Festival before tailing off to finish eighth against the mighty Altior in March. But he is a bold front-runner and trainer Harry Whittington will be planning to win bigger races than this with him this term.

Gary Moore will himself have high hopes for Knocknanuss this season, a horse he gave festival experience to in the Racing Post Arkle at Cheltenham and the Doom Bar Maghull Novices’ Chase at Aintree in March and April this year. 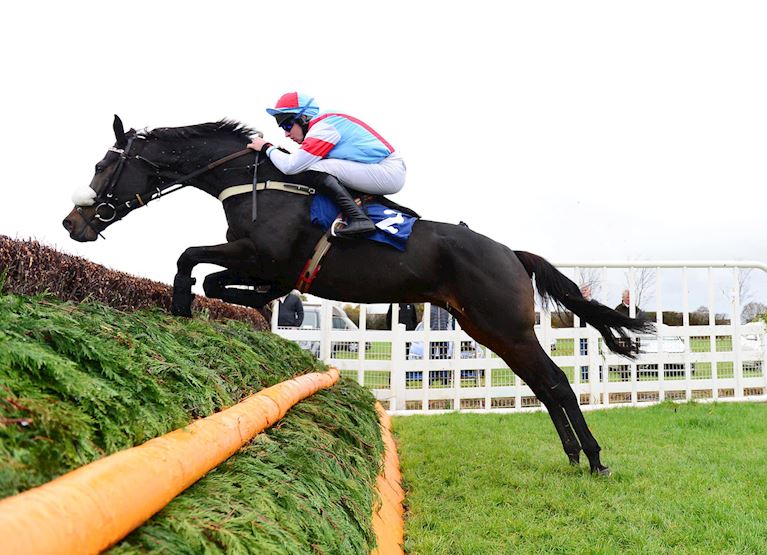 And Paul Nicholls will be hoping Brelan D’as can repeat the feat achieved by his Modus in the same race last year, although his appearance comes after more than 200 days away from the track.

Mcgroarty, Doitforthevillage, Duke Of Navan, Gino Trail and Vaniteux will also add some class (not to mention some familiar names) to a race not to be missed come 3.10pm on Saturday.

Say the words ‘Irish’ and ‘Cheltenham’ and plenty would forgive you if the name John McConnell wasn’t the first to spring to mind.

With 30 winners to his name already this term, the trainer had 11 entries for the two days at Cheltenham. Rain has put paid to all but one of those taking part, but his solitary declaration is his unbeaten hurdler Construct, who will take his chance against some strong opposition in the Masterson Holdings Hurdle.

Among the biggest dangers will be Paul Nicholls’ Quel Destin, who was as short as 4-1 for this year’s JCB Triumph Hurdle at The Festival in March - having won the William Hill Victor Ludorum Juvenile Hurdle at Haydock - but finished fifth to the impressive Pentland Hills.

Another French fancy here is Nigel Twiston-Davies’ Torpillo who, like Quel Destin, has already had one outing this term, winning at Chepstow by five lengths. Torpillo wasn’t at his best at The Festival this year when racing too keenly and finishing 15th in the Boodles Juvenile Handicap Hurdle (Registered as The Fred Winter) but he is expected to go off favourite in this.

Another you can expect in the mix is Tom George’s Fanfan Du Seuil, who finished fifth in the Boodles Juvenile Handicap ahead of Torpillo. He followed that up with a disappointing seventh at Aintree on day one of the Randox Health Grand National Festival - behind Pentland Hills in the Doom Bar Anniversary 4-year-old Juvenile Hurdle - but certainly has enough class to be considered here.

For McConnell this represents a great opportunity to test one of his stable’s 2020 contenders against some of the UK’s. Regardless of how Construct fares in the softer-than-ideal ground, shrewd punters might do well to have a look at the 16-1 on offer about him having a winner at the 2020 Cheltenham Festival. Don’t say we didn’t tell you.

The dust will barely have settled on the first two days of Cheltenham’s season when all eyes switch to Aintree on Sunday.

There was barely a dry eye in the house when Jockey Club Racecourses ambassador Bryony Frost and her ‘best mate’ Frodon won the Ryanair Chase at the Cheltenham Festival in March.

The Jockey Club’s Festival Content Team watched the race with her family and captured the extraordinary moment they celebrated with her just moments after they crossed the line in a heart-warming film. 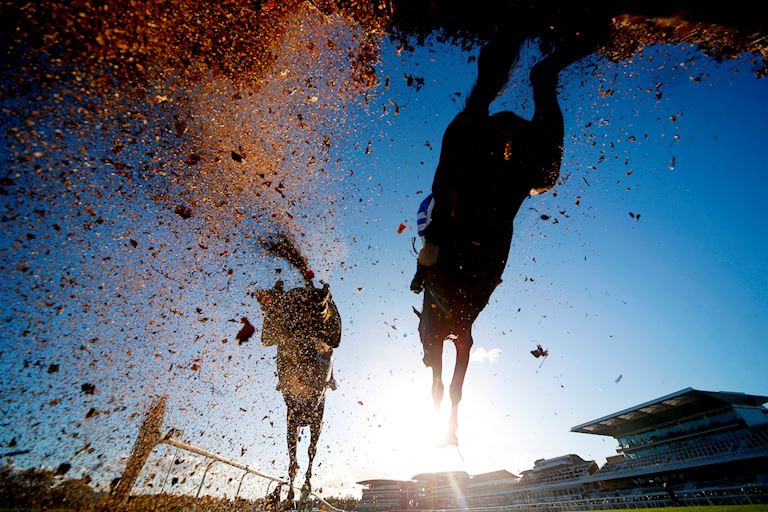 Frodon had started last season by winning the Monet’s Garden Old Roan Limited Handicap Chase with Bryony and few would argue against them repeating the feat on Sunday in a race this year sponsored by Virgin Bet.

According to the bookies Amy Murphy’s Kalashnikov will be the one they must outgun. Last year’s novice chaser is the 13-8 favourite in a fascinating six-runner contest in which Forest Bihan and Bigmartre line up for Brian Ellison and Harry Whittington respectively.

Should Frodon be successful he will become the first horse to win the race back-to-back since Monet’s Garden in 2009 and 2010. Those successes prompted the race to be named in his honour.

EIGHTY-NINE RUNNERS, LIVE BAND AND A CHARITY AUCTION AT WINCANTON

Wincanton hosts its Combat Stress Centenary Raceday on Sunday raising funds and awareness for the UK’s leading charity for veterans’ mental health in its 100th year.

While the card might lack the stars on offer at Cheltenham and Aintree this fixture promises plenty of competitive racing with a whopping 89 runners declared. And if you like a little extra with your racing there’s live music from The Bell Street Band in the parade ring before the first race and an auction with top prizes up for grabs.

Two grandstand tickets cost just £30 and under 18s – as ever – go free so it’s the perfect place to head once breakfast and the Wales vs South Africa Rugby World Cup semi-final has finished.

We’ll see you there, then.