BETFAIR CHASE WINNER CAN PROVE ONE IN A MILLION

The race for the biggest bounty in Jump racing starts at Haydock Park on Saturday with a fascinating clash between established class and huge potential in the Betfair Chase.

Not only is this the first Grade 1 race of the season, the winner will go on to collect a whopping £1 million bonus from Jockey Club Racecourses if he goes on to take the Chase Triple Crown by adding both the Ladbrokes King George VI Chase and the Magners Cheltenham Gold Cup.

It’s a big ask, and it takes a very special athlete, but Paul Nicholls did it with Kauto Star in the 2006-07 season and he announced that his Ryanair Chase winner Frodon was up for the challenge as soon as the bonus was confirmed in September. 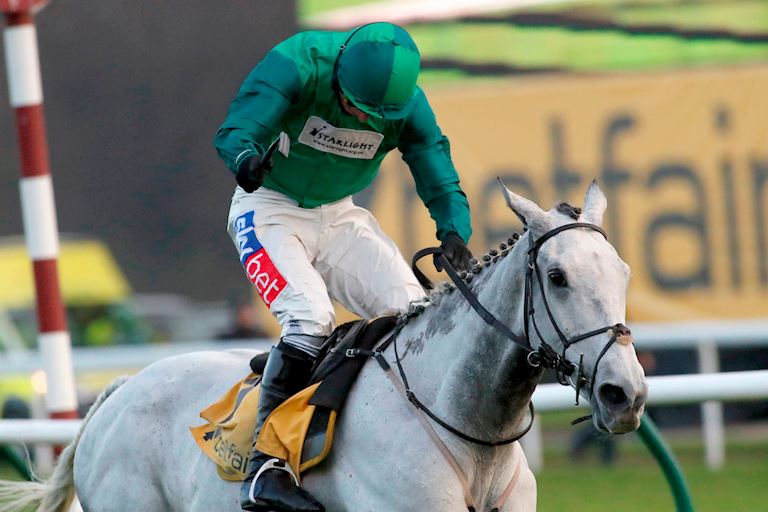 Frodon is one of the great loves in the life of Jockey Club Racecourses sponsored jockey Bryony Frost. Some still aren’t convinced about his stamina and in the build-up he has been overshadowed by both Lostintranslation and Bristol De Mai - as well as stable-mate Cyrname, who takes on Altior at Ascot just under an hour earlier. However, he has surprised us again and again in an extraordinary career, so it would be foolish to rule him out completely.

The betting, however, suggests this year’s Betfair Chase is a straight fight between Bristol De Mai, who has been there, done it, and collected the T-shirt twice already, and the young upstart Lostintranslation. The latter is a second-season chaser who gained a well-deserved first Grade 1 at Aintree in April and was absolutely faultless on his reappearance in a decent intermediate chase at Carlisle.

Bristol De Mai bids to emulate Cue Card with a third win in the Betfair Chase and to close in on Kauto Star’s remarkable four successes. He is effective elsewhere - he was third to Al Boum Photo in the Gold Cup in March after all -  but four wins from four starts at Haydock underlines that demanding fences on a flat left-handed track is a combination that brings out the very best in him.

If Bristol De Mai runs his usual Haydock race then Lostintranslation will clearly have to live up to all of the hype. And more, probably.

Last year’s Betfair Best Odds On ITV Races Stayers' Handicap Hurdle was won by a certain Paisley Park, and look where he ended up. The previous year the race was won by Sam Spinner.

Other winners in the last decade include Dynaste, Grands Crus and Diamond Harry, so there probably isn’t a better stepping stone to the top level in any handicap hurdle run anywhere all year.

Grands Crus was a 6-4 chance, having won easily at Cheltenham the previous weekend, but not all of the good winners have been quite so obvious and Saturday’s race looks open.

David Pipe, who trained both Grands Crus and Dynaste, has the likely favourite in Umbrigado, who looked exciting when winning his first three races for the stable and has had his wind tinkered with since meeting his only defeat in a Grade 1 at Aintree.

It was still a decent enough effort at Aintree, and Pipe is certain he wasn’t at his best. He’s had this race in mind since the summer, and we were reminded by Duc De Beauchene at Cheltenham last weekend what a good target trainer he is.

Jonjo O’Neill has also had this as a long-time target for Tedham, while others we have to respect include Paul Nicholls’ new recruit Highland Hunter and the Willie Mullins-trained Gowran winner Eight And Bob.

Only one thing is for sure. Whoever wins will have a lot to live up to.

SUPPORTING CAST PROMISE TO MAKE HAYDOCK THE PLACE TO BE

An outstanding supporting card at Haydock is headed by a Listed novice hurdle featuring the unbeaten pair Ballinsker and Glory And Fortune, as well as recent unlucky faller Thebannerkingrebel.

A £50,000 graduation chase also promises much, with last year’s winner Activial meets Fergal O’Brien’s Jarveys Plate, who looked so good when beating Reserve Tank at Chepstow on his chasing debut.

There is also a £50,000 handicap chase featuring Trevor Hemmings’ recent Aintree winner Burtons Well, and a £50,000 handicap hurdle in which Barry Geraghty takes over on Project Bluebook after a less experienced rider took the wrong course at Wetherby last time when the low sun was causing problems.

The afternoon concludes with a 3m 4f handicap chase in which Olly Greenall’s Uttoxeter winner Late Romantic promises to be well suited by the extreme distance.

There’s not a weak race on the card, so put the Christmas shopping on hold for another week and either get yourself there or enjoy it on ITV.

Huntingdon stages its Winter Ladies Day on Saturday, one of the most popular fixtures of the year when the course welcomes over 4,000 racegoers and pairs exciting racing with fashion, live music and a gin and jazz festival.

The Racing TV Lady Riders' Handicap Hurdle always goes down well, and some of the best female jockeys in the business have rides. Last year’s winner Lucy Barry partners Thaqaffa for Amy Murphy, while Huntingdon regulars may well be drawn to Haafapiece, representing locals Gina Andrews and Pam Sly.

Lucy Alexander, a more familiar face at Ayr or Kelso, and Aine O’Connor, who has a fancied ride for her brother-in-law Harry Fry, are among the other very capable riders in action here.

By the way, dress to impress as the Style Awards competition is free to enter.

It’s Air Ambulance Raceday at Exeter on Sunday, where a helicopter simulator, live music, and a unique Dartmoor pony race complements some excellent racing to make it a perfect day out for all of the family in picturesque surroundings.

It’s also a rare opportunity to see both four-times champion jockey Richard Johnson and his relentless pursuer Brian Hughes in action together in the West Country.

With a staggering 192 career wins under his belt already on Haldon Hill, Johnson clearly has home advantage. Hughes by contrast is still chasing his first win on the track, although in fairness he has had just four rides there.

Perhaps Just Don’t Ask, top weight in the 2m handicap chase and a horse on whom Hughes won twice two seasons ago, will take a small step towards redressing the balance.