As if we didn’t spoil you enough with last Saturday’s Investec Derby and Oaks AND the Coral-Eclipse on Sunday, we’ve got some mouth-watering action in store for you this weekend too.

Newmarket’s Moet & Chandon July Festival is one of the great weeks of the racing calendar, where fantastic action on the track meets fashion, perfectly presented plates of food and, of course, bubbles from the event sponsor.

Sadly, it’s very different this year as we continue to stage fixtures without crowds. But with ITV Racing and Racing TV broadcasting from the July Course and live action from Market Rasen’s flagship Summer Plate raceday on Friday there’s no need to miss a thing.

There are few contests worth winning in Flat racing that Frankie Dettori hasn’t already got on his CV. All five of the Classics at least once, the Coral-Eclipse and all the major Royal Ascot races too.

His success isn’t just limited to the UK, either, with victories in the Prix de l’Arc de Triomphe, Dubai World Cup and the Breeders’ Cup too.

However, there is one Group 1 race on these shores which still eludes him after all these years - the Darley July Cup at Newmarket’s July Course. This Saturday the diminutive Italian is determined to put that right on leading fancy Sceptical. 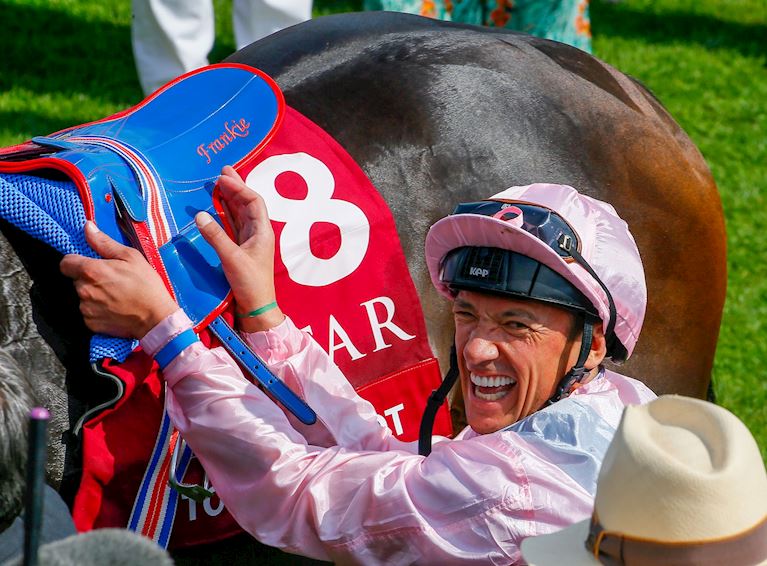 “Newmarket is my hometown and I was second AGAIN last year (on Advertise), so we’re going to try again,” he told the new Nick Luck Daily Podcast this week. “We’ve got to take on younger horses and it’s not going to be easy, but we have a good chance.”

Dettori has also described racing behind closed doors with no fans on racedays as “weird” and says the amount of top class racing since the sport resumed five weeks ago has been “crazy” – in a good way.

There might not be a crowd to see it come Saturday afternoon, but how fitting it would be if Dettori could add that final piece of the Group 1 jigsaw in the year he turns 50.

GOLDEN OPPORTUNITY FOR COX AND KIRBY

The Darley July Cup isn’t all about Frankie. Saturday’s renewal pits some top class sprinters against each other, some of them triumphant at Royal Ascot last month.

There’s good reason to believe that the best of those is Golden Horde, who won the Commonwealth Cup and has been given glowing references since by Clive Cox, his trainer. 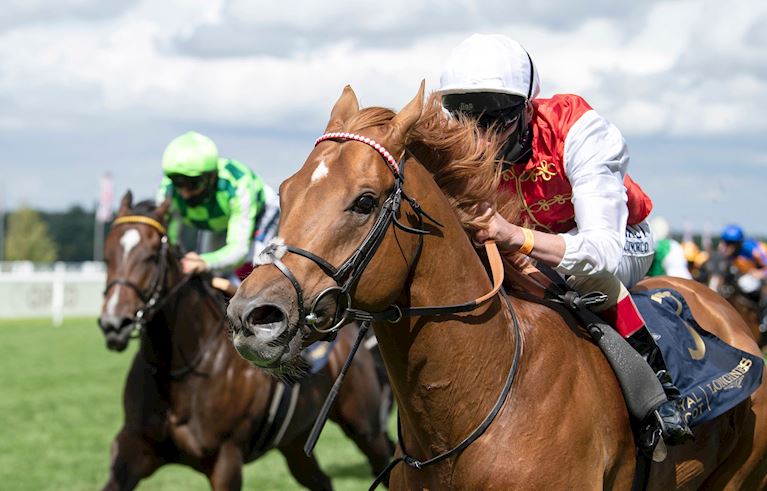 Cox himself knows a thing or two about winning this race, having saddled Harry Angel in 2017 and Lethal Force four years earlier. Adam Kirby was the jockey on both occasions and will be on board here too, so there’s lots to like about Golden Horde’s chances.

Another who was in the winner’s enclosure at Royal Ascot who lines up here is Hello Youmzain. A general 5-1 chance for the flagship race of the July Festival, jockey Kevin Stott will be excited about his chances of following up their victory in the Diamond Jubilee Stakes.

That day he not only beat Dettori’s mount, Sceptical, but another two who are expected to run here, Khaadem and Shine So Bright.

Others of interest include Oxted, who won the Betway Abernant Stakes at the QIPCO Guineas Festival four weeks ago, and the evergreen Judicial, who won last time out at Newcastle for the Elite Racing syndicate at the grand old age of eight.

FRANKIE'S FILLY CAN BE 'BELL OF THE BALL

Even we’ll admit that it can sometimes be a bit repetitive writing about that man Dettori week in week out. But if he didn’t have so many quality rides in the big races then we wouldn’t have to.

The Tattersalls Falmouth Stakes is one of THE contests of the season for fillies and mares of all ages, run over a mile on the Friday of the July Festival.

Frankie has only won this race once before, 12 years ago on Nahoodh, but if the bookmakers have got this right then he’s about to make that twice. The Godolphin filly Terebellum, trained by John Gosden, is the 4-5 favourite and it’s easy to see why after winning the Betfair Dahlia Stakes at Newmarket during the QIPCO Guineas Festival and just missing out at Royal Ascot 10 days later to Circus Maximus.

Gosden has the second in the market here too, Nazeef with Jim Crowley on board. She won the Duke of Cambridge Stakes at Royal Ascot three weeks ago by just a head from Agincourt, who is also expected to line up here for David O’Meara.

Aidan O’Brien has won two of the past four renewals and has Magic Wand running here, just five days after finishing fourth in the Coral-Eclipse at Sandown Park on Sunday behind Ghaiyyath and Enable.

One final word is for Billesdon Brook, who Newmarket regulars will recall as the shock 66-1 winner of the 2018 QIPCO 1000 Guineas. Victory here, it must be said, would be just as surprising.

GOSDEN HOPING TO BE IN SEVENTH HEAVEN

We had hoped to be seeing the favourite for NEXT year’s Investec Derby, Battleground, in Saturday’s Group 2 bet365 Superlative Stakes.

Aidan O’Brien has other plans for his star two-year-old colt and pulled him out of this contest midweek, but that doesn’t change the fact that this is a very competitive juvenile race.

The current favourite is John Gosden’s Seventh Kingdom with young David Egan on board, a pairing with a 100% record having won over 7 furlongs at Doncaster last month.

O’Brien isn’t without a chance and has the second in the market, Hudson River, partnered by Ryan Moore. Another horse with one win from one start to his name and there might not be much between them. 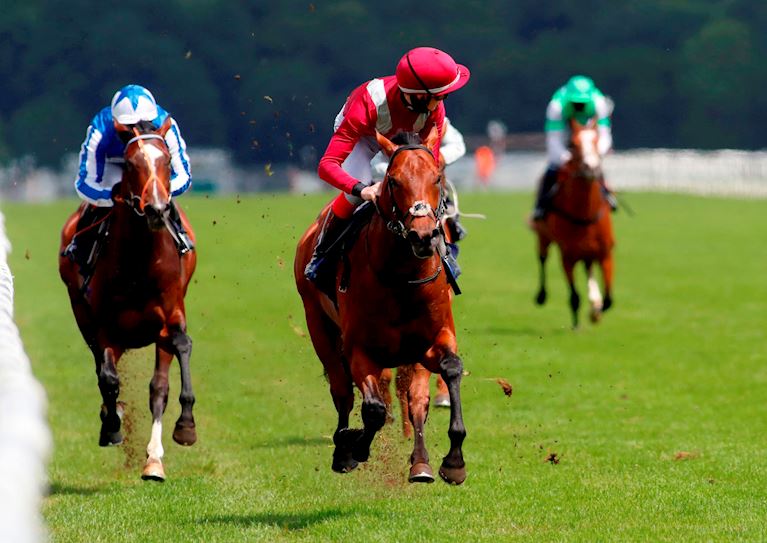 Other dangers include Master Of The Seas for the in-form Charlie Appleby and William Buick combination, who are looking to give Godolphin their fourth winner of this contest in the last six years.

Richard Hannon, who trained last year’s winner of the Superlative, has Ventura Tormenta at a bigger price.

MARKET RASEN CONTENDERS HAVE PLENTY ON THEIR PLATE

Summer jump racing is back and on Friday Market Rasen serves up the most high profile race since the 2020-21 season started just a few days ago.

In truth the Betway Summer Plate is likely to prove a trickier puzzle to solve than in previous years, due in part to the fact not a single one of the field has been seen on a racecourse inside the past 100 days.

There are some familiar names to racegoers on show here and 11-time Champion Trainer Paul Nicholls has two of the first three in the betting. Among them is the popular San Benedeto, ridden by Jockey Club Racecourses-sponsored Bryony Frost and in the famous Frodon colours.

San Benedeto’s record in the last three years of just one win from his last 19 starts might be a concern and Nicholls’ other runner, Lough Derg Spirit was only recruited to his yard in the past few weeks and might appeal more.

Another unknown quantity for this test is Harry Fry and Sean Bowen’s Bags Groove, a horse who didn’t set foot on a racecourse once last season. He has an impressive nine wins from 19 career starts to his name, but he hasn’t been seen for 463 days, has had a wind operation since and has never run at Market Rasen, so we wouldn’t blame you for having doubts.

One more for the notebook might be Solomon Grey, whose trainer-jockey brother combination of Dan and Harry Skelton won this race four years ago with Long House Hall.

Just as their 2016 winner was at the time, Solomon Grey is eight years old going into this. But we should probably also point out that none of his previous four wins have been over a distance further than 2 miles – and this is 2 miles 5 and a half furlongs.

Puzzled? We did warn you.