There aren’t many weekends in the entire year which offer so much competitive racing across three of our courses than this one.

Saturday sees the Betfair Tingle Creek at Sandown Park and the William Hill Becher Chase at Aintree. And then it’s off to Cambridgeshire on Sunday for Huntingdon’s feature raceday of the year, the Fitzdares Club Loves the Peterborough Chase.

Racing at all three courses takes place in front of a limited number of spectators for the first time in more than eight months.

But if you’re not lucky enough to have a ticket, the action on both days is covered by ITV Racing and every race is live on Racing TV. Here we take a look at five things you need to know before the off.

ALTIOR AND POLITOLOGUE GIVE RACEGOERS THE TINGLES

If you’re not excited at the prospect of Altior and Politologue going head to head for Saturday’s Grade 1 Betfair Tingle Creek then Jump racing (and this column, to be honest) is probably not for you.

With two of the sport’s greatest equine athletes in training doing battle at 2.25pm, it’s no wonder that our general admission tickets for Saturday at Sandown Park sold out in just 17 minutes.

Altior might be 10 years old but he’s still all class and trainer Nicky Henderson insists his stable superstar is much further forward for his preparation than he was this time last year.

His seasonal reappearance last year ended in defeat to Cyrname at Ascot, but Henderson expects him to show he is back to his best when first time out this season when he comes up against old foes in Politologue and trainer Paul Nicholls on Saturday. 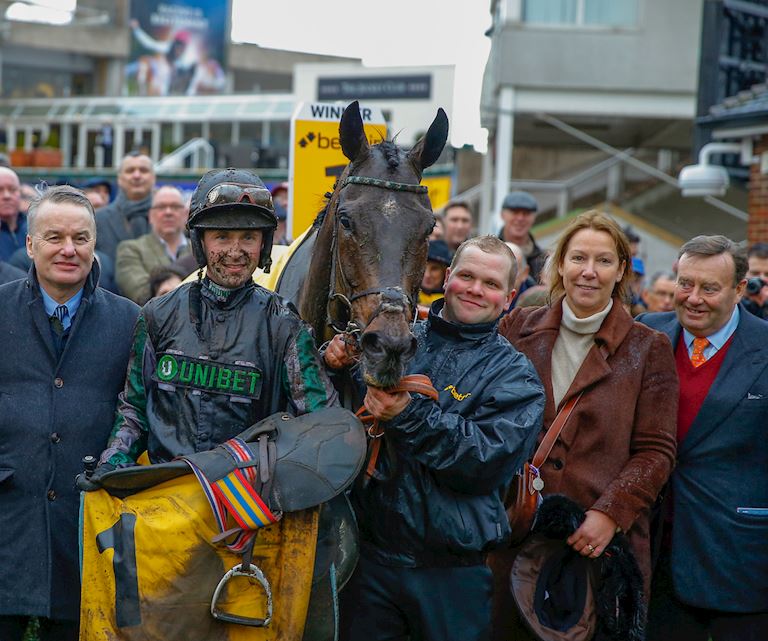 Altior won this in 2018 when seeing off only three rivals but the previous year Politologue had won a thrilling contest to edge out Fox Norton by half a length. Politologue won the Queen Mother Champion Chase at the Festival at Cheltenham this March, but that was a race without Altior, who had the previous two renewals.

Politologue has never beaten Altior – in fact Henderson’s star has only ever lost once over fences from 16 runs and that was to Cyrname – but the scene is set for an almighty battle here.

And while all the attention will be on them, it would be foolish to overlook Rouge Vif for in-form trainer Harry Whittington, who couldn’t have won more impressively at Cheltenham’s Showcase fixture in October.

The stage is set and we even have a live audience to see it.

SNOWDEN BELIEVES PUNTERS SHOULD ABIDE BY THE LAW

The Tingle Creek isn’t the only two mile chase to capture the imagination at Sandown Park on Saturday afternoon. The race which precedes promises to be a thriller in its own right.

Jamie Snowden’s Ga Law has been hugely impressive this season while chalking up three wins in as many runs and his trainer was very complimentary when asked about his chances in the Planteur At Chapel Stud Henry VIII Novices’ Chase.

Among the entries are Harry Skelton’s Allmankind, who was foot perfect and looked like he has a big future over fences when winning last time out at Warwick a month ago, and Nicky Henderson’s Fusil Raffles who pulled up at Cheltenham last month having won his first two races over the larger obstacles in September and October this year.

But Snowden holds no fears for his improving four-year-old, who only had one mediocre run over hurdles last season before announcing himself in style over fences this term.

It’s a first attempt at two miles for Ga Law, but Snowden insists: “He has looked pretty impressive in his first three starts over fences. Dropping back in trip is the one question mark, but his half-brother wanted two miles and there is no reason why this chap can’t.”

You have been warned.

WALK IN THE MILL BIDS FOR HAT-TRICK OVER NATIONAL FENCES

We all love a contest over the Grand National fences and with this year’s race having to be cancelled due to COVID-19, this Saturday will be the only time in 2020 we’ll get to see one.

The William Hill Becher Chase at Aintree also throws up the possibility of a hat-trick for Walk In The Mill, who won this race for trainer Robert Walford in 2018 and 2019.

If this year’s Randox Health Grand National had taken place, Walk In The Mill would have been a popular choice with punters having finished fourth behind Tiger Roll in 2019. And in this Grade 3 contest worth £120,000 it’s highly likely he’ll start as favourite.

The 17 runners confirmed earlier this week also included other Grand National contenders in Kimberlite Candy, who finished runner-up in the Becher Chase last year, Yala Enki and Give Me A Copper, owned by Sir Alex Ferguson. 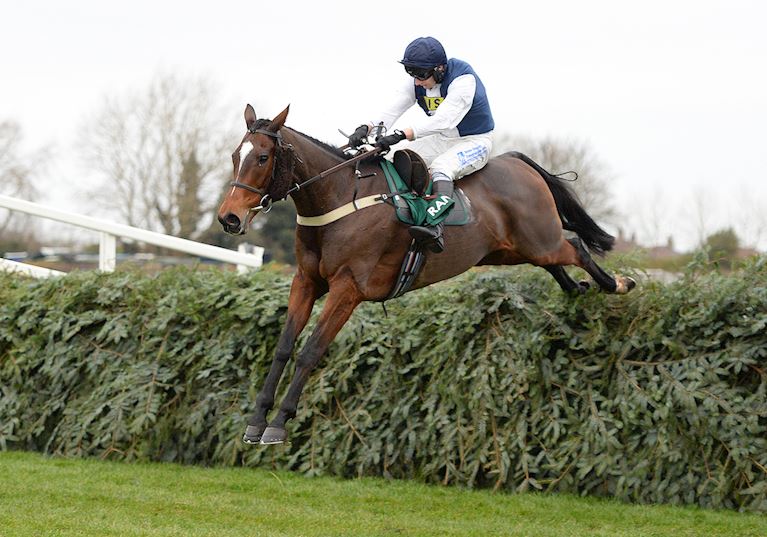 Jonjo O’Neill’s horse went straight into many people’s notebooks as a big chance for the 2021 Grand National after that victory and there will be plenty of racing fans watching how horses jump these fences on Saturday with next April in mind.

POPULAR CHASER MIGHT BE WORTH TAKING A CHANCE ON

The Becher Chase isn’t the only race over the iconic National fences on Saturday, and the shorter William Hill Grand Sefton Chase over 2m5f promises to be just as competitive.

Modus for Paul Nicholls was an impressive winner at Aintree less than a month ago over conventional fences and is the 7-1 joint favourite at this stage, alongside Huntsman Son for trainer Alex Hales.

But it’s the name Might Bite which catches the eye in this field. Jumps fans will remember him for an extraordinary win in the RSA Novices’ Chase at the Cheltenham Festival in 2017, when he wandered around after the final fence and then came back again to defeat Whisper.

He then went on to win the King George VI chase at Kempton Park on Boxing Day the same year, before finishing a gallant second in the Cheltenham Gold Cup later that season.

Might Bite pulled up in the Gold Cup 12 months later and since that run Nicky Henderson has been trying to work out what to do with him. Schooling him over hedgerow and pitching him in cross country races might not have seemed the most logical route for a Grade 1 winning staying chaser.

But by all accounts he loves the different challenge, so perhaps it’s no surprise to see him line up here, carrying the multi-coloured silks of the Knot Again Partnership.

He’ll likely start around 12-1 on Saturday afternoon alongside the likes of Springtown Lake, Crievehill and Lord du Mesnil.

One thing’s for certain – if he wins the Grand Sefton then the reception he gets will suggest there are a lot more than the maximum 2,000 racegoers inside Aintree.

TOP NOTCH COULD WRITE HIS NAME IN THE HUNTINGDON HISTORY BOOKS

If you need reminding how seriously trainers treat the Grade 2 Fitzdares Club Loves The Peterborough Chase, the 14 entries confirmed on Monday had 98 race victories and more than £2million of prize-money between them.

Sunday’s action will be the first time since March 11th that the racecourse has been able to welcome spectators and what a treat in store. It’s also the first time the race will be shown live by ITV Racing.

This is a race won by many of jump racing’s most famous names over the years, including Best Mate, Edredon Bleu, One Man and Wayward Lad and it’s one of the race’s other previous winners who heads this year’s the line-up.

Top Notch was successful in 2017 and last year and the nine-year-old will be bidding to become only the second three-time winner of the race in history, after Edredon Bleu, who was victorious four times in total.

Hi trainer Nicky Henderson said on Monday: “He likes it there (Huntingdon) so we thought we better go again. He had a little wind-op a couple of months ago, which we always thought might help him, but it just held him up a little. Otherwise, he’s in very good form and we’re all good to go.”

The yard have also entered Mister Fisher, who pulled up in the Paddy Power Gold Cup at Cheltenham three weeks ago and Henderson believes that if the rain stays away there’s a good chance he’ll be there or thereabouts.

Another interesting contender is Nuts Well, who defied top-weight to win the Grade 2 Monet’s Garden Old Roan Chase at Aintree six weeks ago. Owned and trained in Northumberland by 68-year-old Ann Hamilton and her 73-year-old husband Ian, Nuts Well is one of only six horses stabled at their cattle farm, which is the Hamilton’s main occupation.

Cheltenham Festival winner Simply The Betts is also in the field, after finishing a creditable sixth on his return in the Paddy Power Gold Cup at Cheltenham’s November Meeting three weeks ago.

The seven-year-old won the Brown Advisory & Merriebelle Stable Plate in March and from what trainer Harry Whittington said on Monday he will be a leading contender when the tape goes up.

Five things we learned at Haydock Park on Saturday

Five things you need to know about Saturday's racing