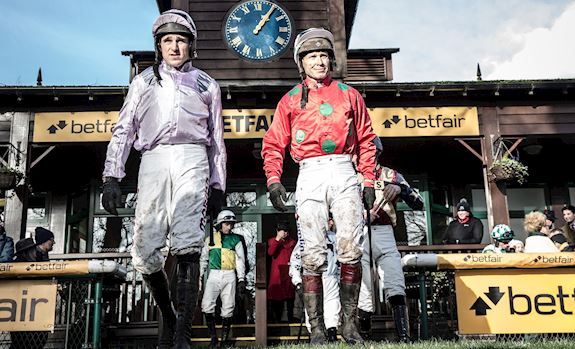 Some of horseracing’s top jockeys have collaborated to give a light-hearted insight into life behind the scenes, naming and shaming their rivals and even confessing their own shortcomings in a series of short films.

Famous names from Britain and Ireland’s jump racing circuit have been filming for The Jockey Club’s ‘Inside The Weighing Room’ series, which launches today, giving their frank verdicts on those with the worst habits.

The short videos give jockeys the chance to name the worst dressed, most vain, worst drivers, the most intelligent and even outing those who manage to keep their weight down despite not watching what they eat.

However, in many cases jockeys are quick to point the finger at themselves with one admitting crashing his car just a few days earlier and others revealing how they are often grumpy and tight with their money.

Eight films are being released – one per day - in the run-up to the 2019 Cheltenham Festival™, presented by Magners, which starts on Tuesday 12th March and is staged by The Jockey Club.

The first in the series gives viewers the chance to find out who the ‘biggest moaner’ in the weighing room is – and Daryl Jacob does not come off well.

The videos are designed to give racing and sports fans an insight into what goes on behind closed doors, while also giving jockeys the chance to share the secrets of the weighing room with the world.

The Jockey Club is one of the leading leisure companies in the UK and the largest commercial group in British horseracing, staging events including the Randox Health Grand National, The Cheltenham Festival and The Investec Derby. Governed by Royal Charter, every penny The Jockey Club makes goes back into British Racing to help the sport thrive.

NOTE: The first video can be used in articles by downloading it via the link below.