To celebrate Randox Health Grand National day The Jockey Club has teamed up with two Marvel illustrators to produce a comic strip for the big day. 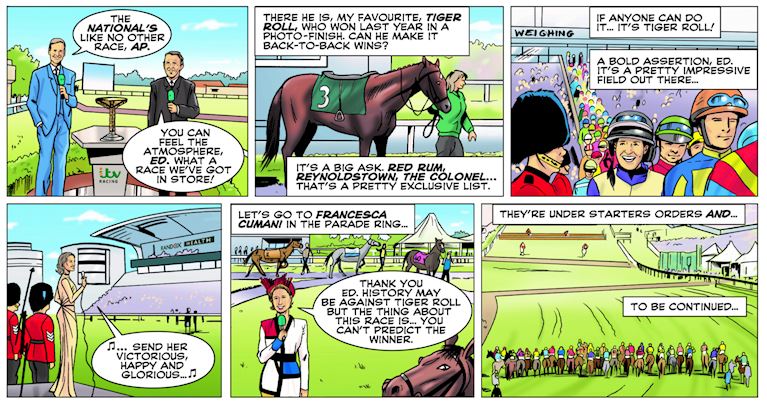 Published exclusively by The Daily Star the strip sets the scene for the race the world stops to watch.

ITV Racing’s Ed Chamberlin, Sir AP McCoy and Francesca Cumani are shown talking about the chances of race favourite Tiger Roll, who could become the first horse since Red Rum in 1974 to win back-to-back Grand Nationals.

Soprano Laura Wright, who sings the National Anthem before the 5.15pm showpiece, also features in the comic, along with iconic images of jockeys walking down the famous Weighing Room steps and the 40 contenders lined up at the start of the race.

A 24-page Magnificent Racehorses comic is available for FREE via The Jockey Club’s website. Download directly and enter a competition for your chance to win one of 10 signed copies by the 2019 Grand National winning jockey, ITV’s Ed Chamberlin and Sir AP McCoy.