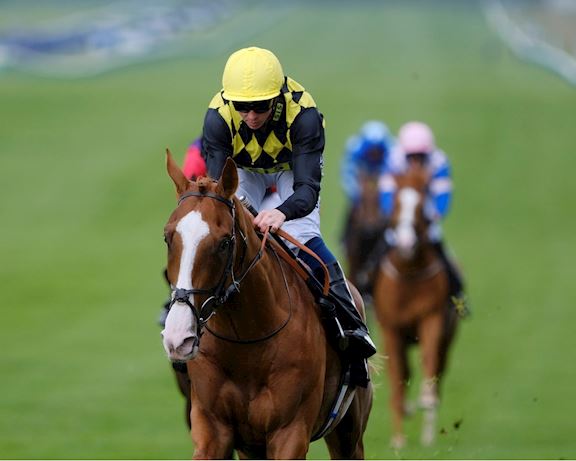 18th May 2019 – Last year’s renewal of the Listed Betway Fairway Stakes produced a subsequent Royal Ascot winner in Old Persian and the race went the way of another talented individual once again in the shape of Raise You, who could now head to Chantilly for the QIPCO Prix Du Jockey Club on Sunday, 2nd June.

Raise You, trained by Andrew Balding, came to Newmarket’s Rowley Mile Racecourse today (Saturday) on the back of a six-length maiden success at Newbury last month and enhanced his reputation with an authoritative win.

In a race that included Al Hilalee, who was supplemented for the QIPCO 2000 Guineas, and the highly-regarded Khuzaam, who holds an entry in the Investec Derby at Epsom, Raise You led a group that raced closer to the centre of the track than those on the stands rail and was never threatened.

At the line, Raise You was three and three quarters of a length clear of Eightsome Reel, with Al Hilalee another length and a half away in third, leaving owner Jonathan Palmer-Brown eyeing the Group 1 QIPCO Prix Du Jockey Club at Chantilly in a little over a fortnight.

Should connections ultimately decide to head down the Classic route, jockey David Probert is confident the colt, a son of the 2010 Prix Du Jockey Club winner Lope De Vega, will not be out of place.

“It was a lot drier than it was at Newbury when he won there. He was coming here in good form, trying ten furlongs for the first time and was pretty impressive,” said Probert.

“He’s got a really good engine and a great stride on him – he put that race away very nicely in the end. Wherever he goes next, he’s got a lot of stamina and talent, so I expect it’ll be somewhere decent.”

The sponsor, Betway, introduced Raise You to their QIPCO Prix Du Jockey Club betting at 10-1 following his victory.

Trainer Simon Crisford always hoped he would be celebrating victory with Jash at Newmarket’s Rowley Mile this spring and although it came a few weeks later than planned, he was no less delighted with the effort of the colt in winning today’s Betway King Charles II Stakes.

Owned by Sheikh Hamdan Al Maktoum, Jash had been thought of as a potential QIPCO 2000 Guineas contender earlier in the year, following his half-length second behind Ten Sovereigns in the Group 1 Juddmonte Middle Park Stakes at the Rowley Mile last autumn.

But with Crisford unhappy with Jash’s progress in the early stages of the spring, those Classic hopes were shelved. The three-year-old would instead take part in a racecourse gallop at the Rowley Mile on Wednesday, 1st May prior to his reappearance in today’s Listed contest, staged over seven furlongs.

The trainer’s patience was ultimately rewarded as Jash, ridden by Dane O’Niell, got the better of Azano by a neck, with a further nose to Watan in third. Despite the close nature of the finish, Jash always gave the impression of being in control of proceedings.

Crisford, who trains locally in Newmarket, said: “I’m very satisfied that he’s won and I think he’s going to improve a lot. He’s taken a long time to come to himself this year, so we haven’t been in a position to run him before today. We had to rule out the Guineas and all of those prep races because he just hadn’t blossomed but he is coming now.

“He was having a proper blow [after the race]. He was just ready to go to the races today and I’m sure we’ll see an improvement.”

On where Jash could race next, Crisford added: “I want to talk to his owner and see how he comes out of this race but the timing is good for Royal Ascot, obviously. We haven’t crossed the bridge yet as to whether he runs over seven or six furlongs.”

Betway trimmed Jash’s odds for the Commonwealth Cup from 14-1 into 12-1 following the win.