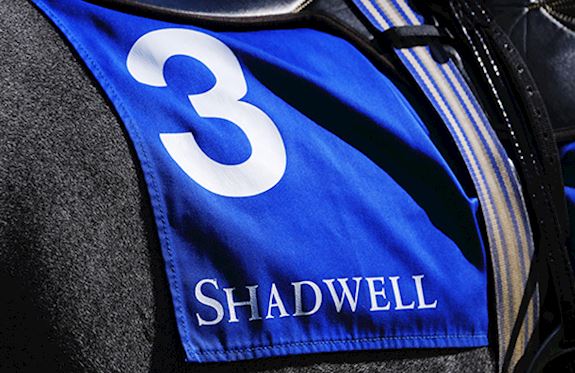 25th September 2019 – Local trainer Roger Varian holds a strong hand with one third of the nine-runner field in the £100,000 Shadwell Rockfel Stakes, one of two Shadwell-sponsored Group 2 feature races at Newmarket’s Rowley Mile Racecourse on Friday (September 27th) - the middle day of its three-day Cambridgeshire Meeting.

Daahyeh, winner of the Group 3 Albany Stakes at Royal Ascot prior to finishing runner-up in both the Group 2 Duchess Of Cambridge Stakes (sponsored by bet365) at Newmarket’s Moët & Chandon July Festival and the Group 1 Moyglare Stud Stakes at The Curragh ten days ago, spearheads the Varian challenge.

Daahyeh will be ridden by William Buick while the master of Carlburg Stables will also be represented by Stylistique, the mount of Frankie Dettori, and Alash Orda, who will be partnered by David Egan.

Stylistique finished fourth in the Group 3 Prestige Stakes at Goodwood before being caught on the line when carrying top weight in a valuable nursery at Doncaster’s St Leger Festival, while Alash Orda, a half-sister to this year’s Group 1 Tattersalls Falmouth Stakes runner-up, Altyn Orda, was second on her only start, in a maiden at Salisbury on 5th September.

Other leading candidates for this seven furlong contest for two-year-old fillies include the Group 3 Princess Margaret Stakes heroine, Under The Stars, and the Aidan O’Brien-trained Irish raider, Blissful, successful in Listed company at Leopardstown two weeks ago.

Varian will be a busy man on Friday as he also saddles the unbeaten UAE Jewel in the Group 2 Shadwell Joel Stakes, a £100,000 one mile event for three-year-olds and above.

UAE Jewel has not raced since winning his second start, the Listed Lightning Spear Newmarket Stakes, over a mile and a quarter of the Rowley Mile back in early May. But he did take part in a public gallop at this course last Saturday.

His stiffest opposition in this seven-runner event could come from the Group 1 St James’s Palace Stakes second and Group 1 Juddmonte International Stakes fourth, King Of Comedy, and Benbatl, a Group 1 winner on three different continents who has not been seen since chasing home the Australian wondermare, Winx, in the Cox Plate in Melbourne 11 months ago.

“Daahyeh ran great in the Moyglare Stud Stakes on her first try at seven furlongs when she was coming back after a bit of a break. I am really happy at how she has come out of that race and am very much looking forward to running her in the Shadwell Rockfel Stakes.

“It was a tight decision choosing between running her here or in the Cheveley Park Stakes on Saturday. But the long term plan may include taking her over to the Breeders’ Cup Juvenile Fillies’ Turf over a longer trip so it seemed sensible to stick at seven furlongs instead of yo-yoing back down to six.”

[The Shadwell Rockfel Stakes is a Breeders’ Cup ‘Win And You’re In’ Challenge Series race. The winner gets a guaranteed place in the field for the $1 million Breeders’ Cup Juvenile Fillies’ Turf over a mile at Santa Anita on Friday 1st November]

“Alasha Orda is a lovely filly who is making a big jump in class but she will be a nice horse in time.

“Stylistique is getting better and better and although she is still a maiden I don’t believe that her current handicap mark of 98 flatters her or is any kind of fluke. She won’t have to improve much to make the frame on Friday.

“It looks like a strong renewal of the Shadwell Joel Stakes but the timing of the race fits well for UAE Jewel and it should be a good starting point to get his career back on track.

“I was in two minds about running him over this mile trip or waiting for something over a mile and a quarter and he would not want too much more rain as he is a fast ground horse.

“He had a setback when we were preparing him for the Prix du Jockey-Club back in the spring but is ready for a run now.”