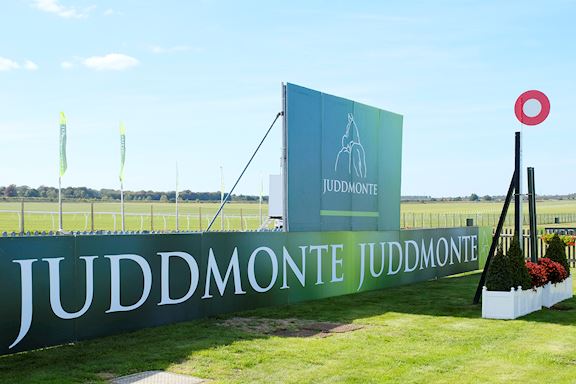 26th September 2019 – The much-anticipated clash between three unbeaten colts – Siskin, Earthlight, and Mums Tipple – in the Group 1 Juddmonte Middle Park Stakes is just 48 hours away and Siskin’s trainer, Ger Lyons, can barely control his excitement as he waits for the £275,000 contest to get under way at Newmarket’s Rowley Mile Racecourse on Saturday.

The Juddmonte Middle Park is just one of a number of top class events on a seven-race Juddmonte Day card. It features another Group 1 two-year-old race over the same six furlong trip, the £291,580 Juddmonte Cheveley Park Stakes, not to mention the Group 2 £125,000 Juddmonte Royal Lodge Stakes and the £160,000 bet365 Cambridgeshire Handicap.

Representing Ireland, where he is trained by Ger Lyons, Siskin is a Juddmonte Farms home-bred who has progressed rapidly through the ranks, maiden, Listed and Group 2 victories being followed by success at the top level in the Phoenix Stakes, when he beat fellow Juddmonte Middle Park candidate, Monarch Of Egypt, by three-quarters of a length.

Trained in France by Andre Fabre, Earthlight has a similar profile though his Group 1 win, in the Prix Morny, came in arguably the best juvenile race run in Europe so far this season as both the fifth and eighth home that day have subsequently scored in Pattern company.

Mums Tipple is less battle-hardened than the other two unbeaten colts with just two races under his belt. His most recent win, however, came by the incredible margin of 11 lengths, in a 21-runner £148,000 sales race at York’s Ebor Festival.

His handler, Richard Hannon, also has a classy second candidate in the shape of the dual Group 2-winner, Threat, while Aidan O’Brien, trainer of Monarch Of Egypt and responsible for the last two winners of this race, is three-handed, also saddling Lope Y Fernandez and King Neptune, among an eight-strong field.

11 fillies will go to post for the Juddmonte Cheveley Park Stakes. The stand-out performer here is Raffle Prize, runner-up to Earthlight when taking on the boys in the Prix Morny and earlier successful in two Group 2s - the Queen Mary Stakes at Royal Ascot and the Duchess Of Cambridge Stakes (sponsored by bet365) at Newmarket’s Moët & Chandon July Festival.

Pick of her opponents could be two more Group 2 scorers – the Fabre-trained Prix du Calvados heroine, Tropbeau, and Karl Burke’s Living In The Past, successful in last month’s Lowther Stakes.

Juddmonte Day gets under way at 1.50pm with an eight-runner field for the Group 2 Juddmonte Royal Lodge Stakes over a mile headed by the narrow Group 3 Solario Stakes runner-up, Kameko.

And a field of 33 runners has been attracted to contest the biggest betting turnover race of the day, the bet365 Cambridgeshire Handicap, at 3.40pm.

“I think that Siskin is as well as we have ever had him – we couldn’t be happier with him. He’s a very straightforward horse and thus far everything has gone to plan.

“I am relishing being involved in such a hugely strong renewal of the Juddmonte Middle Park Stakes – it’s absolutely what we do the job for and it’s fantastic to have a horse of Siskin’s calibre to make it possible.

“I will be very surprised if either the course at Newmarket or travelling outside Ireland for the first time bother him – my only concern is the opposition.

“What Mums Tipple achieved at York was seriously jaw-dropping and I have huge respect for Earthlight, the other Group 1 winner in the field, who is in the hands of one of the best trainers on planet earth.

“I wish they weren’t turning up, but they are, and all I can say is ‘may the best horse win’.

“Siskin is going for five-in-a-row and hoping to be regarded as the best six furlong colt around. Even then, he may not be crowned Champion Two-Year-Old as it’s such a phenomenally strong year for two-year-old colts, with the likes of Pinatubo on the scene.

“If we were lucky enough to win, it would give added pleasure that the Juddmonte Middle Park is sponsored by his owner-breeder, Prince Khalid [Abdullah].”